Pride Parades in the U.S. Take a Somber Tone After Orlando

Photographs of the victims of the Orlando Pulse nightclub shooting are laid out prior to the start of the 46th annual gay-pride march in New York City on June 26, 2016
Bryan R. Smith—AFP/Getty Images
By Rishi Iyengar

Sadness and symbolism rang heavy at LGBT pride parades across the U.S. on Sunday, as millions marked the annual event two weeks after the fatal mass shooting at a gay nightclub in Orlando.

Tributes to the Orlando shooting victims were ubiquitous, with marchers at the front of the parade in Chicago carrying photos of each of the 49 people killed and several others carrying balloon letters spelling out PULSE. The nightclub’s owner, Barbara Poma, and its entertainment manager, Neema Bahrami, were atop the first of 85-odd floats in New York City.

The parade ended at the Stonewall Inn, the bar where a police raid in 1969 sparked riots and rallies considered the inception of the LGBT rights movement in the U.S. On Friday, President Obama immortalized the venue by declaring it a national monument. 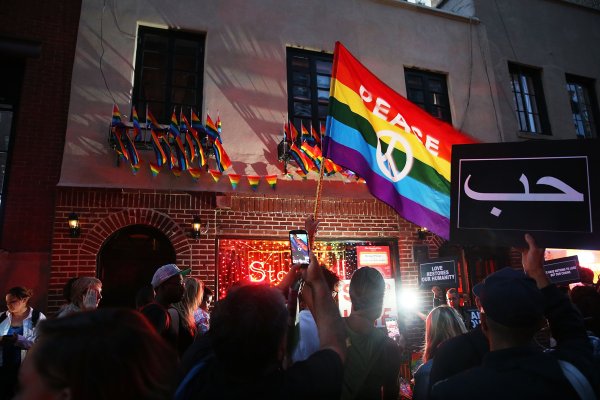 Stonewall Is the First National LGBT Rights Monument. It Won't Be the Last
Next Up: Editor's Pick