What Brexit Means for the U.S. Election

The United Kingdom’s decision to leave the European Union set off a panic not just in the global financial markets but also inside Democratic circles. If a brew of anti-trade, anti-immigrant and pro-nationalist sentiments could prevail in the U.K., what’s to say it won’t dominate in, say, Ohio?

Presumptive Republican nominee Donald Trump has made the same notions that fueled the Brexit campaign central to his campaign. He has promised to renegotiate trade deals and bring factories back to U.S. soil. He has vowed to build a wall along the U.S.-Mexico border and to deport immigrants in the country illegally. His “Make America Great Again” slogan is just a half-degree short of ultra-nationalism. Those feelings ushered him to the top of the GOP ticket, and ushered the U.K. out of the E.U.

The parallels with Trump’s slogans have the campaign of his Democratic rival, Hillary Clinton, nervous. Publicly, officials were warning that Trump’s policies would make Friday’s market panic look small. They told reporters that the international instability caused by the Brexit would be replicated if America, too, withdrew from the global marketplace, and that a Trump presidency would cost ordinary investors their retirement funds. They also had their favorite tool: math.

“We believe that American working families are going to see the results of the vote today and really ask themselves whether they’re looking for economic uncertainty, risk, dangerous propositions,” Clinton policy adviser Jake Sullivan said.

But there was the recognition that they might have underestimated the populism, anti-immigration and anti-Establishment fervor that broke forth in the U.K. and could spread to the United States. “They’d be foolish if Brexit didn’t make them question some assumptions,” one Clinton ally said. “This wasn’t a one-day episode. These feelings are real,” said another. And the U.K. might not be the last time citizens rebel against the status quo; France and Austria were considering a similar in-your-eye statement.

On a half-hour call with reporters on Friday, organized to criticize Trump’s comments in Scotland, the questions largely were about whether the Clinton campaign was worried that the Brexit might foretell risks in the United States. Finally, Clinton communications maven Jennifer Palmieri cut it off. “United States. Different country than the United Kingdom,” she told reporters who pressed her on how much Brexit shapes the next five months of Clinton’s campaign. But it was clear that the news would affect their next steps.

Clinton’s team has been worried about Trump’s appeal, especially in places like the industrial Midwest. His pitch on bringing back American jobs has resonated, and not just with Republicans. In his crowds, there are often union members who remember when manufacturing jobs were easy to find and paid well. Many blame trade policies, which Clinton supported, for their fading lifestyle. And even those who don’t like Trump can find his confidence in bringing back jobs assuring.

It’s partially why Clinton will have three trips to Ohio in as many weeks, including a stop next week with progressive hero Elizabeth Warren. The value of that swing state battleground is tough to over-sell: No Republican has ever won the Presidency without Ohio, and the last Democrat to do so was John F. Kennedy.

It’s partially why Clinton’s team largely ignored that global economic implications of the U.K.’s vote and instead kept the focus on pocketbook issues. “We can see from the falling markets today, the economic uncertainty created by this vote carries a risk of hitting the pocket books of American families,” Sullivan said. “Their savings, their livelihoods, and, so, Hillary Clinton has made clear that the first priority has to be to make sure that working families here in America aren’t hurt by this vote and its aftermath.”

Trump was more casual about the fall-out. “Basically, they took back their country,” Trump said. That us-versus-them has been a cornerstone of Trump’s campaign—and a theme he will continue hammer with voters who blame their economic uncertainty on the them.

Clinton’s advisers, however, are telling nervous allies they have trends on their sides, and are offering specifics on why voters still are likely to be with her in the fall. For instance, take Ohio. Since 2000, the Hispanic population there has grown by 76%. Those voters helped build comfortable Democratic majorities in the urban centers.

Or look at Franklin County, home to the state capitol. Democratic nominees have gone from carrying the county by just 4,156 votes in 2000, to crushing it by a 117,713-vote margin in 2012. It’s that math that Clinton’s campaign keeps reviewing. Her strategists are, for now, sticking with a plan grounded in math over feelings.

“It will be a grind, but there’s a reason we aren’t panicked,” a third Clinton ally said. “Unlike the U.K., we’re not going to go on emotion here.” 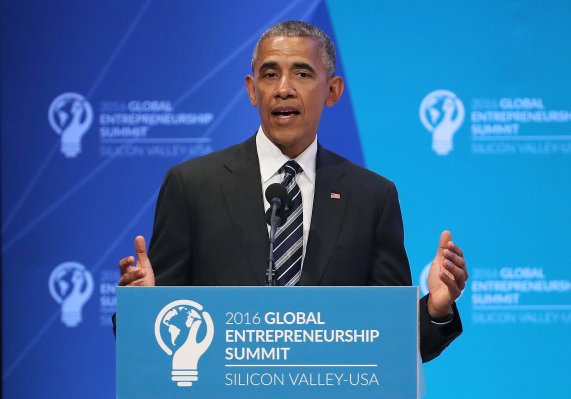 Read President Obama's Remarks on 'Brexit' and Globalization
Next Up: Editor's Pick