Former PM of Belgium: Brexit Can Save Europe From Itself

Guy Verhofstadt, Belgian member of the European Parliament, leader of the Alliance of liberals and Democrats for Europe (ALDE) group, and former Belgium prime minister, speaks to journalists after a meeting with French President at the Elysee Presidential Palace, in Paris on Sept. 29, 2015.
Thomas Samson—AFP/Getty Images
Ideas
By Guy Verhofstadt
Verhofstadt is former Prime Minister of Belgium, leader of the liberals in the European Parliament and author of the forthcoming book Europe’s Last Chance

So, Great Britain has voted to leave.

The good news is the Brexit vote did not lead to the complete chaos some had predicted, but it has created a lot of confusion. Boris Johnson, the most prominent Brexiteer, did not seem happy at all during his press conference the day after. He sounded uncharacteristically timid and declared the outcome of the referendum won’t change a lot for his countrymen who want to work and leave in the E.U. An almost absurd message. Nigel Farage from the U.K. Independence Party said it was wrong of the “leave” camp to promise that the National Health Service would get 350 million pounds per week extra if Britain would leave the E.U.

While the declarations of the victorious “leave” camp were surprisingly tepid, the uproar from Scotland and the European continent were harsher than many expected. The Scottish Prime Minister Nicola Sturgeon announced plans for a second referendum on the secession of Scotland from the rest of the U.K., because “the Scottish people have voted overwhelmingly to remain in the EU.” The rest of the European member states almost unanimously said Britain should leave the union quickly. The reaction left a lot of Brits with an eerie feeling: What is going to happen now that the Brexiteers have become the softies and the rest of Europe the hardliners?

The biggest risk that the E.U. currently faces is that Brexit negotiations will now drag on for years and will be added to the long list of its never-ending crises: the Greek crisis, the migration crisis, an unresolved economic crisis and constant terrorist threats. Some in the Brexit camp now want a “waiting period” or “time for reflection,” but that is the last thing the world needs.

This might sound unreasonable, but if we’re soft now with Britain, giving it too much wiggle room to extract favors and deals, we will only feed anti-European parties elsewhere in Europe and strengthen the belief of nationalists and populists that the E.U. is a walkover. The one person who benefits most from these anti-European movements is, terrifyingly, Russian President Vladimir Putin: who has used Russian money to fund European leaders including Farage and Marine Le Pen, the leader of France’s National Front

2. The U.K. must decide what relationship it desires to have with the E.U.

Does the U.K. want to have trade deal with the E.U.? Just like Canada just negotiated and the U.S. is considering. This would mean a mutual recognition of each others standards. Or would the U.K. want to take it a step further and become a part of the internal market, like other non-E.U. countries such as Iceland and Norway. After all, Britain and Europe remain geographical close and are major trading partners. There are goods and services to be sold on both sides of the English Channel. But re-entering Britain into the internal market would mean a complete acceptance of E.U. rules without having a seat around the table. Plus, a feisty membership fee that will have to be paid. This seems hard to sell for a British political class that vowed “to take our country back.”

3. The E.U. must move forward with a thorough reform of our outdated institutions and policies.

The British people were right to question the ability of the current E.U. to meet the challenges European countries face. For years in a row now, the E.U.’s 28 national leaders gather around the negotiating table, look each other in the eye and decide not to decide. Not only has the EU failed to clean up its banks—nine years after the outbreak of the financial crisis—and neglected to come up with decent plan to reboot our economy, but the E.U. is also paralyzed by a deep cultural unrest.

After the Cold War, Europeans believed it was the “end of history,” and we were in the role of victors. Today, we know this was a mirage. Europe is shaken, insecure. We don’t have the beginning of a strategy in Syria, let alone a consistent battle plan against ISIS at home or abroad. We don’t have a clue how to react to the dangerous whims of Putin, either. For all these mighty challenges, we look to America for solutions. While the humanitarian disaster in Syria, the dictatorship of Abdul Fattah Al-Sissi in Egypt, Putin’s invasion in Ukraine and his annexation of Crimea are hot issues. It’s high time we assume responsibility for them.

We should forge a strong European federation to replace the weak, incapacitated confederation of member states we have today. A Europe of 28—soon 27—member states can never be efficiently governed by unanimity. It means we move forward at the pace of the slowest member state and drag ourselves from standstill to standstill. It doesn’t have to be this way. Our own European Founding Fathers wrote as early as 1953 a federal constitution for Europe, inspired by the American political structure. They envisioned a Europe with a united defense force, a common foreign policy, a small but powerful European government and a full-fledged European treasury with own resources (instead of the current European budget of 1% of GDP funded by national contributions ).

Although the 70 representatives approved the federal constitution for Europe at the convention, it was torpedoed by the French National Assemblee a year later in 1954. This French “political accident” has held us back for decades. It is time to set the record straight and follow the American example of 1787 at the convention of Philadelphia and to make a federal giant leap.

That is the opportunity in this Brexit crisis. The possibility to forge an E.U. that is capable of solving crises instead of letting them fester. A union that is a more trustworthy ally of the U.S. than it is today. A union that can be a force for good in the world. Forward-looking not backward. Optimistic and self-assured.

Write to Guy Verhofstadt at GuyVerhofsradt. 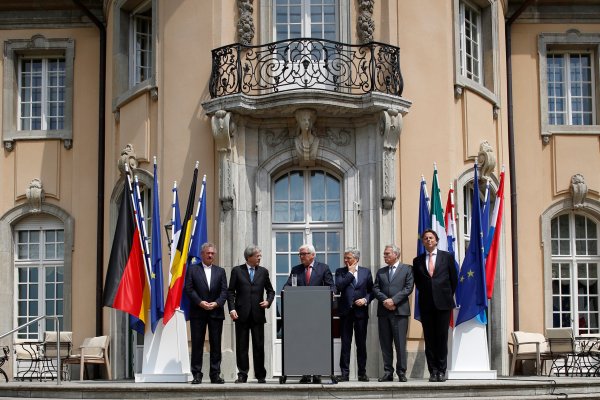 The E.U. Agrees It Must Reform to Save Itself. But How?
Next Up: Editor's Pick