The Man Who's Really in That Iconic Iwo Jima Photo

In this Feb 23, 1945 file photo, U.S. Marines of the 28th Regiment, 5th Division, raise the American flag atop Mt. Suribachi, Iwo Jima, Japan. Krelle's and Foley's research found that the man second from right is Franklin Sousley, not John Bradley. Sousley was originally thought to be the man second from the left, but that's Harold Schultz, Marines confirmed June 23.
AP
By Olivia B. Waxman

The Marine Corps announced Thursday that the late Private First Class Harold Schultz appears in the iconic World War II image of U.S. soldiers raising the American flag on Iwo Jima — and not John Bradley, the Navy hospital corpsman who became the subject of the bestseller Flags of our Fathers and a Clint Eastwood film adaptation.

The announcement supports claims by amateur historians Eric Krelle and Stephen Foley that the Marines had made mistakes in identifying the six men in the photo taken atop Mt. Suribachi on Feb. 23, 1945, by Associated Press photographer Joe Rosenthal, following one of the war’s most violent battles with Japanese forces. The research, first profiled by the Omaha World Herald in 2014, made headlines more than a month ago when the Marines confirmed having launched an investigation. That probe is now the subject of the Smithsonian Channel documentary Unknown Flag Raiser of Iwo Jima, which airs July 3.

In early May, just days after the probe was announced, Bradley’s son James, author of Flags of our Fathers, said he didn’t think his father was in the flag-raising in the iconic photo, but rather that his father participated in one earlier that day. Speaking by phone on Thursday, Krelle argues that the results of the Marine Corps’ inquiry may help people “understand why John Bradley was so quiet about the photo when he was questioned. Maybe he knew he wasn’t part of that actual event.”

However, Schultz kept his involvement in the photo mostly secret from his family. Speaking to TIME by phone, Dezreen MacDowell, 54, his stepdaughter and his only known remaining family member, said she never found out that he was in the photo until a few years before his death in 1995 at age 70. At that point, at a dinner, “he said, in passing, ‘I was one of the flag-raisers on Mt. Suribachi.’ I said, ‘My God, Harold, you were a hero.’ And he responded, ‘No, not really, I was a Marine.’ And then didn’t want to speak any more of it. He just felt like he was doing his duty to his country.”

What his family did know about Schultz’s life was that he grew up in Detroit and lied about his age to join the Marines on Dec. 23, 1943. After being injured on Iwo Jima on March 13, 1945, he received a Purple Heart. Back in the states about a year later, he got a job with the U.S. Postal Service in Los Angeles and sorted mail until he retired in 1981. Since marrying her mother Rita Reyes Schultz in his 60s, MacDowell remembers him as a man who liked going to horse races at Santa Anita and Del Mar, listening to big band Glenn Miller, and watching movies featuring actresses Hedy Lamarr and Maria Montez.

Reflecting on how he would have reacted to the Marine inquiry’s conclusion this week, she says Schultz would have been “more than a bit embarrassed” by the attention. “He never sought fame or glory.” 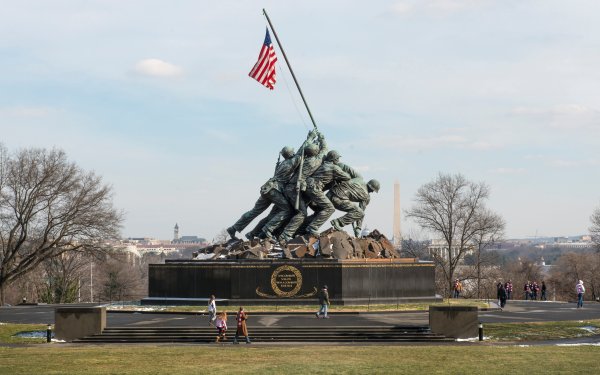 Marines Wrong About Man in Iwo Jima Photo
Next Up: Editor's Pick