Under U.K. rules, Brits who left their homeland at least 15 years ago did not have voting rights in the Brexit referendum, nor can they vote in other British elections. That rule runs counter to many other countries, including the U.S., whose citizens have lifetime voting rights, so long as they retain American nationality. And it has the some of the millions of Brits living abroad—who heavily favored the Remain side, but who had no right to vote on Thursday—very unhappy.

Read More: Brexit Shows a Global Desire to Throw the Bums Out

“It would made a difference. This is part of our inheritance and our society that we should have the right to choose the future of,” says Charlotte Oliver, a British lawyer in Rome, who moved there 15 years ago to be with her Italian boyfriend, with whom she now has two children, both British citizens. “I’m shocked and horrified.”

British expats in Europe brought a legal challenge in U.K. courts earlier this year to try win the right to vote in Thursday’s referendum. The E.U. Court of Human Rights had ruled that the regulation was a violation of European citizens’ rights. Prime Minister David Cameron said at the time that the government would review the rule, but not until after the referendum—a decision that might have proved fateful to the Remain side.

Read More: Here’s How Brexit Will Affect Your European Travel

Statistically, there is no certainty that long-term expats’ votes would would have swung the referendum in the opposite direction. Yet the arithmetic, and the widespread shock among expats in Europe on Friday, suggests that the results would have been far closer with them in it.

Of the five million British citizens living abroad, about 1.2 million of them live in the other 27 E.U. countries, most of those in Spain, Ireland and France, according to U.N.; it is not known how many of them have been abroad for more than 15 years. That 1.2 million figure is roughly the same as the 1.269 million more Brits who cast Leave votes over Remain votes on Thursday.

Read More: These Brexit Voters Think They Have Made a Horrible Mistake

On Friday, expats in Europe say they awoke with a sick feeling in their stomach—and a sense that all the decisions over their futures would now change significantly. There are countless practical considerations – over pensions, passports, health care and other issues—much of which is still unknown. British expats said an immediate worry was whether they would maintain the right to work in the other 27 E.U. countries, or whether they can continue to be able to move freely across the continent on non-E.U. British passports.

Keenly aware of those anxieties, Cameron in his speech on Friday morning said he wanted to “assure” Brits living in Europe “that there will be no immediate changes in your circumstances.”

The word “immediate” hardly sounded reassuring to British expats, however. Instead, they see inevitable problems ahead—especially as the details of any British departure are subject to negotiation with the other 27 E.U. countries, where there is considerable anger over Britain’s decision.

“We need to apply for French citizenship,” says Gavin Quinney, a British wine-grower in Bordeaux, who moved from London 16 years ago, with his wife. “Me and several thousand other people will be looking at doing that,” he said by phone, adding that since moving to France in 2000, and buying a 60-acre vineyard and chateau for around the same price as a “nice house in the suburbs of London,” the couple had raised four children to be bilingual and French-educated. Nonetheless, he says, they remained proud Brits, and he still hopes to keep his U.K. citizenship, but as a dual citizen with France. “I will be Googling ‘French immigration lawyer Bordeaux’ right after this phone call,” he says.

Like others, Quinney also believes the Brexit is “a game-changer” for his business, since much of the 200,000 bottles he produces a year are sold to the U.K., which imports French wines tariff-free, under the E.U.’s single market.

There are other unknowns, too—including the status of retired Brits, thousands of whom live in the sun-baked parts of mainland Europe. Some say they now fear their British pensions might drop in value against the Euro—and indeed, the value of the pound sterling has plummeted. “People are in difficulty anyway because they are trying to live on their pensions,” says Heather Tombs, who runs an expat consultancy in Dordogne, called France Made Easy, for the large British population there. “It is not easy, and it will be worse now.”

One such retired Brit is Maureen Webster, 66, who moved from Newcastle to France’s Vendée region in 2014, and now runs a bed-and-breakfast there. She worries that her grandchildren would no longer hop across the English Channel regularly to visit. “I don’t have the words to describe how devastated and appalled I feel,” she says. 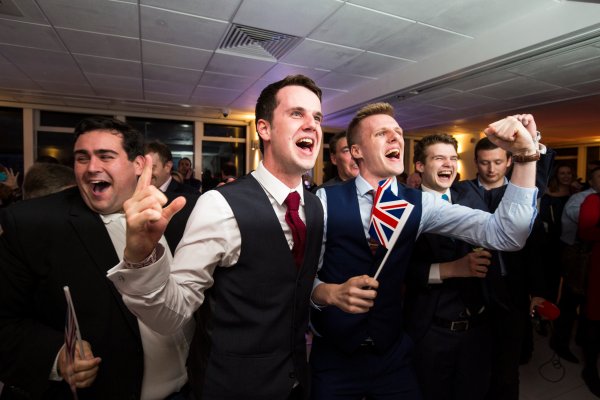 Why BREXIT Means Happy Lawyers
Next Up: Editor's Pick