Just How Bad Could Brexit Be for the U.S.? This Bad

Brexit could end up being far worse for the U.S. than many predicted.

Dow Jones industrial average futures were predicting that the gauge could open down nearly 650 points when stocks start trading on Friday, after the U.K. voted to leave the EU. The pro-Brexit vote could derail the British economy, and add uncertainty to markets. Some like George Soros predicted the pound would plunge if Britain were to vote to leave the EU. The pound did drop 10% overnight, though not as much as Soros predicted.

If stocks were to drop as much as predicted on Friday it would be the sixth worst daily point dive in Dow history. The five other worst days came during the 2008 financial crisis and the 2001 dot.com bust.

Percentage-wise—at a less than 4% drop—it wouldn’t rank in the top 15 worst days in Dow trading history.

The S&P 500 futures were predicting a bigger percentage drop in the market, showing that stocks on that gauge would be down nearly 5% on Friday.

The dive shows once again that U.S., and world markets are more prone to volatility than they have historically been. By the fundamentals, the U.K. leaving the EU shouldn’t have that much of an effect on the U.S. economy, even if it does send the pound plunging and Britain into a recession. Sales to the U.K. represent a very small part of the overall revenue of the largest companies in the U.S., slightly less than 3%. Yet, U.S. stock markets reacted violently to the news.

As Allianz CEO Oliver Baete told Fortune‘s editor Alan Murray earlier this week, ballooning financial derivatives have increased the amount of volatility in times like these. He said that there is a growing portion of Wall Street that makes money on volatility and, therefore, is determined to feed it.

The real problem with derivatives is that they can spread and amplify losses throughout the system—that’s particularly true if lots of hedge funds were making the same trade. And there is no doubt that many were positioned last night for a Bremain, not the Brexit we got.

So while there may not be huge economic losses from Brexit, there could be large market ones. It already looks that way. 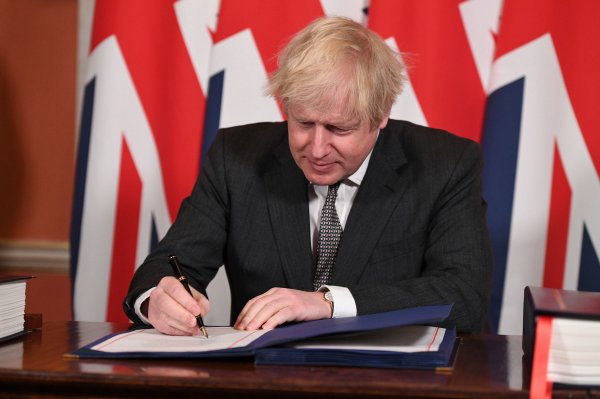 Britain Ends Brexit Journey With Economic Break From E.U.
Next Up: Editor's Pick