Meet the Woman Behind the Democratic Sit-In

Sitting on the plush blue carpet on the floor of the U.S. House of Representatives, Representative Katherine Clark remarked to Representative John Lewis, the civil rights icon who helped lead the Selma-Montgomery marches in 1965, that this sit-in must surely be “cushier” than his first.

Indeed, he replied gravely with a hint of a smile, it was.

It was through Clark’s actions that Lewis and dozens of other Democratic members found themselves sitting on the House floor protesting the GOP’s refusal to hold votes on two gun-control provisions in the wake of the deadliest mass shooting in U.S. history. But though this was her first sit-in, Clark is no stranger to civil disobedience.

Clark won her Massachusetts seat in December 2013 in a special election to replace Ed Markey, who was headed to the Senate. One of the first people she met coming to Congress was Lewis. “He came over and introduced himself and said to please call him ‘John,’ I was tongue-tied,” Clark told TIME in an interview. “I was so in awe that I got to serve with him and that his kindness and generosity extends to everyone — even the very very newest member of Congress.”

The two struck up a friendship and Clark would make a point to visit with Lewis whenever he came to her district, which wasn’t infrequently. Clark represents Harvard, Tufts and a host of other schools where Lewis was often invited to speak. Clark accompanied Lewis to Selma to mark the 50th anniversary of the march last year. And they would often chat during votes.

So it wasn’t unusual when last Thursday Clark approached Lewis during a vote on the House floor. Clark was frustrated. The House was set to hold yet another moment of silence for the victims of a mass murder perpetrated by a mad man wielding a gun. She wanted to do more.

“I wanted to do something to keep gun violence in the forefront of not only the American people but, more specifically, members of Congress and he suggested, in his words, that we do something dramatic, and he suggested having a sit-in, and it really went from there,” Clark recalled.

Clark worked for two years right out of law school in Chicago doing, in part, civil rights cases and she took part in an anti-KKK protest when she lived in Denver that turned into a riot. But this was her first experience engaging in civil disobedience on the floor of Congress. “When you have John Lewis, such an icon of the civil rights fight for justice, you know that good things are going to happen,” she said. Lewis has credited Clark for the sit-in.

Though the sit-in has ended — for now — Lewis said not to count them out. Lewis and Clark are not done pioneering a path for passage for those two gun-control measures, which would close a loophole in background check for gun purchases and ban those on the FBI’s terrorism watch list from purchasing weapons.

“Our goal is that when the House is in session and we have the possibility of bringing up that vote, that we are there being vocal about this issue, and that we keep this momentum going,” Clark said. “I think we have spoken loudly and I think the American people have answered.”

Given that 90% of Americans support the two provisions, Lewis and Clark are confident that, as the old political adage goes, where they are sitting, America stands. 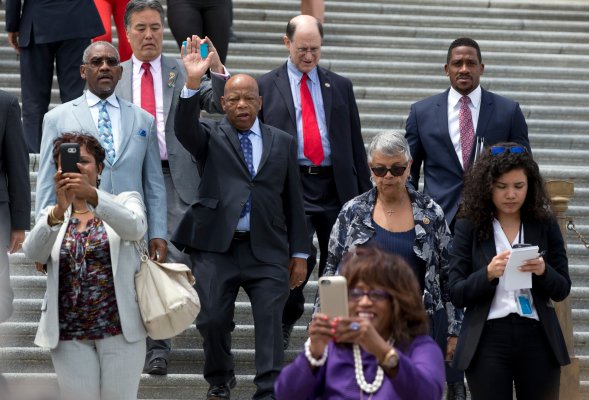