Watch Democratic Representatives Explain Why They Staged the Sit-in

Yesterday it was Periscope, and today Snapchat brought us to the front lines of the Democratic House sit-in pushing for a vote on gun control legislation.

Rep. Cheri Bustos, an Illinois Democrat, posted videos to her Snapchat of more than 40 Democratic Representatives telling their own reasons for sitting in on the floor of the House of Representatives. The Democrats ended the sit-in Thursday afternoon, though it’s not clear why — many in the video said they would not leave until they voted on gun control.

Since the Democrats were “shut down from a communications perspective,” Bustos tells TIME, she drew on her 17-year career as a newspaper reporter to conduct the interviews for her Snapchat Story.

“The microphones were turned off. There was an attempt to muffle what we were trying to share with the American public. Through technology, we were able to [share] what was going on on the House floor,” says Bustos. “I wanted to show the behind the scenes emotions that were attached with our sit-in.”

Bustos added that some of the reps she interviewed didn’t know what Snapchat was, and she would simply ask each member what they hoped to accomplish.

“Today is a day of history,” said Minority Leader Nancy Pelosi in the footage. “Members of Congress have been empowered and emboldened to speak out for gun safety.”

The Democrats all had reasons for fighting for gun control: some cited shootings in their own district, while others said they had enough of reasonable legislation being blocked by Republicans.

“[I’m] standing here to bring some action to the 30 moments of silence that we’ve had in Congress since I got elected,” said Rep. Grace Meng of New York.

Others seemed downright fed up: Rep. Peter DeFazio, for example asked, “Really? We can’t even vote on a bill to prohibit people on terrorist watch lists from buying guns? Really?”

A few interviewed were frustrated by their Republican counterparts who went home.

“We will not allow the Republican Party to shut down and not address this issue of gun violence,” said congresswoman Brenda Lawrence of Michigan.

Earlier Thursday, a spokesperson for Pelosi had told TIME the House Dems may stay on the floor for days. In the videos, some confirmed they didn’t intend to leave before reaching their goals. “What sprung out of emotion is now action taking place on the floor. No bill, no break,” said Rep. Joe Crowley of New York. “We’re staying ’til we get it done.”

Yet as House members surrounded Rep. John Lewis around 1 p.m. Thursday, he indicated the close of the sit-in, and said the efforts would instead continue next month.

“We must never, ever give up or give in,” Lewis said. “We must come back here on July 5th more determined than ever before.” 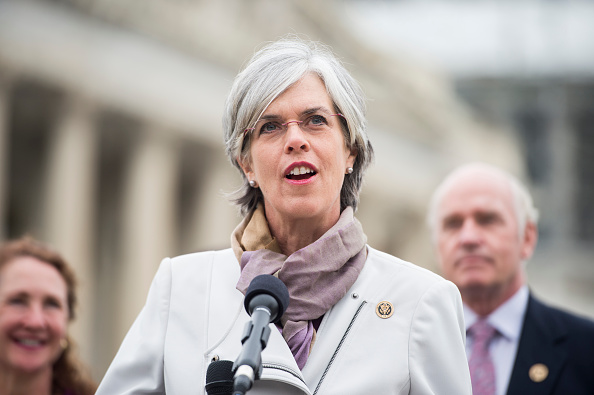 Meet the Woman Behind the Democratic Sit-In
Next Up: Editor's Pick