Baltimore Officer Acquitted on All Charges in Death of Freddie Gray

A Baltimore judge acquitted Officer Caesar Goodson on all counts Thursday in the death of Freddie Gray, who death in police custody last year sparked days of riots throughout the city.

Goodson, who drove the van that transported Gray after his arrest, faced the most serious charges of the six officers involved in his death last April. He was found not guilty on all seven counts, including second-degree depraved-heart murder, second-degree assault, misconduct in office and involuntary manslaughter. The depraved-heart murder charge carried a possible 30-year sentence.

In the trial, prosecutors argued that Goodson, as the van’s driver, intentionally tried to injure Gray as he drove him around Baltimore without a seat belt and gave what they said was a “rough ride.” They also said Goodson was aware that Gray was injured but he failed to provide aid or seek medical care for him.

Goodson’s defense said that Gray had actually injured himself in the back of the van and questioned the prosecution’s timeline of when Gray was injured.

Goodson, a 16-year veteran of the Baltimore Police Department, was the third of six officers to stand trial in Gray’s death. Officer William Porter’s trial ended in a hung jury and Edward Nero was found not guilty.

In preparation for the verdict, city officials put the Maryland National Guard on notice for potential violence. Last April, Baltimore experienced riots the like of which had not been seen in the city in half-a-century after Gray, a black Baltimore resident, died in policy custody a week after his arrest. Protesters set fire to businesses and looted drug stores, leading to the national guard coming in to restore order. More than 200 people were arrested. In May, Baltimore City State’s Attorney Marilyn Mosby announced sweeping criminal charges against six officers involved in Gray’s death, a move celebrated by Baltimore’s minority communities.

Mayor Stephanie Rawlings-Blake, who was criticized for her handling of the riots last year and decided against running for re-election, released a statement saying: “We once again ask the citizens to be patient and to allow the entire process to come to a conclusion.”

“This is a disappointing verdict,” said DeRay McKesson, a Black Lives Matter activist who ran unsuccessfully for mayor this year, according to the Baltimore Sun. “I look forward to the remaining trials. The verdict today is a reminder that the current laws, policies and practices protect police behavior at all costs.

The next trial, involving Lt. Brian Rice, will begin July 5. Rice, one of the officers who arrested Gray, faces charges including manslaughter and second-degree assault.

Most Popular on TIME
1
How Did Japan Beat Coronavirus Without Lockdowns or Testing?
2
Brazil Is Starting to Lose the Fight Against Coronavirus—and Its President Is Looking the Other Way
3
The Overlooked Black History of Memorial Day 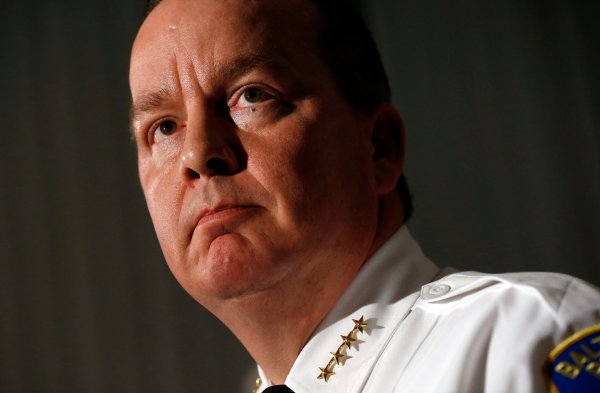