Using Watchlists for Gun Control Would Do More Harm Than Good

A salesman clears the chamber of an AR-15 at the "Ready Gunner" gun store in Provo, Utah on June 21, 2016.
George Frey—Reuters
Ideas
By Shirin Sinnar
Sinnar is an assistant professor of law and the John A. Wilson Distinguished Faculty Scholar at Stanford University.

In the wake of the Senate’s defeat of gun control legislation earlier this week, many Democrats are savoring the opportunity to bash Republicans for blocking efforts to deny guns to “suspected terrorists.” With polls showing that 90% of Americans favor such restrictions, the defeat is a propaganda coup: a chance to convince Americans that Republicans will obstruct gun control restrictions even when those restrictions appear to be no-brainers. Meanwhile Republicans, who for over a decade supported, or at best stood by during, the expansion of terrorist watchlists have now discovered that they have objections to the practice because it might curtail due process.

The odd politics of the moment—and the natural desire to do something in the wake of the mass shooting in Orlando—have obscured serious attention to the flaws of existing watchlists. Many Democrats do not want to acknowledge these flaws, because doing so would undercut the policies they are now promoting. Many Republicans acknowledge them only selectively, which makes it seem like they have little interest in protesting watchlists that unfairly bar people from flying, prevent them from becoming citizens, subject them to invasive questioning at U.S. borders or lead to false alerts on criminal rap sheets. Only when it comes to guns, it seems, does due process apply.

But existing watchlists are deeply flawed, and extending them to gun sales doesn’t make sense without reforming them. Watchlists have ballooned over the years. The master list, known as the Terrorist Screening Database, had 800,000 names on it by 2014. And the standard for putting people on the list has always been vague. It permits listing individuals suspected of any conduct “related to” terrorism, and is based on a “reasonable suspicion” standard that offers little check on reliability. A former DHS senior official offered this telling description of how the standard can be misapplied to just about any citizen without much actual intelligence at all to Jeffrey Kahn, author of Mrs. Shipley’s Ghost: The Right to Travel and Terrorist Watchlists:

Even the No Fly List, a purportedly more restrictive subset, may not be much better. A federal court noted in 2014 that “it is not difficult to imagine completely innocent conduct serving as the starting point for a string of subjective, speculative inferences that result in a person’s inclusion on the No Fly List.” In fact, individuals have alleged that government officials threatened to put them on the No Fly List to coerce them into becoming government informants, suggesting that the No Fly List may have strayed from its original purpose of averting true threats to aviation and become a broader tool to surveil and police individuals and communities.

All of this is exacerbated by the substantial difficulties in challenging one’s placement on the list. After a different federal judge found the procedures for contesting one’s status on the No Fly List to be constitutionally inadequate, the federal government improved its process for U.S. citizens denied boarding. It will now tell them if they remain on the No Fly List after they file a complaint. It also will provide some explanation as to why. But some who have gone through that process contend that they received too little information to enable them to rebut the accusations.

Moreover, the secrecy of these watchlists also means that the public often cannot get basic information about even the standards for being added. For instance, as I described in a recent essay in the Harvard Law Review, the government had long claimed that it required specific, individualized suspicion for adding people to the watchlist. But it took a federal court to reveal in 2014 that the government had adopted secret exceptions to that standard. One such exception, included within a secret document that was later leaked, allows the use of information “very limited or of suspect reliability” for non-citizens in immigration contexts. That same case also revealed that the plaintiff, a Malaysian doctoral student at Stanford, had been placed on the No Fly List based on a blatant mistake: an FBI agent had simply checked the wrong box on a form, an error that the federal judge described as the “bureaucratic analogy to a surgeon amputating the wrong digit.”

Senator Dianne Feinstein’s proposal for screening firearms purchases, which attracted widespread support among liberals, in fact replicates many of the existing flaws with watchlists. The proposal allows the Attorney General to block the sale of a firearm if he or she determines that a person presents a “threat to public safety based on a reasonable suspicion” that the person is, or has been, engaged in “conduct…related to terrorism.” Although that measure does not ban sales based on watchlist status alone, it gives sole discretion to the Attorney General to do so based on a similarly ill-defined standard. In fact, the predicate for suspicion referred to in the proposal largely tracks the existing standard for watchlisting, suggesting it would be a low bar.

In addition, her proposal to notify the Attorney General of attempted gun purchases by individuals who were subject to an FBI investigation within the past five years, even if they no longer are under investigation, could expose to scrutiny those whom FBI agents have concluded pose no risk at all. FBI investigations begin based on all kinds of allegations, many of which ultimately prove groundless. Existing policy allows the FBI, under certain circumstances (the specifics of which were redacted in the available Justice Department document I read), to keep people on the watchlist after closing an investigation if it believes they continue to meet the standard. It’s possible that the proposed provision will largely affect those whom FBI officials believe do not meet even the minimal standard for inclusion on the watchlist. They would subject people shown to be unsuspicious to fresh suspicion.

The desire to act on gun control measures after Orlando is natural and right, and some measures are worth seriously considering. For instance, a ban on military-style rifles could reduce access to weapons that do not belong on our streets at all. Denying any kind of firearm to those who present a serious threat of terrorism makes sense. In fact, the deprivation of a firearm generally burdens individuals far less than watchlists in other contexts, where one’s ability to travel for work or reunite with one’s loved ones may be on the line. But extending the use of existing terrorist watchlists—which anyone can fall prey to and few can escape—would be misguidedly trading a desire to feel secure for an injustice. 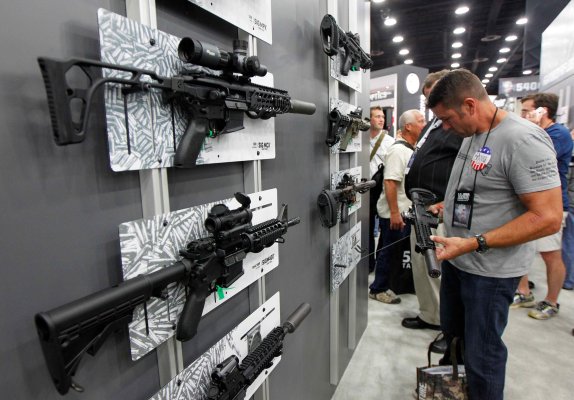 AR-15 Inventor's Family: This Was Meant to Be a Military Weapon
Next Up: Editor's Pick