4 New Things to Know About Darth Vader’s Role in Rogue One: A Star Wars Story

Details about the storyline and characters of the eagerly-anticipated Rogue One, the first spinoff movie in the Star Wars franchise, have been kept tightly under wraps. But we now finally have a few new facts to help us fill in the blanks before the movie hits theaters in December.

Yes, Darth Vader is definitely in this one

Eagle-eyed viewers were pretty sure they spotted Vader’s iconic cape billowing about in the first teaser trailer, and now Entertainment Weekly has confirmed it. Everybody’s favorite baddie will be voiced, as always, by 85-year-old James Earl Jones, giving us the signature rasp we know and love.

But he won’t get a ton of screentime

Vader may be a major figure in the plot and setup for Rogue One, but that doesn’t mean we’ll get to see much of him actually getting in on the action.

“He will be in the movie sparingly,” Lucasfilm president Kathleen Kennedy told EW. “But at a key, strategic moment, he’s going to loom large.”

He’s already a powerful rogue character in the Empire

“Within the Rebellion, it’s not commonly spoken about,” says director Gareth Edwards. “Within the Empire, there is the culture of knowing of the existence of Darth Vader. There’s definitely an underlying feeling that there is a power – a dark power – available to the Empire and that if you overstep your mark, you will suffer the consequences.” The movie takes place after the end of Revenge of the Sith, when Anakin Skywalker is badly burned in a fight with Obi-Wan — and dons the suit he will wear the rest of his life. In Rogue One, it seems he’s already gained a reputation as someone not to be messed with.

“He’s present in the military structure, but he’s not beholden to it. He’s not accountable to anybody, really, except Palpatine,” Lucasfilm’s chief of story development, Kiri Hart, told EW.

He’s not the only bad guy on the scene

In the teaser, we were introduced to a mysterious but menacing character in a white cape and military coat. That’s Director Orson Krennic, played by Ben Mendelsohn,”an ambitious Imperial officer with Machiavellian tendencies who is eager to secure a place at the Emperor’s side.” Krennic, who’s not very friendly with Vader — in fact, he’s straight-up threatened — will be looking to move closer to the Emperor while dealing with plenty of sabotage amongst the Empire’s own ranks. Any Rebels who get in his way, beware.

What about the good guys? Looks like we’ll have to keep waiting for further details on Rebel fighters Jyn Ursa and Saw Gerrera, played by Felicity Jones and Forest Whitaker. 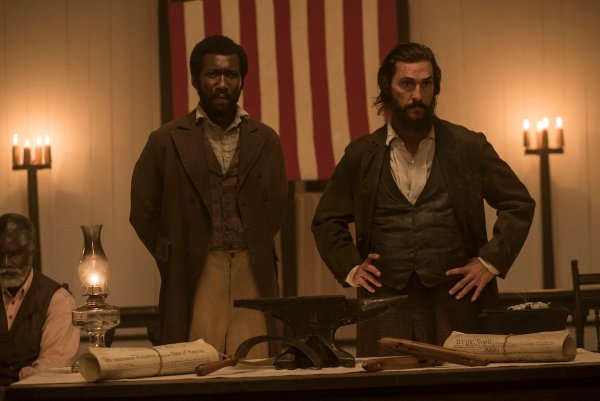 Why You Probably Hadn't Heard the Real 'Free State of Jones' Story Before
Next Up: Editor's Pick