By Sean Gregory and Julia Lull

Team USA heads to the Rio Games this summer with a chance to win something that would seem impossible for a bunch of Americans: an Olympic medal in rugby.

Their cause has been bolstered by the rise of 26-year-old Carlin Isles, a former football player and sprinter who, in just four years, has gone from rugby neophyte to potential Olympic phenomenon. A clip showing Isles dashing past some of the world’s best players, titled “Carlin Isles. Olympic Dream,” has nearly 7 million YouTube views. Rugby sevens — a faster game played with seven to a side, instead of the traditional (and more plodding) 15 — makes its Olympic debut in Rio.

“Carlin is one of the first global celebrities to come out of sevens,” says Brett Gosper, CEO of World Rugby, the sport’s global governing body. “He’s the face of America’s ambitions in the game.”

To read more about Isles, check out the July 4th issue of TIME, which subscribers can read here.

Write to Sean Gregory at sean.gregory@time.com and Julia Lull at julia.lull@time.com. 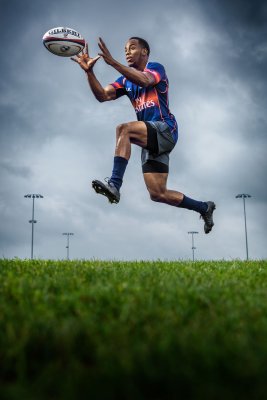