Meet the British Immigrants Who Want the U.K. Out of the E.U.

If you were searching for stereotypical Euroskeptics in London, the borough of Newham might not be where you would start. Home to Queens Market, and famed for its South Asian delicacies that range from exotic fruit to spices, the diverse East London borough has one of the fewest numbers of white people per capita in Britain.

But Vote Leave — the official campaign to leave the E.U. in Thursday’s referendum — has had “huge” success among the district’s first and second generation immigrant communities, according to Emily Knight, Vote Leave’s Volunteer Co-ordinator for the area.

“It is not… just white working-class people” who oppose the E.U, she says, standing outside a block of 1950s social housing in Newham’s former docklands. “Minority voters like Bangladeshis, Indians and Ghanians are getting angry about the European Union.”

On voting day, TIME joined Knight and her team of six Vote Leave volunteers in Newham where they were “knocking up” locals; urging known supporters who have not yet voted to go and cast ballots. One of the volunteers is Bishwajit Bal, a first generation immigrant from Bangladesh who moved to Newham and officially became a citizen four years ago.

The reason why he is voting Leave: too many European immigrants. Bal says Eastern European immigrants don’t appreciate what an extraordinary opportunity they’ve been given, unlike non-EU migrants. “We helped build this country and pay taxes, they don’t respect each other.”

Having voted for the far-right U.K. Independence Party in the 2015 general election, Bal believes the E.U.’s free movement rules, which has seen up to three million Europeans relocate to the U.K., have burdened Newham’s creaking public services. “I had to wait in the hospital for four hours before someone looked at my baby who got burned.”

Today’s team of six are distributing wads of leaflets still touting a map that suggests Iraq and Syria would soon share the same border with the E.U.— which Sadiq Khan derided as inflammatory and false in a referendum debate less than two days ago, as Turkey has no chance of joining the economic bloc any time soon. With a red Union Jack draped on his soldiers, Newham local Mahyar Tousi, 29, shoves the leaflets into letter boxes as he explains that he moved to the U.K. in the early ’90s after his mother gained asylum status.

Tousi says Europe’s open border policy has been “dangerous to refugees as well.” He believes Germany, which has taken in over 1 million asylum-seekers, has not provided adequate welfare to the new arrivals. “This is also not a fight between Europeans and non-Europeans,” he says, as he walks up to a terraced house. “This is an issue of control, where we want to have the ability to stop people with criminal records from coming in.”

As they knock on doors, the volunteers are approached by a 47-year-old man of Nigerian descent who identified himself only as Samuel. He asks whether Britain “can really stand by ourselves, the world needs to work together now.”

Tousi and Knight, who seemed skilled in their voluntary tradecraft having canvassed for Leave since January, explains the Leave position that the E.U. has yet to make trade deals with Africa, resulting in high tariff fees on products like coffee from the continent.

The conversation then drifts to immigration where a now enraged Samuel, who is a mental health nurse, says he feels like a “second-class citizen in my own country” because he is unable to bring in his wife and children to the U.K. This is because he does not earn above the required threshold needed to bring over a non-E.U. spouse or children.

The Vote Leave volunteers commiserate, suggesting that the E.U. migration policy is the cause. “I am going to vote leave,” says Samuel. “It is racist and ridiculous.” As Samuel walks away, Knight tells TIME that incidences like this happen all the time.

According to the British Election Study, two-thirds of Britain’s BAME (Black, Asian and minority ethnic) voters favor staying in the E.U. compared to white voters, who are evenly split between Brexit and Remain, reports the BBC.

However, many first-generation immigrants TIME spoke to on Thursday were on the side of the canvassers. Euder Menezes, who is an E.U. citizen from Italy and thus unable to vote in the referendum, says he would vote out due to what he perceives as the British government being unable to provide new homes.

A few doors down a shirtless Billy Simba, 41, who moved here with his wife from the Democratic Republic of Congo in 2000 and gained citizenship, says he is voting out for his children. “I am a father of two and I am voting out because… I can’t see a future for them,” he says. He is worried that more migration will cause house prices to raise even further, and cause his kids to miss out on jobs.

As it nears lunchtime, Knight says that the morning may have seemed successful but Vote Leave analysts have calculated that for them to win, 36% of the votes from Newham have to be to Leave. With a record number of 46.5 million voters having registered to take part in today’s referendum and polls showing a dead heat, nothing can be left for granted. 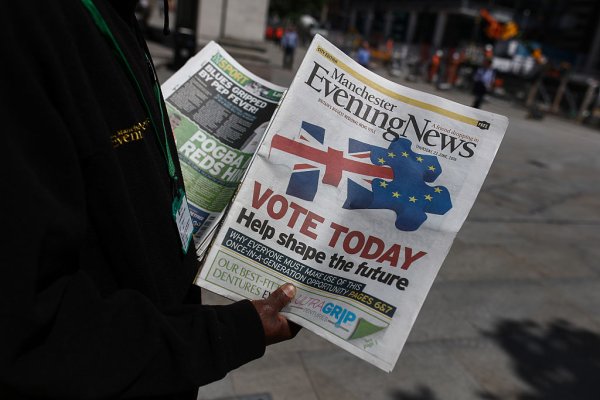