Review: HBO’s Any Given Wednesday Brings Out the Worst in Host Bill Simmons

It’s hard to believe, watching him in action from moment to moment, that Bill Simmons is the sort of figure who evokes strong emotions. Simmons, on the first episode of his new weekly talk show Any Given Wednesday, barely meets the camera’s gaze, and his delivery is stiff and halting; he seemed overmatched by the most basic aspects of TV talk. Watching him now, it’s surprising to recall that Simmons is one of the most powerful figures in TV sports coverage, after years at ESPN that included the founding of the sports and culture digital magazine Grantland, appearances on NBA coverage, and, ultimately, an acrimonious departure.

And yet it takes only a second of actually listening to Simmons to understand exactly why the subscription cable service brought him on. With only one episode of Any Given Wednesday under his belt, Bill Simmons has already figured out exactly how to maximally irritate. For a service that thrives on impassioned viewership, it’s hard not to imagine that Simmons’s ability to rankle is at least better than being boring.

Simmons’s skill has always been his ability to exist at the intersection of entertainment and sports (which is not so unique a gift as he thinks it is, as proven by the existence of the Sunday Night Football theme song and the “E” in “ESPN”). And yet his show merged the least insightful of both.

The show takes the form of a thirty-minute talk-show, with an opening monologue and two interviews bridged by a taped sketch. It wasn’t wildly unlike the early episodes of John Oliver’s Last Week Tonight, using various tools to look at topics in the news, but for its tone of arch disdain. In the monologue, delivered by an off-camera Simmons while a video montage unspools, the host says LeBron James is now “Bird 2.0 crossed with Magic 2.0 crossed with Bo crossed with Scottie crossed with Mailman crossed with ‘What the F—.'” Each individual player mentioned, from Larry Bird to Karl Malone, shows up onscreen, followed by “WTF” podcast host Marc Maron. Maron has nothing to do with anything, but is used here as a way to signal to those people interested in higher and artier pursuits that Simmons sees them, and that they aren’t really just listening to a list of unconnected famous NBA players from the past. Later in the monologue, the end-of-the-bar rambling is interrupted by an out-of-completely-nowhere jab at Macaulay Culkin and Lindsay Lohan, both former child stars whom Simmons describes as “total weirdos,” unlike the well-adjusted former teen athlete LeBron James. If this is what Simmons takes to be sophisticated insight about pop culture, he can keep it.

This is the part of the review where I note that, like anyone else who is a professional writer in 2016, I admire a great deal of what Grantland—now defunct after Simmons’s issues with owner ESPN became a media story—accomplished. I admire The Ringer, Simmons’s new site that merges sports coverage with a particularly joyous and peculiar sort of pop-culture fandom. Those sites, edited and written in large part by people not named Bill Simmons, treat culture and sports as jumping-off points for genuine fun and engagement.

By contrast, Any Given Wednesday‘s dark attitude makes sports and popular culture feel like a slog. A segment called “The Big Picture,” intended to answer the question “Is LeBron One of the Three Best Players Ever?,” could have been at least gabby fun, had guest Charles Barkley not made clear that he had five favorite basketball players, all from a different era of play, and would never, ever change that opinion. A more agile host would have pivoted to a question the guest was willing to consider answering. And a taped bit, used as a transition in the show, that joked about Steph Curry’s corny TV endorsements and put forward an idea for what his new ads could look like—just footage of him playing in the NBA—is a strangely mean-spirited bit of media criticism. But beyond its nihilistic point, it made little sense: Professional sports leagues are not often in the business of licensing their footage to TV commercials for unrelated projects.

It was the interview with Ben Affleck, though, that cast most sharply into relief Simmons’s weaknesses. This interview, an off-the-rails disaster of the sort that’ll be watched on YouTube for years to come, consists of Affleck and Simmons, both fans of Boston sports teams, egging each other on to the point where Affleck is screaming and cursing over the NFL’s treatment of the New England Patriots. It’s a strange, troubling performance that’s more worth watching than it is summarizing. And it rested on an unattractive sort of disdain, and the assumption that volume and willingness to be scorched-earth snide are equivalent to truth.

It was doubly strange for how much it had in common with Simmons’s bete noire ESPN—and how much worse it was. For all the contempt Simmons has for his former employer, he’s put together a loud, know-it-all show just like Pardon the Interruption, just less-informed and less pegged to the news. Of course, Simmons found room in his final segment, about how “there is no blueprint for winning in 2016,” to shade ESPN, commenting that their putting together a documentary mentioned as a potential Oscar winner was unexpected. The observation about 2016 is about as deep as when Kylie Jenner called this “the year of realizing stuff,” but why should ESPN’s having made something great come as a surprise? They, like, many other channels across the dial, have ambitions beyond cool-kid posturing. Simmons may have left their employ, but maybe someday his series, so consumed right now with showing you just how smart it is, might join them in actually creating something. 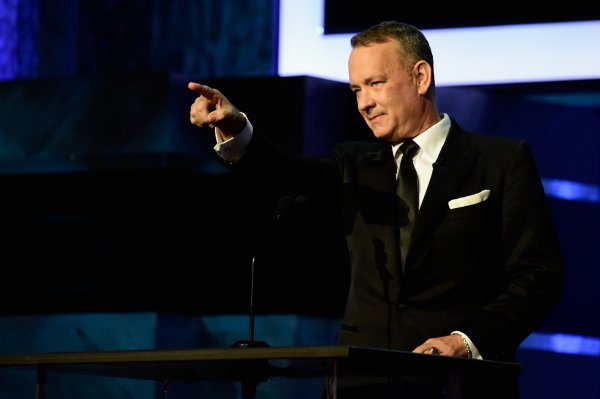 Tom Hanks Should Give Career Advice to Everyone
Next Up: Editor's Pick