For Mr. Robot, the Devil Is In the Details

For Mr. Robot, the devil is in the details
Erik Madigan Heck for TIME
By Eliana Dockterman

Rami Malek has taken a beating–or at least it certainly looks that way. It’s a sunny spring day in Brooklyn, and he’s on a break from shooting a scene for his show Mr. Robot that’s left him in impressively bad condition. He fiddles with the contact lens that creates the illusion of a streak of blood in one of his eerie, saucer-like eyes. A makeup artist touches up one of his lesions. Malek points to his bruised face. “He’s still battling demons,” he says of his character, a hacker named Elliot. “It hasn’t turned up roses in Season 2.”

The same can’t be said for USA’s Mr. Robot, returning July 13 after becoming last summer’s most surprising breakout hit. It’s a dark thriller about a coder (Malek) with a drug problem who’s recruited by a mysterious figure who calls himself Mr. Robot (Christian Slater) into joining a hacker group bent on taking down the 1%. The show won two Golden Globes–Best Drama and Best Supporting Actor (for Slater)–putting USA, a basic-cable network best known for sunny procedurals like Burn Notice, in the awards race.

Part of Mr. Robot’s appeal is that it looks like little else on television, from its diverse cast of characters–Malek is Egyptian-American, and the show’s hackers include a hijab-wearing Muslim woman and an Asian trans woman played by actor B.D. Wong–to its chilly cinematic style. The show even earned approval from Edward Snowden, who lauded its authenticity in an interview with Fusion.

That’s high praise for series creator Sam Esmail, who’s obsessed with accuracy, from shooting in real New York City neighborhoods–Chinatown, Queens, Coney Island–to using actual code onscreen. Esmail enlists experts in coding, politics and economics to consult on hacking and its ramifications. Spookily, Mr. Robot has predicted several real-life hacks before they happened, including the Ashley Madison data dump. That’s made the show popular with real hackers like the group Anonymous, though that comes with its own pitfalls: the cast members say they’ve nearly all been hacked.

It’s all close to home for Esmail, who was once suspended from college for a failed attempt at hacking himself; he went on to launch a tech start-up before becoming a writer and director. Mr. Robot was born in part from a frustration with the kitschy way Hollywood portrays the Internet, all binary digits and glowing tubes. “It always bothered me as a viewer when movies and shows gloss over the details,” Esmail says. So the beginning of the second season, which reckons with a financial collapse caused by the hackers, introduces an FBI agent hunting down the cybercriminals (Grace Gummer) and imagines the physical consequences of such an event. “Garbage would be piling up on the streets,” he says. “That would be one of the first cutbacks.”

“I’ve never experienced this level of preparation and attention to detail,” says Slater. “When we have a shot of [a QR code] that you can scan with your phone on the screen, I recommend everyone scan it because it will lead to some clue.” Those details, the actors say, help make the world more authentic, so they can better get in their characters’ heads. “When you see, from the top down, how much everyone cares, that makes an impact,” Malek says. “Sam gets performances out of me that no director ever has before.”

Esmail originally wrote Mr. Robot as a feature-length film, but the cinematic grandeur of the first season of True Detective convinced him that television was the right format. He already has four or five seasons plotted out: “The big reveal at the end of Season 1?” he says. “That was in the first 30 minutes of the movie version.” The show’s twists evoke Lost, one of Esmail’s favorite shows–though many fans believe Lost failed to stick its landing. “I’m past the point of worrying if people will be satisfied with the ending I’ve always had in mind,” says Esmail.

But where Mr. Robot’s story ends is beside the point. The show has tapped into universal anxieties about how our devices isolate us while making our darkest secrets vulnerable to skilled strangers. Are vigilantes like Elliot doing good or just generating chaos when they hack to reveal important truths? The answer may depend more on the viewer’s politics than the show’s. “It’s polarizing, politically,” says Malek, “which is not something TV really does.” 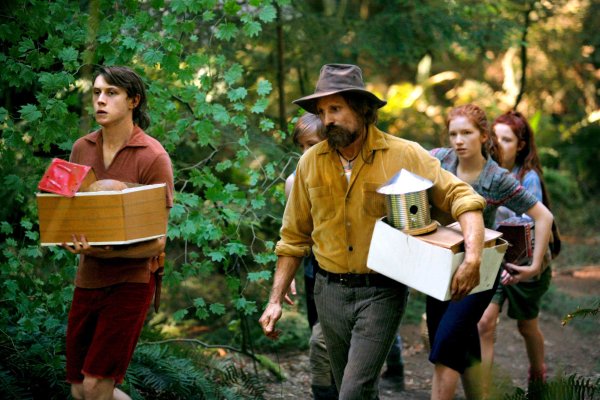