New Survey Brings Women Into the Action of Abstract Expressionism

In the late 1940s and early ’50s, when Abstract Expressionism first erupted, life wasn’t easy for those who adopted it as their practice. Red-baiting Congress members denounced it as a communist plot. Wary museums refused to show it. And just about nobody was buying it. But to be a woman working in AbEx–to use the shorthand term–required dealing with other kinds of marginalization, condescension and worse. Postwar abstraction became so identified with theatrical machismo–as the realm of hard-living, hard-drinking men like Jackson Pollock and Franz Kline–that you pretty much had to show your testicles at the door. Some galleries refused to represent women. Press coverage tended to employ terms like lady artist, making it sound as if painters as vital as Joan Mitchell and Grace Hartigan were embroidering doilies. Even when Pollock’s formidable wife Lee Krasner produced a canvas that deeply impressed her teacher, the fabled painter Hans Hofmann, his highest compliment was an insult: “This is so good, you would not know it was done by a woman.” Ouch.

Some of those women were eventually recognized as among the most important American painters of their time–and others might be due for a second look. These are the takeaways of “Women of Abstract Expressionism,” an indispensable show at the Denver Art Museum (DAM), where it will remain through Sept. 25, before traveling to Charlotte, N.C., and Palm Springs, Calif. Organized by DAM curator Gwen Chanzit, it mixes the works of six women with a secure place in art history–Krasner, Mitchell, Hartigan, Elaine de Kooning, Helen Frankenthaler and Jay DeFeo–with six who are less familiar: Mary Abbott, Perle Fine, Sonia Gechtoff, Judith Godwin, Deborah Remington and Ethel Schwabacher. Each found her own path into the AbEx idiom of shallow space, expressive paint handling and abstract imagery on (mostly) large canvases, in works that typically combined deliberate brushwork with risk, accident and improvisation. Once they got there, all of them knew what to do with the business end of a paintbrush.

Take Mitchell as a luscious example. It’s impossible to resist the virtuosity of her brushwork and the acute conjunctions of her palette in a picture like Hudson River Day Line, from 1955, a canvas in which she wields white like a broadsword, then counteracts it with fine filaments of cobalt blue and yellow. And if some of her pictures ended up congested or unresolved, which they did–well, that happened to Pollock too.

Even the very terms in which AbEx was formulated put women at a disadvantage. The influential critic Harold Rosenberg famously preferred to call AbEx “action painting,” with the canvas as an “arena in which to act.” It wasn’t long before an Abstract Expressionist painting was no longer thought of as a mere picture but as the visible residue of a titanic throwdown between the artist and the cosmos. By those hyperbolic standards, it was easy to dismiss women for producing work that was too “delicate,” a description that rarely holds when you look at their work.

There’s nothing dainty about DeFeo’s canvases, some built from magma flows of thick gray pigment with cinder-block density. Then there’s Krasner’s rhapsodic panorama The Seasons, from 1957, which summons the vegetal succulence of nature in forms that are nothing less than explosive and muscular. And when she hurled the mighty thunderbolt of Bullfight in 1959, Elaine de Kooning was not only making a taut and forceful painting, she was announcing her readiness to enter the same ring as Goya, Picasso and Hemingway. Which she did. Olé to that. 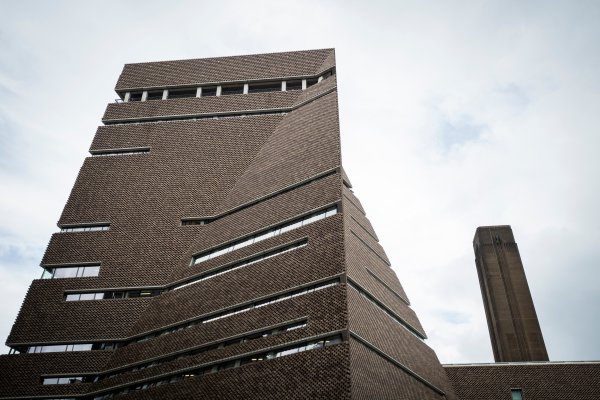 The New Tate Modern Museum Wing Makes Room for Art by Women
Next Up: Editor's Pick