Jokowi, as the President is popularly known, went to the Natunas along with Pramono, his Chief Security Minister, Foreign Minister, Fisheries Minister, military chief and others.

Indonesia says its navy warship KRI Imam Bonjol — named after a national hero who fought a religiously inspired war against the Dutch — fired a warning shot after spotting Chinese trawlers suspected of fishing illegally in Natuna waters last Friday, and that there were no injuries. China says the Indonesian navy shot at its fishing boats and injured one person.

The Indonesian warship ended up detaining one Chinese fishing vessel and seven people on board — Jokowi is set to inspect the seized boat Thursday. It was the third, and latest, sea confrontation between the two nations. Two previous skirmishes occurred on March 19 and May 27 off the same islands.

Read: What a Retracted Statement Says About China’s Growing Power in the South China Sea

Pramono tweeted photos of Jokowi at the Natuna, and a picture of the President’s handwritten note in the warship’s guest book, which read: “Guard … defend the Unitary State of the Republic of Indonesia.”

In its statement on Sunday, the Chinese Foreign Ministry referred to the Natuna waters not only as “Chinese fishermen’s fishing grounds,” as it has done in the past, but for the first time, it said the area was “where China and Indonesia have overlapping claims for maritime rights and interests.”

“China is in dispute with the Philippines, with Vietnam, with Malaysia and Brunei … it seems that China might be trying to drag Indonesia into this dispute,” said senior diplomat and international-maritime-law expert Hasjim Djalal, who was appointed by Jakarta this week to lead a special team to study how to stop China’s illegal fishing. “We don’t want that.”

Although Jakarta has objected to Beijing’s “nine-dash line,” which demarcates parts of the waters off Natuna waters as Chinese, Indonesia is not a claimant in the broader maritime dispute in the South China Seas that has pitted China against other Southeast Asian countries.

Jokowi faces a growing call to abandon Indonesia’s neutral stance in the conflict. “Beijing’s puncturing of our maritime governance space around the Natuna Islands in recent years reveals the limits of Jakarta’s ‘non-claimant’ position in the South China Sea,” wrote Evan Laksmana, researcher at the Jakarta-based Centre for Strategic and International Studies. 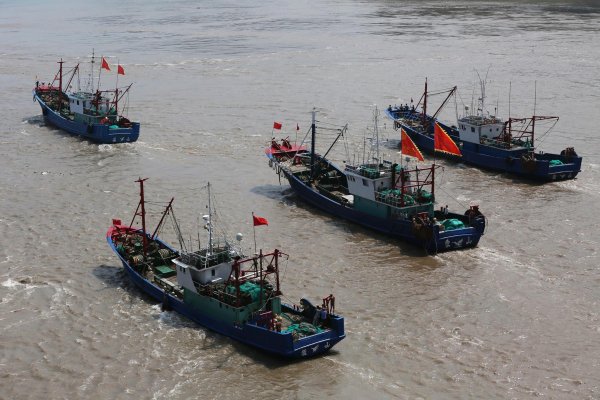 Indonesia Fires at Chinese Boats in Fishing Dispute
Next Up: Editor's Pick