Sheryl Sandberg Explains Why Young Women Should Mentor Each Other

Lean In just keeps leaning in.

The message has made several ambitious leaps since Facebook COO Sheryl Sandberg first urged women to double down on their careers in her 2013 bestseller. In 2014, Sandberg expanded her message to explicitly address issues faced by recent grads and women of color in her follow-up, Lean In for Graduates. Earlier this year, on her first Mother’s Day after the death of her husband, Sandberg acknowledged on Facebook that the original Lean In relied too heavily on the assumption that all women have partners, and that she hadn’t fully understood the massive structural barriers facing single moms until she became one herself.

Now, Lean In is taking another step forward, urging young women to rely on each other for mentorship as much as they would rely on senior-level managers. It’s not an entirely new idea in the Lean In universe, and Sandberg has long encouraged women to support one another at work. But in a new PSA, Kerry Washington, Serena Williams, and Megyn Kelly join Sandberg in urging young women to make Leaning In a communal act, not an individual one.

In her Mother’s Day post earlier this year, Sandberg emphasized the broader social problems that need to be addressed if women (especially single moms) are ever going to be able to participate equally in the workplace. It was an olive branch to those who critiqued Lean In for focusing too much on personal agency and too little on structural barriers. In the new campaign, Sandberg attempts to fuse the two together, casting collective ambition as the fuel of social transformation.

“People like to trade one off against each other, but you’re actually working on both,” she said in an exclusive interview with TIME. “When we interrupt the interrupter and get more women to the table and get more women’s voices heard, we are both working on the individual problem and the structural problem. Every time we get a woman into a senior job, we know we are more likely to get better policies.” Paid family leave for both parents, she says, is the single most important workplace policy that would help more women succeed. Facebook offers four months of paid family leave to both moms and dads.

The new initiative, she says, is all about finding ways to “help women help other women,.” They’ve put together some tips to help guide peer mentors: “How do you interrupt the interrupter, how do you make sure women get credit, how do you help girls to raise their voices, both in the classroom and at home with their friends?” she says. The tips for mentoring other women are available on LinkedIn, and include strategies like interrupting men who interrupt women (by saying something like “Hey, I’d like to hear what Kelly has to say”), actively celebrating other women’s accomplishments, and being a role model for young girls. Many of them aren’t terribly new— challenging the “likability penalty,” for example, is has been debated for years and was discussed in the original Lean In.

If anything, the broader messaging shift may be more more revolutionary than any of the individual suggestions: Sandberg is trying to transform individual ambition into a sense of collective achievement. Leaning In now means advocating for the women around you as much as you would advocate for yourself.

It’s also a clever solution to a practical problem. “There aren’t enough senior women to go around to mentor all the young women,” Sandberg says, adding that she also encourages senior men to mentor young women. But younger women, she says, can fill in the gaps. Sandberg says her own peers helped her at “very important inflection points” in her own career. “My mentors didn’t really understand what Google was or why I would go to Facebook,” she says. “My peers thought Google and Facebook were fabulous ideas.”

But if you take out the management experience, what’s the difference between a friend and a mentor? “Friendship is where you trust someone and confide in them and they can be there for the ups and downs of your life,” she explains. “Mentorship is when you give advice and support and encouragement to go after something that you want to go after.”

More importantly, Sandberg says, encouraging peer mentorship forms early habits, so that when this generation of young women reach senior management levels, they’ll help the next generation up the ladder. “As women see that they’re effective in mentoring each other, as those women move up in their careers and get older, they start mentoring younger women,” she says.

And that, she says, is good for everyone. “When women celebrate each other’s accomplishments, they’re seen as more professional and accomplished as well,” she says. “So supporting other women helps each other, helps women as a group, and also helps the woman that does it.” 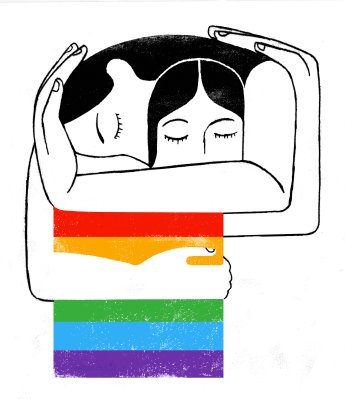 My Daughter Came Out, Then Orlando Happened
Next Up: Editor's Pick