Pentagon’s Mum on Blood and Treasure

One might be inclined to cut the Pentagon a little slack when it comes to its secrets if the past 15 years of war hadn’t turned into such a waste of those precious things: nearly 7,000 lives and probably at least $5 trillion by the time the last living vet of fighting in Afghanistan or Iraq collects her final disability check from the VA.

On the blood front, the Pentagon is declining to confirm unofficial reports that four U.S. troops were wounded in Syria on June 9. And on the treasure front, the Air Force is refusing to tell taxpayers the value of its contract to develop its new fleet of B-21 bombers.

Both denials, Pentagon officials say, are designed to keep intelligence out of the hands of potential enemies.

“We do not want to give them any better picture of the battle space,” Pentagon spokesman Peter Cook told reporters Tuesday when he declined to confirm the Syrian casualties. “This is information that we think the enemy could use to its advantage.”

It also minimizes news coverage of the growing U.S. military presence in both Iraq and Syria. While the nearly 5,000 American troops there are supposed to be only advising and training local fighters, three have been killed by enemy fire.

While Cook said his tight-lippedness didn’t represent a change in policy, the Pentagon has released such information in the past. Last month, for example, the Defense Department acknowledged the wounding of a pair of U.S. troops. It said one had been hurt near Erbil, Iraq, and a second north of Raqqa, the city in north-central Syria that serves as the seat of ISIS’s self-declared caliphate. More than 50,000 U.S. troops have been wounded in the wars in Afghanistan and Iraq.

The Air Force won't say how much it's paying [f500link]Northrop Grumman[/f500link] to develop its new bomber.
Getty Images

The Air Force says revealing how much it is paying Northrop Grumman to develop the new bomber would be “too insightful for the adversaries to get a sense of what they can do,” Air Force procurement official Randall Walden said Tuesday. Taxpayers don’t need that information, he said, and both its pilots and those taxpayers are better off if the cost remains classified.

“I don’t think it helps, certainly, the war fighter, because all we’re doing is, we’re putting them at risk,” he added. “And we’re showing our hand of what we believe this nation, in this case Northrop, can deliver this particular weapons system for.”

In April, Walden, director of the Air Force’s Rapid Capabilities Office, told the Senate that revealing the value of the winning bomber bid would make it “decisively easier” for foes to deduce its range and payload.

Tracking the bomber’s ultimate cost has become a bit of a parlor game in certain Washington circles. Its development is expected to cost $23.5 billion, and the planned 100-plane buy will cost $55 billion more. All that depends on a smooth development program and that huge 100-plane buy. The last time the Air Force bought a bomber, it planned on 132 of them—but got only 21. That drove the cost of each B-2 from an early estimate of $450 million a copy to a final cost of $2.1 billion.

“I know of no other program where the budget is unclassified, but the contract award value is not disclosed,” writes Senator John McCain, the Arizona Republican who chairs the armed services committee, and a former military pilot himself. “There is simply no excuse for this unprecedented concealment of information about how American taxpayer dollars are being spent.”

The incoming Air Force chief of staff, General David Goldfein, told McCain at Goldfein’s confirming hearing last Thursday that his service needs to be more open about the bomber’s cost.

“If we’re not transparent with the American people on the cost of this weapons system, through its elected leadership, then we have a good chance of losing this program,” he said. 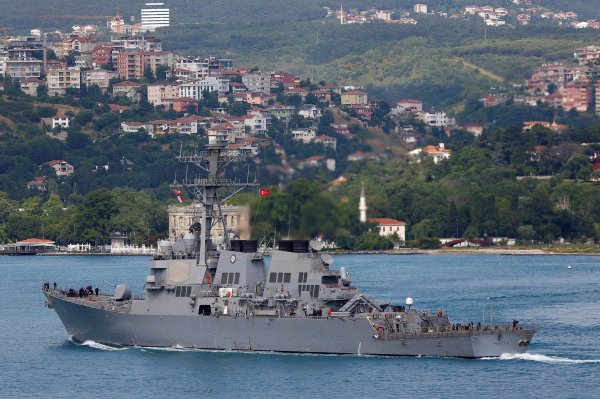 U.S. Will Patrol the Black Sea Despite Russian Warnings
Next Up: Editor's Pick