Democrats have staged a sit-in on the floor of the U.S. House to draw attention to gun legislation, a move they have called “unprecedented.”

The sit-in lasted throughout Wednesday afternoon and into the evening, coming a week after Democrats in the Senate led a filibuster to push for votes on gun control legislation in the wake of the shooting at a nightclub in Orlando. House Democrats are demanding a vote on a bill that would prevent people on the terrorist watch list from purchasing guns, also known as the “no fly, no buy” bill. Four votes Monday evening on gun control bills, including two Senate versions of that House bill, failed to pass the Senate.

Rep. John Yarmuth, of Kentucky, announced the sit-in Wednesday morning on Twitter around 11:30 a.m. Calling from the Capitol, he told TIME Democrats would remain on the floor of the House until Republicans allow a vote on “commonsense gun legislation.” Multiple Democrats have called for Republican House Speaker Paul Ryan to come into the House chamber.

In an interview with CNN on Wednesday night, Ryan called the sit-in a “publicity stunt” and pointed out that the Senate already voted down similar proposed legislation on gun reform this week.

“This is nothing more than a publicity stunt,” Ryan said. “This isn’t trying to come up with a solution to a problem, this is trying to get attention.”

Rep. John Lewis, a Georgia Democrat and a civil rights leader, Rep. John Clyburn, the number three Democrat in the House, and dozens of other Democrats have joined the sit-in. Democrats made themselves comfortable and chanted “No Bill, No Break!” Some Democrats said they should not leave the House floor as they may not be allowed to return.

“We’re going to hold out for a vote,” said Rep. Jim Langevin of Rhode Island. “The thoughts and prayers mantra that we’ve been saying every time one of these tragedies happens is not enough anymore. Enough is enough.”

Ryan shut off the live feed of the floor, preventing people outside the Capitol from watching the sit-in. Members of the House cannot speak for an unlimited period of time without yielding the floor, unlike in the Senate, where filibusters are the product of unlimited debate. Because of this, Yarmuth said disrupting the House is the only way to force a vote on gun control legislation.

Some representatives were not comfortable with walking out on a moment of silence the House held last week for victims of the Orlando shooting. “This (sit-in) was a way all members could feel comfortable in expressing their passion for at least getting a vote on the measure,” Yarmuth told TIME.

Democrats used various hashtags, like #NoBillNoBreak, #goodtrouble and #holdthefloor, on social media to rally support for their cause. Last week, thousands of tweets used #Enough to support the Senate filibuster.

You can watch the sit-in live here. 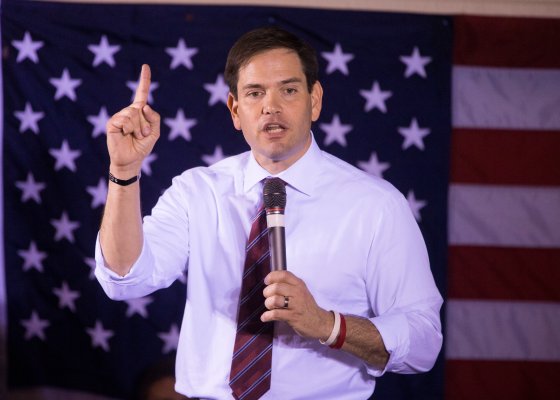 Rubio Will Run for Senate Again
Next Up: Editor's Pick