Now You Know: Why Are There Two Dakotas?

The Dakota Territory was formed in 1861—including what we now think of as North Dakota and South Dakota, as well as parts of Wyoming and Montana—and took on the boundaries of the two Dakotas in 1868. It was entirely expected that such territories would eventually join the U.S. as states after meeting certain requirements, like hitting a population count of more than 60,000 and drafting a state constitution.

So why did the two halves of the territory reach statehood separately?

Steven Bucklin, a professor of history at the University of South Dakota, points to regional differences in trade routes and population size as the two main factors. Those differences, with the addition of some territorial government politics, meant the populations felt some resentment for each other. Or, as Kimberly Porter, a history professor at the University of North Dakota, puts it, “the south half did not like the north half.”

(While we’re going to focus on why there are two Dakotas, it’s worth noting that they’re not the only states to share a name—the Carolinas separated in the first half of the 18th century, and West Virginia split from Virginia during the civil war because delegates from the western part of the state opposed secession.)

In terms of population size, the two parts of the territory were different from the beginning. There were always more people in the southern part of Dakota territory, which grew from about 10,000 in 1870 to about over 98,000 in 1880. By that point, according to the U.S. census, northern Dakota was home to only about 37,000 people. That meant that southern Dakota had the population necessary to join as a state, all on its own, years before the northern part of the state did.

Perhaps not coincidentally, there was also a bit of a personality difference between the two regions: the south thought the north was a bit disreputable, Porter says, “too much controlled by the wild folks, cattle ranchers, fur traders” and too frequently the site of conflict with the indigenous population.

Meanwhile, a year after the Dakota territory was formed, the Homestead Act passed. This new law encouraged settlement in the West, as did railroads that connected new farmers to markets for their crops. But the trade routes supported by these railroads connected North and South Dakota to different commercial hubs, says Bucklin. The northern part of Dakota territory became more closely tied to Minneapolis-St. Paul, via Fargo and Bismarck. In contrast, the southern counties along the Missouri and Big Sioux rivers were more closely tied by trade to Sioux City, and from there to Omaha or over to Chicago. These diverging economic ties left residents of different parts of the territory less connected to each other.

In terms of politics, the way the territory system was set up, legislators were appointed by the federal government in Washington, D.C., and tended to remain in the region only while they served their terms. The larger population of the southern region began to resent those “carpetbaggers,” Bucklin says, but the northerners tended to emphasize that it was cheaper to be a territory, with the feds funding a wide range of state functions. It didn’t help that the state legislators were sometimes notoriously corrupt—like Nehemiah Ordway, who moved the capital in 1883. “He essentially helped steal the state territorial capital from Yankton, now in South Dakota, to Bismarck, now in North Dakota” says Porter. The capital grab, which moved the capital even farther from the majority of the population, only fueled more resentment from the south.

By that point, South Dakotans had the necessary population for statehood and quickly moved to become an independent state. However, many attempts to form an independent state failed, Porter says, as the federal response was “either do it as one very large state, Dakota, or wait until you have enough people on both sides to be two separate states.”

That second option would play out before the decade was over. But why did they both choose to keep the name “Dakota”?

South Dakota wanted to be called simply “Dakota” Porter says, and “then the northern half would become either the territory of Pembina, which is a community right on the Canadian border, or else they thought we could be called the territory and ultimately state of Lincoln, as in the president.” But Porter says Dakota had already become a trademark of sorts—a source of quality products, “like California raisins or Florida orange juice”—and neither side wanted to give it up.

On Nov. 2, 1889 President Benjamin Harrison signed the papers to admit North and South Dakota as two separate states, along with Montana and Washington. Though North Dakota is generally considered the 39th state to South Dakota’s 40th state, it’s actually unclear which one was admitted first says Bucklin: “apparently President Harrison shuffled the paperwork first,” and signed the documents blindly. 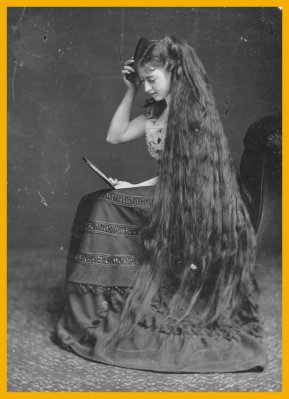 Now You Know: How Did Long Hair Become a Thing for Women?
Next Up: Editor's Pick