By Will Drabold and Julissa Higgins

It’s hard to tell if Donald Trump’s fundraising woes worry Republican senators: As with other questions about the presumptive GOP nominee, they don’t want to talk.

While senators spoke about gun control and other legislation Tuesday, they repeatedly dodged questions about Trump’s fundraising, which was a paltry $3 million in May, compared to rival Hillary Clinton’s $26 million.

But nine GOP Senators that TIME spoke to had different ways of avoiding the question. Here’s a look.

After talking on the Senate floor about the Arkansan of the week, Tom Cotton was asked by TIME if he would consider being Trump’s vice presidential nominee.

“You guys are like Lloyd from Dumb and Dumber,” the Arkansas Republican responded.

When asked about Trump’s lackluster fundraising, he repeatedly said “no comment” before jumping on an elevator.

Florida Sen. Marco Rubio took an underground train from his office to the Capitol Tuesday morning. When asked by TIME if Trump’s fundraising failures will affect Republican candidates, he pleaded ignorance.

“I haven’t seen the numbers,” said Rubio, who ran against Trump in the Republican primary. “I saw a headline somewhere that said he didn’t have a lot of money.”

Kelly Ayotte, a senator from New Hampshire facing a reelection fight this fall, also told TIME she had not seen Trump’s fundraising totals as of Tuesday morning. “I mean, you’ll have to ask their campaigns about it,” Ayotte said.

Moving briskly out of an afternoon meeting of Republican senators, Texas Sen. Ted Cruz had a repeated response to TIME’s questions about Trump: “Call the press office.” Keeping his head down while he walked, he said this three times before finally telling a TIME reporter, “You’re persistent, I’ll give you that.”

Cruz then ducked into an elevator.

After the meeting of GOP senators, Wyoming Sen. John Barrasso diverted questions about Trump to what he sees as the strengths of his candidates.

“We’re working with each of the candidates to make sure they’re fully funded to get their message out at home,” said the fourth-highest ranking Republican in the Senate.

When asked whether he had concerns about Trump’s low fundraising on Tuesday, Senate Majority Leader Mitch McConnell moved quickly on to the next question.

Ohio Sen. Rob Portman also declined to comment to reporters as he headed to lunch in the Senate. “No comment,” Portman said.

When caught in the hallway after the meeting of senators, South Carolina Sen. Tim Scott did not show any willingness to comment on Trump. He snuck into an elevator, quickly giving some final comments before he did so.

Also leaving the meeting early, Arizona Sen. John McCain said, “I always respect everybody’s views and they’re entitled to them” when TIME asked him about criticism of Trump. Then, the former Republican presidential nominee shut down.

“I am no longer talking about Trump,” he said. “I’m in a Trump-free zone.”

McCain added that Trump’s failures to raise on the national level will not affect his ability to raise money for his reelection campaign this fall. “I’m doing my own campaigning, my own fundraising,” McCain said, with notable frustration, before moving into a waiting elevator. “What would you expect?” 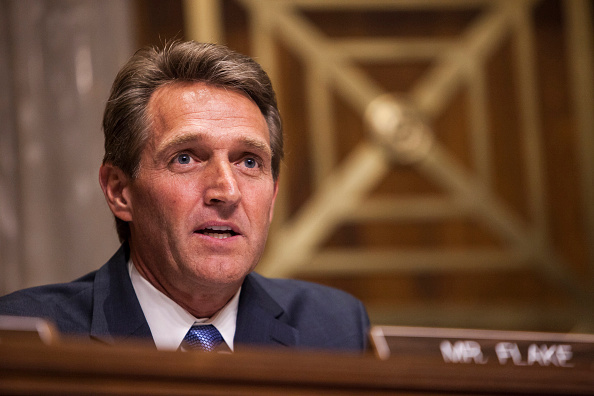 This Republican Senator Would Still Like to Block Trump at the Convention
Next Up: Editor's Pick