What to Know About the U.K.'s Vote on Leaving the European Union

By Julia Zorthian and Conal Urquhart

What is happening on Thursday

Citizens of the United Kingdom of Great Britain and Northern Ireland will vote Thursday on the U.K.’s membership of the European Union. Economists, politicians and people from all over the world forecast that a vote for Britain to leave the E.U., known as ‘Brexit’ would be catastrophic for Britain and could create economic and political shockwaves that could crash through Europe and onto the U.S. and the rest of the world. Yet, voters of the U.K. seem almost evenly divided and many are anxiously waiting for the early hours of Friday morning when the result will become clear.

What is the European Union and how did the U.K. become a member

After the end of the Second World War in 1945, Britain refused to join the new institutions set up by other European countries to foster greater co-operation and peaceful relations. Britain preferred to focus its trade and investment on its former colonies such as the United States, India, Canada and Australia. By the 1960s, however, Britain decided that it would be better to join what became the European Economic Community—the forerunner of the E.U.—in 1957.

The difficulty was that some European countries, France in particular, did not want Britain to join. In 1961, Britain’s application to join the EEC was rejected. The president of France, General Charles de Gaulle, feared that Britain would act as a Trojan horse for U.S. influence.

After de Gaulle retired, Britain re-applied in 1967 and finally became a member of the EEC, a free-trade zone in 1973.

Why do some Britons want to leave

Sovereignty: Many believe that the scope of the E.U.’s powers is so great that it impinges on the sovereignty of the U.K.

Regulation: Others are particularly annoyed by regulations set in Brussels, where the E.U. is headquartered, which they believe prevent businesses from operating efficiently.

Migration: But the biggest issue is migration. One of the key tenets of the E.U. is the free movement of people. This means that Britons can work and live in any part of the E.U. and E.U. citizens can live and work in the U.K. Around 3 million citizens of other E.U. states live in the U.K. while 1.2 million Britons live elsewhere in the E.U. Some Britons blame migrants for unemployment, low wages, and deterioration of the education and health systems. Some have even blamed migrants for traffic jams.

Why do Britons want to stay

Peace: Europe was devastated by two wars in the 20th century and the belligerents are now allies within the E.U.

Free trade: The E.U. is the biggest trading bloc in the world and the U.K. has tariff-free access to it. This would be jeopardised by leaving the E.U.

Investment: International investors have chosen the U.K. as their base because it is part of the E.U. Departure would lead many companies to re-consider their location.

What would change if the U.K. left the E.U.?

No states have ever left the E.U. before, so this is uncharted territory. If the U.K. votes to withdraw, its leadership would have two years to negotiate the terms of departure and organise new trading arrangements with hundreds of countries.

A Leave vote could also lead to the fall of the current government and a general election. This uncertainty could have a dangerous economic impact. Many economists believe that the U.K. could go into recession which could unsettle economies all over the world.

In the longer term, by removing itself from the E.U. market, the U.K. would lose the free trade privileges it enjoyed. Conversely, the E.U. would lose the second-largest contributor to its operating budget, and nearly 15 percent of its GDP.

Other issues would be procedural. The nearly 3 million people from other E.U. states who live in the U.K. and the 1.2 million British citizens living elsewhere in the E.U. would have to sort out their new immigration status. British businesses operating in the E.U. would also have to reassess their legal and financial status.

The Leave campaign has support mostly from the right of the political spectrum. The United Kingdom Independence Party, led by Nigel Farage, has pushed for a referendum since it was created in 1993. The former Mayor of London Mayor Boris Johnson and five cabinet ministers also lead the Leave campaign.

David Cameron, the Prime Minister, has been joined by the leaders of nearly all the U.K.’s political parties in pushing for a Remain vote. Almost all foreign leaders who have weighed in — including President Barack Obama, Japan’s Prime Minister Shinzo Abe, and E.U. leaders — want the U.K. to stay. A number of celebrities and artists have also voiced their collective support, and J.K. Rowling herself recently warned against believing in illusory “monsters” by voting to leave.

Polls this weekend were too close to indicate the vote would definitely go one way or the other, but did give a slight edge to the Leave faction. One phone survey gave Leave a 45% lead over Remain, with 42%, and an online poll had results of 44% to 43%. An opinion poll by The Independent showed Leave supporters were far more passionate than Stay supporters, but its hard to drum up fervor for maintaining the status quo.

When will we know the result?

The voting stations will close at 10 p.m. local time, or 5 p.m. EST. There will be some exit polls, but the BBC said it will not conduct one because the margin for error would be too great in this referendum. Results will be counted and released by area beginning after midnight, but since the total number of votes will determine the outcome, officials may not be able to call the election with certainty until the very end.

Those final tallies will come in throughout the night, finishing up by 7 a.m. local time (Bloomberg breaks down the schedule of results nicely here). At that time, 2 a.m. EST, the Chief Counting Officer should be able to announce the winner.

How will this affect the U.S.?

Britain is one of America’s major partners in trade, so this monumental change would throw uncertainty into the future of that relationship — especially if the U.K. enters a recession as a result. The International Monetary Fund warns that a Brexit could lower the output of many economies, including the U.S., by up to half a percentage point. The Euro or pound floundering next to a strong dollar would be a blow to American exporters.

Beyond economic ties, the U.S. government is most concerned about the political instability a Brexit could portend for Europe on the whole. If other states follow suit and leave the largest trading bloc in the world, the entire continent would be weakened — falling into the shadow of a looming Russia. The future of NATO itself could even be at risk. 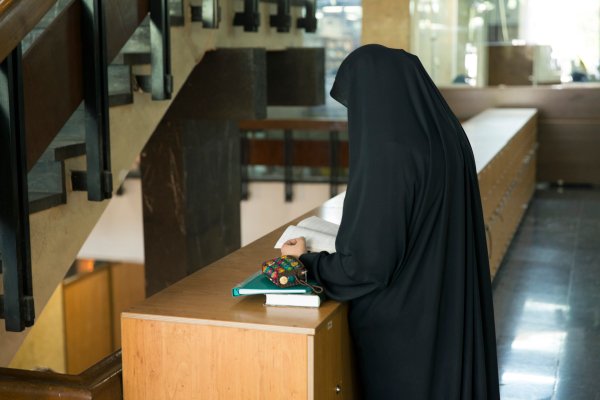 Watch This Woman Discard Her Traditional Clothes in Protest at ISIS
Next Up: Editor's Pick