Vice President Joe Biden delivered a rebuke Monday of the national security policies promoted by presumptive Republican presidential nominee Donald Trump, saying that “it matters how you treat other nations.”

In a speech before the Center for New American Security’s annual conference, Biden argued that the Obama Administration’s foreign policies have left the U.S. “better positioned than any nation in the world” to lead. But he warned the results of the upcoming election could change that.

“If we build walls and disrespect our neighbors we will quickly see all of these policies evaporate” Biden said, a nod to Trump’s plan to build a wall along the southern border of the U.S. “It matters how you treat other nations.”

The Vice President’s subtle wade into 2016 politics—he did not mention Trump by name—came just a week after both the Republican and Democratic presidential candidates laid out their foreign policy and anti-terrorism vision in the wake of the Orlando shooting. The focus of those speeches was largely on counter-terrorism efforts. Trump’s reiterated his call for a ban on Muslims entering the U.S.

On Monday, Biden said “some of the rhetoric” he’s been hearing seems designed to radicalized the world’s Muslims—not just those who are vulnerable to ISIS’ influence—and plays directly into the hands of terrorist actors. “Why in God’s name would we give them what they want?” Biden asked.

Throughout his remarks, Biden said steps the Administration has taken to secure trade deals in the Asia-Pacific region and strengthen relationships with allies have left the country in a strong position. The key, he said throughout his speech, is to ensure the next Administration builds on this work with the nation’s allies and partners in regions across the world. On China, policies with whom Trump has been particularly critical, Biden said engagement is particularly critical.

“The next President will have to manage complex relationships with regional powers,” Biden said. “No where is this more pointed than our relationship with China.”

Biden said the U.S. is at an “inflection point” and warned that the “choices we make today will steer the course of our world for the next three decades.”

“The world desperately needs stead American leadership more than ever,” he said. 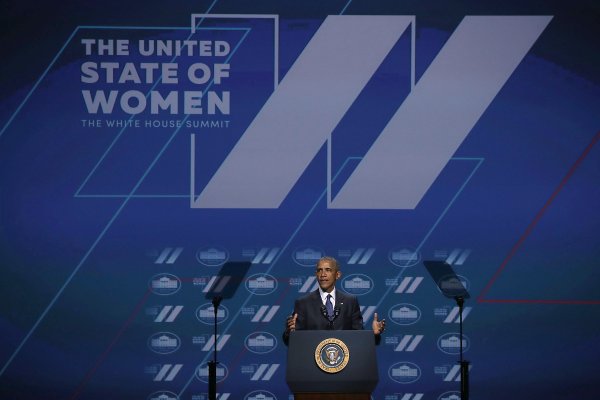 President Obama at Women's Summit: This Is What a Feminist Looks Like
Next Up: Editor's Pick