Britons Must Vote to Leave the E.U., and Hasten its Demise

We have seen the very worst of British politics. The debate provoked by the referendum on Britain’s membership of the European Union has grown so ugly that many decent voters contemplating quitting the E.U. are surely considering switching their vote on Thursday to remain. This would be a terrible mistake. Britain’s future in the E.U. should be decided primarily on the basis of Britain’s experience of being in the E.U. A cause does not lose its validity because aspects of it are supported by people with a dubious reputation.

The E.U., which originated as a liberal marketplace for the advanced economies of the continent, has mutated, over the decades, into a behemoth above democratic restraint. Today, its power to shape public life is matched only by its imperviousness to public opinion. Its laws and regulations, crafted by technocrats immune from electoral accountability, enjoy supremacy over legislation passed by the British parliament. It’s hard to see how parliament can credibly claim to be sovereign as long its legislative power remains inferior to the E.U.’s.

The idea that the E.U. can be reformed from within is difficult to reconcile with facts. At the beginning of the year, the Prime Minister of Britain spent two arduous days pleading with Brussels for permission to alter his government’s costly welfare provisions for migrants from Europe – only to be thwarted by the representatives of Poland, Hungary, Slovakia and the Czech Republic. David Cameron sought to portray the meagre concessions he obtained as a triumph of British sovereignty; his ordeal in fact revealed the extent to which foreign states are able to dictate Britain’s domestic policy. The E.U’s suffocating supranational authority cannot be resisted from within: the only way to be spared its intrusions is to leave it altogether. Any entity that makes surrender of sovereignty the condition of its cooperation should be shunned, not embraced.

Many trade unionists and politicians with long records of anti-E.U. activism, anxious that a victory for Brexit might strengthen the rightwing protagonists of the Leave campaign, have become reluctant converts to Remain. Their timidity should not obscure the harm the E.U. has done to ordinary workers. The hasty manner in which former Soviet satellite states were conscripted into the E.U., partly to gain cheap labour and partly to upstage Russia, has had perverse consequences. It has depressed wages for jobs that were already low-paying, severely bruising sections of society that have long felt disempowered. The E.U. does not create opportunities for low-wage workers in Britain – it intensifies the competition for low-paid jobs. Consider a British company that sells sporting equipment to Europe. The employees who pack its products are not only among the lowest paid – they must fight for their jobs with workers from Europe. The owners of the company profit from access to the single market, while those who toil in its warehouses can only lose from the deluge of workers from the E.U. It is their grievances, neglected for so long by mainstream politicians because they are themselves powerless to tame the E.U., that have powered the rise of rightwing demagogues.

The British labour force, however, is not the worst casualty of the E.U. Some of the most exploited workers in the U.K. – often overqualified and mostly underpaid – come from the E.U.’s poorer member states. If their arrival in Britain creates downward pressure on wages here, their departure from their home countries—as the economist Paul Collier has argued—can cause a debilitating brain drain over there. More troublingly, the E.U., by imposing free movement of people on its members, is helping to retard the long-term progress of Europe’s poorer states, whose leaders are able to evade the onerous task of creating the social and economic conditions in which their citizens may thrive by procuring admission for them to the prosperous nations of Western Europe.

It is clear that, contrary to the lofty claims advanced by the Remainers, the E.U. is not a benign or civilising force. More often than not, it functions as a facilitator and enforcer of lending cartels. Remember Greece? A country ravaged by austerity was ordered last summer by the E.U. to impose yet more crippling austerity on its people. When the Greek government defiantly sought, and received, a fresh mandate from the voters to reject the terms—among them the privatisation of Greece’s electricity grid and ferry services, and the signing away of $50 billion to a private holding company — the E.U. and the I.M.F. effectively carried out a coup. Denying essential services to citizens in order to fill the coffers of creditors amounted, in the vocabulary of the E.U., to responsible behaviour. Greece’s finance minister at the time called it a “postmodern occupation”. But such was the terror of challenging the economic dogmas of the E.U. that European politicians refused to strike a note of dissent.

An entity that trampled on the democratic will of Greek citizens and brought Greece to its knees, and that went on to strike an unconscionable deal to resettle refugees in Turkey—a state that, led by an authoritarian Islamist, is bombing the Kurdish people leading the fight against Islamic State—by bribing Ankara with immediate visa-free travel for its 75 million citizens to much of Europe is not a somewhat flawed institution capable of being perfected with minor fixes: it is a sinister force that deserves immediately to be dismantled.

Supporters of the E.U. can seem like believers in what the Princeton academic Atul Kohli calls a “two-track democracy” – a charade in which “common people are only needed at the time of elections, and then it is best that they all go home, forget politics and let the ‘rational’ elite quietly run a pro-business show”. The Brexit referendum, subjecting the E.U. to intense democratic scrutiny for the first time, has unsettled them. And the apparently high-minded side in this debate, unable to offer hope, has resorted to using fear: issuing apocalyptic prophecies, from the collapse of the United Kingdom to its imminent takeover by fascists. Yet, for all the hostility it has generated, the debate has shed light on the degree to which the E.U. has enabled the marginalisation and exploitation of the weakest people in Europe. The most enlightened thing that ordinary British voters can do, for themselves and for their European neighbours, is inaugurate the demise of the E.U. by voting on Thursday to leave it. 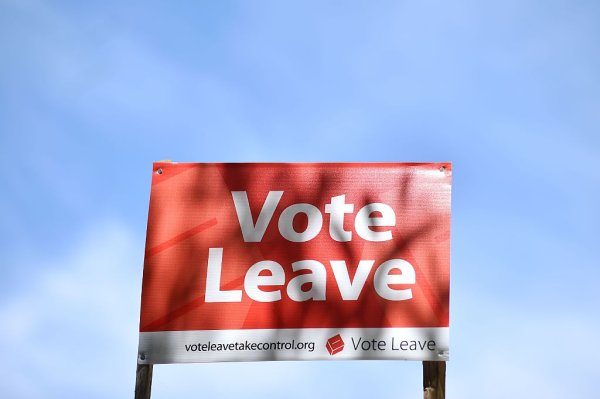 What Anxiety Over Brexit Tells Us About the Markets
Next Up: Editor's Pick