As An Expert on Creating Monsters, J.K. Rowling Made this Intervention in the Brexit Debate

Ahead of the United Kingdom’s vote on whether or not to leave the European Union, author J.K. Rowling has intervened with a lengthy essay on monsters and villains.

Both sides of the Brexit debate have sowed division in the United Kingdom, Rowling writes, with both the “Leave” campaign and the “Remainers” arguing that a vote for the other side would lead to peril. As the author of the beloved Harry Potter series, Rowling compares the “stories” being told by both sides of the debate over whether the U.K. should stay in the E.U. to the process of creating villains in a fantasy novel.

“In a few days’ time, we’ll have to decide which monsters we believe are real and which illusory,” Rowling writes in a blog post. “Everything is going to come down to whose story we like best, but at the moment we vote, we stop being readers and become authors.”

The author, who appears to be in favor of remaining in the E.U., also compares the debate in Europe to the divisive nature of the presidential election in the United States. Rowling warns that the likely Republican presidential nominee Donald Trump is one of few prominent politicians who are in favor of the Leave campaign. “Look towards the Republican Party in America and shudder. ‘Make America Great Again!’ cries a man who is fascist in all but name,” she writes. “He achieved this pre-eminence by proposing crude, unworkable solutions to complex threats. Terrorism? ‘Ban all Muslims!’ Immigration? ‘Build a wall!'”

Rowling argues that she understands why a Leave vote could be appealing, giving the threats all countries face by terrorists, but warns of the greater damage such a vote could cause.

“For many of our countrymen, I suspect a ‘Leave’ vote will be a simple howl of frustration, a giant two fingers to the spectres that haunt our imaginations,” Rowling says. “Yet how can a retreat into selfish and insecure individualism be the right response when Europe faces genuine threats, when the bonds that tie us are so powerful, when we have come so far together?”

Recent polls suggest that the Remain campaign is seeing a bit of light. In the wake of the killing of politician Jo Cox, a poll showed 45% of support for staying in the E.U., while 42% still support exiting. The vote will take place June 23. 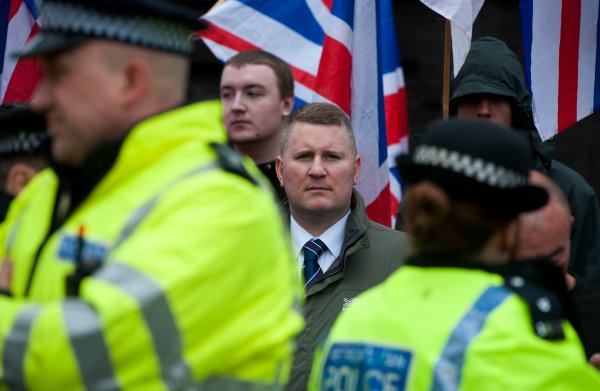