France’s Economy Minister Emmanuel Macron has warned that Thursday’s British referendum on E.U. membership risks undoing the entire European Union, by setting off a chain reaction across the continent.

In an interview with TIME, Macron said: “You can suddenly have a series of countries waking up and saying, ‘I want the same status as the Brits,’ which will be de facto the dismantling of the rest of Europe. We should not replicate the situation where one country is in a situation to hijack the rest of Europe, because they organize a referendum.”

Macron’s strong words reflect a growing fatigue and anxiety on the rest of the continent, after months of fraught political battle in Britain over whether to stay in the E.U. or opt for a so-called “Brexit,” in the tight remain/leave vote on Thursday.

The steward of Europe’s second largest economy after Germany and the U.K. spoke to TIME a few days before British politician Jo Cox was shot dead by a reportedly anti-EU gunman; since then the British referendum has dominated French media coverage, with pundits worrying that an equally deep schism exists in France, and that a “Frexit” might be next. The far-right National Front has ridden a wave of successes in local elections, by pushing to get France out of the E.U.

Europeans have focused much more on what impact Britain leaving the E.U. will have, rather than it staying in. But Macron said the mere fact of a vote is itself a threat. “Even if the Brits decide to remain, we will have to avoid a contagion on other countries,” he says.

The French minister, seen by many as a potential future President, said E.U. leaders must now act to make sure the British referendum remains strictly a one-off event. That would also mean addressing the possibility that Britain will negotiate important concessions from E.U. officials in Brussels even after a vote to remain—something that could render E.U. treaties unworkable, or even meaningless, if it was repeated across the continent.

Macron says that to stave off that prospect, E.U. leaders should quickly make clear they are not willing to negotiate each country’s deal with Brussels. “First, totally express that we ring-fence the U.K., and say, ‘okay, even if they vote to remain, that is a specific status,'” he says, outlining what leaders need to do after Thursday.

Just 38, Macron is a popular figure in France, his ratings far eclipsing those of his mentor President François Hollande. Even though he was appointed to his ministry without being elected, many in France believe he is weighing the prospect of running in next year’s presidential elections. As such, his words carry weight beyond his youth and relatively few years in government.

Macron says leaders should seize on the British referendum as the moment to overhaul the E.U. itself. “My view is that we should propose a new, very bold and visionary scheme for the E.U. and the Eurozone,” he says, referring to the 19 E.U. countries which use the Euro currency. That includes “more efficiency, less bureaucracy, more competitiveness, more short-term reaction, more protection, and an actual single market.”

Those are the issues on which Europeans could vote in referendums, Macron said. “You need a debate and a vote on the principles: Do you want more Europe or less Europe? Do you believe we are more efficient with defense and security with Europe, or not? Do you believe we are more efficient for our companies with or without Europe? Those are the questions we have to discuss and push our people to vote on it.” 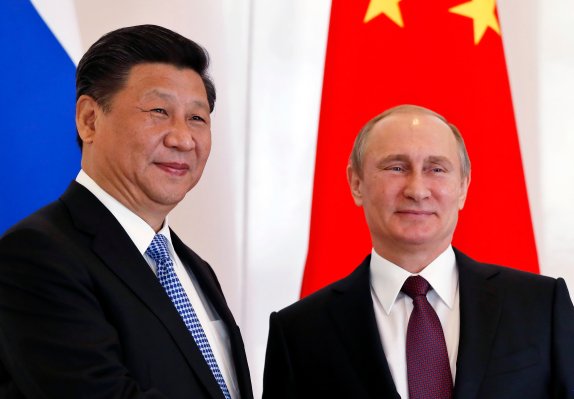 Russian President Vladimir Putin to Visit Xi Jinping in Beijing This Week
Next Up: Editor's Pick