How the European Union Helped the U.K. and Ireland Move From War to Peace

The European Union came into being with the ambitious purpose of copper-fastening peace in Europe. But since Britain and Ireland joined together in 1973 it has had a transformative impact on Ireland’s relations with our nearest neighbour, for centuries uneasy and sometimes bloody. I want to argue that the E.U.’s record with regard to Ireland and the U.K. represents a microcosm of the Union’s wider achievements in resolving age-old, continental rivalries during the past six decades.

In current debates about Europe, there is, I think, an undue stress on Europe’s inevitable reverses and imperfections, and not enough attention paid to the significant plus side of the ledger. Those who fume about E.U.-related irritations are failing to distinguish the wood from the trees, ignoring the big picture. And there is an Irish corner to that big picture.

There is a lot at stake for Ireland in the U.K.’s E.U. referendum and we have a unique perspective founded on the intensity of our connections. As a friendly neighbour, it would be remiss of us not to draw attention to the Irish-U.K. dimension to the European story.

When Ireland and the U.K. joined the E.U. on the same day, Ireland had been independent for just 50 years. There were those who wondered why a country that had struggled so long to assert its independence was willing to enter into a relationship with European partners that involved at least some dilution of our hard-won sovereignty.

The answer is that, from the beginning of our membership, Ireland freely embraced the idea of pooling sovereignty in order to attain improved social and economic outcomes for our people and to promote peace and co-operation in Europe. And E.U. membership has worked well for Ireland in that the significant gap in prosperity that existed in 1973 between Ireland and our European partners has now been bridged. Ireland is comfortable with the challenges and opportunities of E.U. membership and, whatever happens in the U.K. on 23 June, we will continue to be a member of the Eurozone and the E.U.

When Ireland joined, in practice the principal driver for us was the fact that our intensive economic links with Britain left us with no practical alternative to membership. There was also hope that membership might serve to reduce our economic dependence on the U.K. Ireland was excessively dependent on trade with the U.K. More than 60% of Irish exports went across the Irish Sea. It was a lopsided relationship, absolutely vital for Ireland, but of limited relevance to the U.K. We were part of the sterling area, but had no say in the shaping of the monetary policy by which we were bound.

An enhancement of Irish-U.K. relations was probably not seen as a likely consequence of membership, but that is what has occurred. Our bilateral relations have thrived within the multilateral setting provided by the E.U., this unique form of international partnership between former rivals and antagonists across the continent.

Political ties were strained and often quite remote. The partition of Ireland left a troublesome legacy. As late as the 1950s, Ireland was campaigning internationally against partition. There was strife between us on constitutional issues throughout the 1930s as the independent Irish State sought to complete its political separation from the U.K. The outbreak of the Northern Ireland Troubles occurred just four years before our two countries joined. At that time, London and Dublin had very different approaches to the Northern conflict and how it might be resolved.

As I look back over the 35 years of my professional career, the transformation of relations between Ireland and the U.K., symbolised by the hugely successful exchange of State Visits in 2011 and 2014, is an unmistakable highlight. Relations have progressed from being a problem to being a realm of mutual opportunity that both of us are keen to grasp. How has this occurred?

It is true, of course, that many factors have played a role, but it would be foolish to discount the impact of E.U. membership. The experience of working together on European issues over such a protracted period has helped Ireland and the U.K. to understand each other better. We have come to realise how much we have in common. The suffocating narrowness of bilateral relations has been superseded by an intensive, cooperative engagement with an extensive European policy agenda.

During our years together as partners in Europe, Irish and U.K. ministers and officials have built networks of friendship and cooperation. This ultimately helped to give both sides the confidence in each other that provided vital underpinning to the inevitably difficult and protracted negotiations that brought peace to Northern Ireland.

Today Ireland and the U.K. enjoy a mature friendship founded on our many affinities and on the shared interests that have developed in the four decades of partnership within the E.U.

E.U. membership has enabled our trade to expand and diversify. Once dominated by food exports from Ireland and industrial goods from the U.K., trade across the Irish Sea is now valued at €1.2 billion each week. Our trade in services now exceeds our goods trade in value. This trading relationship is no longer lopsided as Ireland, with a population of just 4.6 million, is currently Britain’s fifth biggest export market. This remarkable fact illustrates the enduring significance of geographical proximity, even in a globalized trading environment.

E.U. membership has helped connect the economies of the two parts of Ireland. The establishment of the European single market has also brought a single market to the island of Ireland. There is now an open border in Ireland, bringing a range of benefits for both sides. Any need to impose customs controls would be a setback for the expanding ties between North and South, which represent an important strand of the successful Northern Ireland peace process. If it became necessary to consider controls on freedom of movement across the Irish border that would be, in the words of our Foreign Minister, Charlie Flanagan, ‘a nightmare of huge proportions.’

Ireland and the U.K. can be proud of what has been achieved in recent decades in Northern Ireland and in the fundamental improvement of relations between us. I would not dream of suggesting that all of this progress would come to come to nought if the U.K. were to leave the E.U. However, as I heard our former President Mary McAleese, say recently, the new friendship between Ireland and the U.K. “has not been stress tested” for a future with one country as an E.U. member and the other outside.

A British exit from the E.U. would be a serious step, with uncertain consequences for the E.U. and for the mutually beneficial friendships that have evolved in our part of the world, including between the U.K. and Ireland.

While Europe’s present condition is a troubled one on many counts, the fact is our continent remains a remarkable bastion of stability and prosperity. The past sixty years have been so much better for Europe than the preceding decade that we should be very slow to consider going our separate ways.

That is why we hope that U.K. voters will decide to remain in the E.U. in their referendum on 23 June. 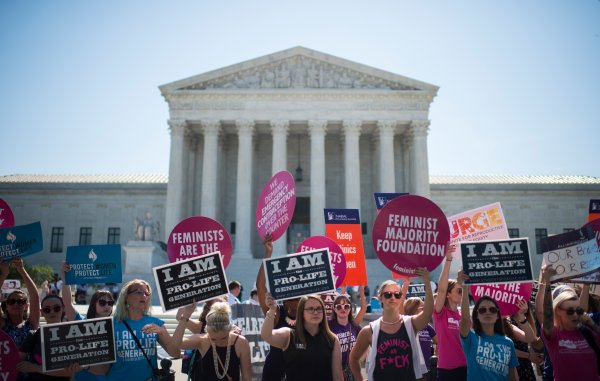 Pro-Choice Catholics Are Praying SCOTUS Will Protect Abortion Rights
Next Up: Editor's Pick