Raghuram Rajan, governor of the Reserve Bank of India (RBI), looks on during a Bloomberg Television interview at the World Economic Forum (WEF) in Davos, Switzerland, on Thursday, Jan. 21, 2016.
Bloomberg via Getty Images
By Nikhil Kumar

The comings and goings of central bankers seldom make front-page news. But the surprise announcement on June 18 by Raghuram Rajan, India’s top central banker, that he would return to academic life in the U.S. when his current term expires in September, has dominated national attention here and touched off a public debate about the Narendra Modi government’s attitude towards independent and sometimes politically inconvenient voices.

An articulate, former International Monetary Fund (IMF) chief economist, Rajan cut an unusual figure in the otherwise staid world of central banking. Lauded as an economic seer for predicting America’s subprime mortgage crisis, the former University of Chicago professor’s fame spread beyond the financial pages when he returned to India in 2012 to work as an advisor to the previous Manmohan Singh-led government. (He had been an honorary advisor to Singh since 2008.)

In 2013, he was despatched to the Reserve Bank of India during a period of rising alarm as inflation spiked and India’s currency fell to record lows. Amid the gloom, the national press portrayed Rajan as a James Bond-like savior for the flagging economy. In a memorable front-page headline to go with an illustration of the 53-year-old brandishing a pistol made out of currency notes, the daily Economic Times newspaper marked his appointment by proclaiming: “Name’s Rajan, Game’s Bond.” Days later, a popular columnist swooned that Rajan had “put ‘sex’ back into the limp Sensex,” a reference to the country’s leading share index.

Plaudits, albeit less colorful ones, were also forthcoming from the world of business and finance, as Rajan’s policies helped check inflation, stabilized the Indian rupee and strengthened the country’s foreign-exchange reserves. Not everyone was a fan. For some, Rajan’s hawk-eyed focus on inflation had made him too hesitant to cut interest rates, a stance that his critics said hurt small businesses that had to pay more to finance their borrowings.

But in the run up to his decision to return to Chicago, the celebrity central banker found himself subjected to a very different kind of spotlight, as a vocal member of Prime Minister Modi’s Bharatiya Janata party targeted him with an increasingly personal campaign.

Like some in the economic world, Subramanian Swamy, a one-time economics professor turned political provocateur, accused Rajan of keeping interest rates unnecessarily high and not doing enough to deal with the bad loans piled up on the balance sheets of India’s publicly-owned banks. But he did not stop there. Swamy, who was given a parliamentary seat by the Modi government earlier this year, went on to attack Rajan for not being “mentally fully Indian” because he maintained a U.S. Green Card. “Otherwise why would he renew his Green Card as RBI governor by making the mandatory annual visit to the US to keep the Green Card current?” he asked in a letter to Modi. Rajan’s appointment as the head of the central bank should be terminated “in the national interest,” he added.

Swamy also took issue with the fact that Rajan had “in effect held our government responsible for the ‘climate of intolerance in the country’,” an apparent reference to a speech by the central bank chief in October in which he made an appeal for “tolerance and mutual respect” for diverse opinions. Although he did not single out any group, Rajan made his remarks in a charged political environment—for months, the headlines had been dominated by a frenzied political debate about whether the space for dissenting views was shrinking under the rule of Modi’s Hindu nationalist party. Rajan’s post, along with his status as a national celebrity, ensured that his comments broadcast well beyond the university campus where he made them.

Rajan also ruffled some political feathers in April, when he compared India’s position as the world’s fastest growing large economy to that of a “one eyed king in the land of the blind,” a remark that he later clarified was meant to underscore the fact that India’s relative “outperformance was accentuated because world growth was weak.” He said he was warning against excessive euphoria. “Our current growth certainly reflects the hard work of the government and the people of the country, but we have to repeat this performance for the next 20 years before we can give every Indian a decent livelihood,” he explained.

Amid these tensions, bankers and economists soon began to wonder whether Rajan would stay on after September, when his current three-year term in office came up for renewal. Since the early 90s, all of Rajan’s predecessors have had their tenures renewed for a further two years, and the expectation was that the Modi government would maintain the trend, not least because of Rajan’s credibility among economists and international investors.

Since assuming office, he has won widespread praise both at home and abroad for bringing stability to a shaky economy. Only days before Rajan’s weekend announcement, NR Narayan Murthy, the founder of the Indian IT giant Infosys and one of the country’s best known businessmen, said he hoped that the government would ask Rajan stay on for not one but another two terms. In a late April Bloomberg poll of 15 economists, thirteen said they expected Rajan to get an extension. Only one thought that an extension was unlikely.

The confidence in Rajan, moreover, was in contrast to growing questions in many quarters about the Modi government’s ability to deliver on some of its key economic pledges. Modi came to power promising sweeping reforms to India’s economic architecture. But his government has failed to implement key proposals to overhaul the country’s restrictive land and tax laws as it struggles to build a political consensus behind its plans in the national parliament.

It was against this backdrop, and as Modi maintained an impassive silence on Swamy’s personal crusade against the central bank chief, that Rajan announced his departure over the weekend.

In a message to Reserve Bank of India staff, he said it was a decision that he had taken “on due reflection and after consultation” with the government. “I am an academic and I have always made it clear that my ultimate home is in the realm of ideas,” he wrote, recounting the bank’s achievements on his watch and saying that he would “always be available to serve my country when needed.” Modi’s finance minister, Arun Jaitley, soon took to Twitter to thank him for his work.

Notably, the central banker’s statement also made clear that he had been “open” to staying in the job, a telling qualification given recent events. In an editorial the next day, the Indian financial daily Mint did not mince its words on what it called “The Raghuram Rajan Affair.” “One of the few surviving quality institutions left in the country has been rattled badly,” the editorial said, adding: “It is not that Rajan has not had his critics… But criticism is one thing while personal attacks are [another] thing altogether. One can only speculate about what this sorry episode will mean for the next governor.”

As the Modi government struggles to implement its reform agenda, many are also wondering what Rajan’s departure means for the Indian economy. 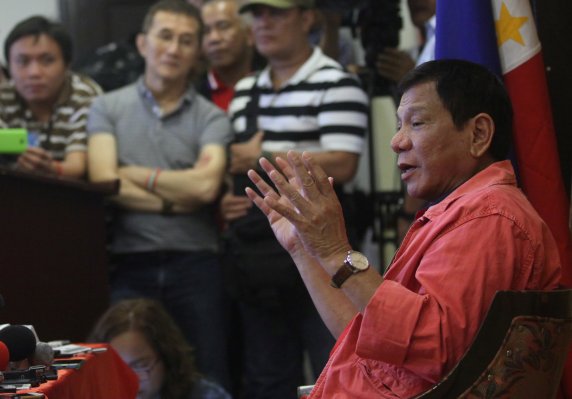 Rodrigo Duterte Meets With Islamist Rebels
Next Up: Editor's Pick