This Is How the GOP Could Dump Trump

Donald Trump speaks during a campaign event in Atlanta, Georgia, on June 15, 2016.
Luke Sharrett—Bloomberg/Getty Images
Ideas
By Elise Jordan
Jordan is a TIME columnist, an NBC News/MSNBC political analyst and a co-host of the Words Matter podcast.

Last week, a delegate to the RNC’s convention rules committee speculated to me that it would take four or five terrible weeks like last week, when Trump ranted about the Mexican ethnicity of an Indiana-born judge, for convention delegates to block Donald Trump as the Republican nominee for President.

Welcome to the end of Donald Trump’s terrible week two.

Trump’s sickening victory lap following the massacre of 49 victims in Orlando made the seemingly impossible increasingly plausible: for Republicans who oppose him to wrest the nomination from his short-fingered grip.

“Even in election cycles when there isn’t a potential contested convention on the horizon, there’s an enormous amount of work put in by the presumptive nominee to make sure you get your people elected to the rules and platform committees and as delegates at large,” Yob told me. And though Trump’s team hasn’t put in this legwork, neither have those who oppose him. As Yob points out, “It’s a massive undertaking to change the will of the people in control of the convention.”

It’s time for GOP leaders and grassroots activists to step up and make the case for dumping Trump: the brand licensor is simply not electable. According to a recent Washington Post/ABC News poll, there are now more anti-Trump American voters—seven out of ten Americans—than Republicans who will vote for Trump. (The poll was taken before Trump gloated over the bloodshed of 49 innocent people, so Clinton’s overall 12 point lead could potentially be even larger.) At Trump’s current level of support, it’s far-fetched that Trump could even win as many electoral votes as Mitt Romney.

With historic unfavorables and only 143 days until the election, a Republican victory is at the mercy of Clinton getting indicted by the Obama Justice Department. By nominating Donald Trump, Republicans might as well coronate a corrupt and craven politician with terrible judgment on the most pressing national security issues of our era. Republicans will hand the White House to Hillary Clinton in a historic loss, with countless down ballot races in peril because of Trump’s toxicity to so much of the electorate.

The fault line navigated by GOP leadership through this entire embarrassing debacle has been neutering Trump without alienating his supporters. Is this as much of an issue for the party if today, not even half of voters who are conservatives view him favorably?

In 2012, white uneducated voters—Trump’s critical voting bloc—only comprised 36 percent of the electorate. Though he may love the “poorly educated,” they don’t love him back; Trump declined in double-digits with this group over the past month. Keep in mind that since 77 percent of women don’t like Trump, that leaves him with only a fraction of potential female voters to begin with.

The 112 members of the RNC convention rules committee, now led by Mickelson, will set in motion the fate of the party. The rules committee delegates I spoke to all stressed it would take many unbelievably terrible weeks for the rules committee to make the necessary changes to block Trump from the nomination— “[Trump] might actually have to shoot somebody on Fifth Avenue in New York,” one delegate told me. (Remember when Trump actually claimed he could “shoot somebody” and not lose voters?)

Electability would be the decisive game changer pushing rules committee delegates to take a hard look at opening up the convention to other candidates. “The Republican rules aren’t a suicide pact,” another rules committee delegate explained to me in an interview. “We don’t have to nominate someone who we know will get creamed in the fall.”

And if the rules committee is stacked with anti-Trump and pro-Cruz delegates—which does seem to be the case—the week before the RNC convention could be the most interesting, if party leaders and activists will step up and make clear the only message that matters: Trump will be a huge loser in November.

The big question will be if the committee votes to free up “bound” delegates. To dump Trump, a majority of the convention delegates would have to vote for the change to open up the floor for other candidates.

Trump would be able to call the system rigged—so let him. Trump clearly doesn’t represent the majority views of the party, and he didn’t win a majority of the primary or caucus votes.

The Republican party needs to remember the mission for America that Reagan so eloquently outlined in 1982:

“At the root of everything that we’re trying to accomplish is the belief that America has a mission. We are a nation of freedom, living under God, believing all citizens must have the opportunity to grow, create wealth, and build a better life for those who follow. If we live up to those moral values, we can keep the American dream alive for our children and our grandchildren, and America will remain mankind’s best hope,” said Reagan, in celebration of Hispanic Heritage Week, at the White House.

That’s a mission and a vision of the party and country that Republicans can still save from Donald Trump—and where there’s a will, there’s a way. 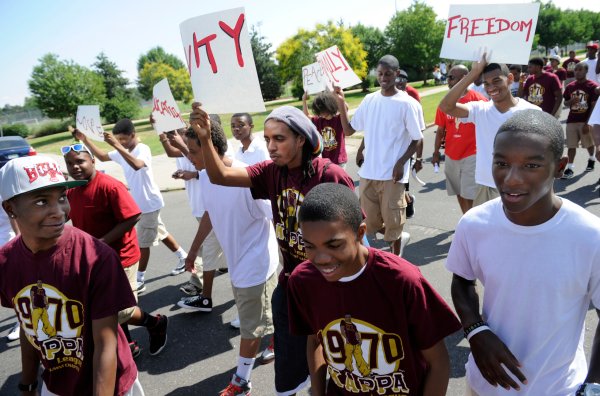 Why All Americans Should Celebrate Juneteenth
Next Up: Editor's Pick