Members of the GOP Convention Rules committee are planning to consider an amendment to allow delegates a way out of voting for Trump on the first ballot—an effort that in an extreme could be used to deny him the nomination.

Under the proposal, delegates could be granted conscientious objector status, thereby freeing them from their pledge to vote as they are bound as the result of primaries and caucuses. The measure, first put forward by Colorado delegate Kendal Unruh, would undo the strict ‘faithless-delegate’ rule enacted at the GOP convention in 2012 and allow a “vote of conscience, whether personal or religious” by delegates.

“Allowable personal reasons shall include the public disclosure of one or more grievous acts of personal conduct by a nominee candidate, including but not limited to, criminally actionable acts, acts of moral turpitude or extreme prejudice, and/or notorious public statements of support for positions that clearly oppose or contradict the policies embodied in the Republican Party’s platform as established at the national convention,” the amendment says.

Nearly all convention delegates are bound under the current rules—at least on the first ballot—by the results of primaries and caucuses in their states and territories. At minimum the proposed amendment would free frustrated delegates from having to vote for Trump, and in the extreme could deny Trump the 1,237 delegates required to win the nomination—even on the first ballot.

On Friday, RNC Chairman Reince Priebus announced the selection of the chair and co-chair of the Convention Rules Committee, Utah National Committeewoman Enid Mickelson and Massachusetts National Committeeman Ron Kaufman. Both have spoken negatively about Trump in the past, but are viewed as party institutionalists. On Friday afternoon, the RNC Counsel’s Office distributed copies of the party’s current rules and proposed changes recommended by the RNC’s standing committee on rules to all members of the convention rules committee. In the week before the Cleveland convention, the convention rules committee and the full convention will have to approve the new rules, as well as any proposed amendments.

The circulating draft is one of several proposed amendments designed to undermine Trump or alleviate the concerns of delegates at the convention. A more radical proposal would unbind all delegates for any reason, while more limited measures would provide delegates with other outlets to voice their frustration with Trump at the convention.

In an interview with TIME last week, Trump said he had “no comment” about whether delegates who don’t support him should be removed from the convention, but said that those seeking to undermine him already “had their chance.”

This Is How the GOP Could Dump Trump

The convention rules committee is made up of one man and one woman from each of the 50 states, U.S. territories, and the District of Columbia. Dominated by party insiders and loyalists to Texas Sen. Ted Cruz—who aggressively worked state conventions to secure slots on the committee—it remains to be seen what the committee’s appetite would be for such a dramatic break from the existing rules. It is complicated further by the Republican National Committee’s embrace of Trump early last month, even as some party leaders are reversing their earlier decisions to support Trump.

In an interview with NBC’s Chuck Todd this week, Ryan gave members of his conference the leeway to avoid backing Trump. “The last thing I would do is tell anybody to do something that’s contrary to their conscience,” he said.

The text of the proposed rule: 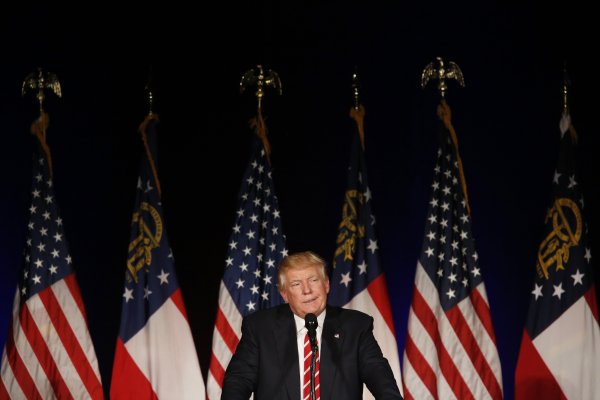 This Is How the GOP Could Dump Trump
EDIT POST