The world athletics governing body on Friday crushed hopes that Russian track-and-field athletes would be able to compete in the upcoming Olympic Games in Rio de Janeiro, upholding a ban that resulted from the discovery of a massive, state-backed doping conspiracy.

Speaking in Vienna on Friday, the leadership of the International Association of Athletics Federations, or IAAF, said that Russia had not done enough to convince global sport of the integrity of its athletes.

“Although good progress has been made, the IAAF Council was unanimous that Russian athletes could not credibly return to international competition without undermining the confidence of their competitors and the public,” IAAF President Sebastian Coe said at a press conference.

The council ruled that Russia had failed to meet several criteria for the reinstatement of its athletes ahead of the Olympic tournament in August, including the creation of a “culture of zero tolerance” towards doping and the establishment of an effective drug-testing system.

The Russian Sports Ministry said in a statement it was “extremely disappointed” at the IAAF verdict.

“Clean athletes’ dreams are being destroyed because of the reprehensible behavior of other athletes and officials,” the statement said. “They have sacrificed years of their lives striving to compete at the Olympics and now that sacrifice looks likely to be wasted.”

Ahead of the IAAF ruling, several Russian athletes vowed they would contest a blanket ban in court.

“It is a violation of human rights and it is discrimination,” the renowned pole vaulter and two-time Olympic champion Yelena Isinbayeva, told TIME in May. Isinbayeva on Friday confirmed she would fight the ban at the International Court of Human Rights, telling the state-run TASS news agency: “I’ll show the IAAF and WADA [the World Anti-Doping Agency] that they’ve made the wrong decision. I’ll do it demonstratively, so that they understand that Russia won’t stay silent.”

Dmitry Peskov, a spokesman for the Kremlin, also warned earlier on Friday that “everything possible needed to defend the rights of our athletes and the Olympic team is being done and will be done at a legal level.”

In an apparent attempt to prevent too much legal tussling, the IAAF announced that it had changed its rules to allow for “a tiny crack in the door” for some Russian athletes. The possible exemption would apply to “any individual athlete who can clearly and convincingly show that they are not tainted by the Russian system because they have been outside the country and subject to other, effective anti-doping systems,” Rune Andersen, the IAAF Taskforce independent chairperson, said.

Individual applications would be reviewed by the IAAF itself and successful candidates would not be allowed to compete under the Russian flag, he added, warning: “There won’t be many athletes who will manage to get through that crack in that door.”

The IAAF first suspended Russian track-and-field athletes from international competition in November after a report by the World Anti-Doping Agency detailed a widespread state-run doping program.

Since then, further allegations of foul play have been made by several whistleblowers, including the former head of Russia’s anti-doping laboratory Grigory Rodchenkov. In an explosive article in the New York Times in May, Rodchenkov described an elaborate cover-up scheme during the 2014 Games in Sochi in which dirty urine samples were switched for clean ones with the help of Russia’s state security service, the FSB.

The Kremlin has consistently denied any claims of involvement, pointing the finger instead at individual athletes and their entourage. Speaking to TIME last month, Mutko, the Russian sports minister, said he had “no knowledge” of the reported involvement of the FSB, adding that every one of WADA’s allegations was being investigated.

Leading up to the IAAF’s decision, Mutko has made public overtures to convince decision-makers that Russia has changed its ways.

In an open letter to the IAAF, Mutko reiterated Russia’s commitment to overhauling its track-and-field structures and drug testing bodies. He also said Russia’s Olympic athletes were undergoing rigorous testing by international drug monitors — guaranteeing they were clean.

“Clean athletes should not be punished for the actions of others,” he wrote.

Yet the IAAF ruling comes as little surprise, with reports mounting in recent weeks that appear to confirm the continuing existence of a culture of cheating in Russian sport.

Earlier this week, WADA released a second report in which it accused Russia of obstructing the work of international doping monitors. It also said there had been 52 failed doping tests and claimed some Russian athletes had deliberately tried to cheat. In one case described by in the WADA report on Wednesday, an athlete allegedly inserted a container with clean urine inside herself. Other athletes had simply run away from drug control officers, WADA said.

In a statement on its website, WADA said it “fully supports” the decision taken by the IAAF and said it was continuing to investigate allegations of doping in Russia.

Richard McLaren, who leads that investigation, said in a statement on Friday that he had found evidence of the Russian Sport Ministry’s involvement in covering up positive samples, “before, during and after the IAAF Championships in 2013.” The results of the probe are set to be published in mid-July.

In a separate investigation aired last week, journalists at the German television network ARD claimed to have found evidence that banned Russian sports officials, including race-walking coach Viktor Chegin, were still working with the Russian national team. The filmmakers also alleged to have proof that Mutko had been personally involved in covering up the positive doping results of a Russian soccer player.

Friday’s IAAF ruling is sure to further ratchet up tension between Russia and the West, amid complaints in Russia that it is being singled out unfairly.

Speaking at the St. Petersburg Economic Forum on Friday before the IAAF’s announcement, President Vladimir Putin warned against demonizing Russia.

“If somebody is trying to politicize this, that’s a big mistake,” he said. “The responsibility … should be highly personalized.”

Coe, the IAAF president, on Friday dismissed suggestions that the ban was politically motivated. “Politics was not playing a part in that room today,” he said about the decision to leave the suspension in place.

Russia’s last hope is now with the International Olympic Committee (IOC), which is set to meet in Lausanne, Switzerland, on June 21. In theory, the IOC could overturn the doping ban. Such a decision, however, would be highly controversial and likely to be seen as an affront to the authority of the IAAF.

Still, the Russian Sports Ministry appeared on Friday evening not to have lost all hope. In its statement, it appealed to the IOC “to not only consider the impact that our athletes’ exclusion will have on their dreams and the people of Russia, but also that the Olympics themselves will be diminished by their absence.” 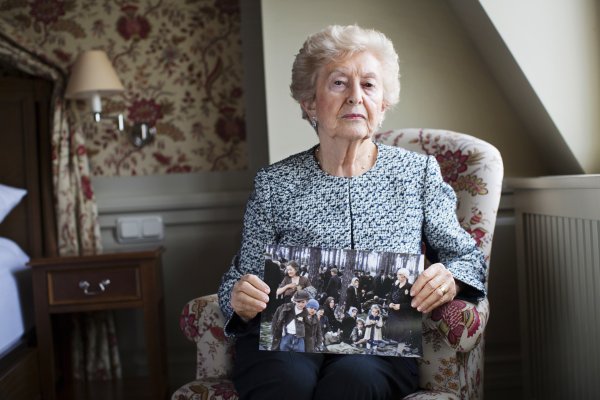 Survivor on Nazi Trial Verdict: 'The Pain Never Goes Away'
Next Up: Editor's Pick