Why These People Are Upset About Apple's Latest Updates

Every summer, the faithful flock to California or load up their web browser for the Worldwide Developer’s Conference, or WWDC, during which Apple unveils new features coming to its smartphones, computers and other gadgets. For fans, the event is a chance to get an early look at what’s coming next. For the Cupertino-based company, it’s an opportunity to strengthen its ties with the vast community of independent programmers who make useful or entertaining apps for its devices.

The keynotes are full of new products, features and demos. The crowd “oohs” and “ahhs” over new or long sought-after additions to Apple’s hardware and software. But octaves below that excitement, you will sometimes hear the grumbling of developers whose creations already performed similar functions to what Apple had just announced.

Making iPhone apps can be a lucrative business. Developers make $8,100 a month per app on average, according to recent research by inMobi, though 55% of developers earn just $1,000 per month (that later stat includes Windows and Android coders). The business exists largely because of Apple’s App Store, which accounted for nearly two-thirds of all paid app revenue worldwide, or $20 billion as of last year, according to tracking firm App Annie. While app developers’ revenue depends on App Store access, some are left upset when Apple includes a feature similar to their own idea in a new product update.

Programmers Ben Erez and Mohammed Islam are two such developers. Their software, a stress relief and “mindfulness app,” is called Breathe. That’s the same name Apple gave to a similar feature announced at this year’s WWDC for the Apple Watch.

“I was pretty incredulous,” says Erez of learning about Apple’s announcement. “The words [Apple used when introducing the feature at WWDC] were almost verbatim to some of the words that we used to describe what we offered for the last 15 months.”

Developers are made aware of this risk before they begin selling their apps. According to the Apple Developer Agreement, a document that every iPhone developer signs when submitting software for inclusion in the App Store, Apple maintains a “right to develop, acquire, license, market, promote, or distribute products … that perform the same or similar functions as … technologies that you may develop.”

Even without that clause, experts say developers can have trouble protecting their software’s basic functions. “You are ordinarily are free to take other people’s ideas, nothing will protect your idea,” says Mark Jaffe, a New York-based lawyer who specializes in copyright, trademarks, and startups. “Copyright laws won’t protect the functions, even though they protect the code.”

For his part, Erez argues the clause means “Apple is allowed to use developers as an R&D arm.” A spokesperson for Apple did not respond to requests for comment on this story.

Austrian programmer Matthias Hochgatterer can sympathize with Erez. In revamping its smart home strategy, Apple last week also announced an app called Home. The software has similar basic functionality and the same name as Hochgatterer’s $14.99 app, which gives smart home aficionados a single interface from which they can control their myriad connected devices, like lights and thermostats.

“Having Apple as a competitor is not good news for me,” says Hochgatterer, who will continue work on his app.

Still, some developers described the experience as somehow validating. “In a sense, I’m happy because Apple acknowledged a technology that I found interesting as something they’re integrating into their operating system,” says Danilo Torrisi. He’s an Italian programmer who created Command-C, a productivity app similar to Apple’s new Universal Clipboard feature. “When you get ‘sherlocked’ by Apple … there is still some market for some different feature,” he says.

That term, “sherlocked,” was evoked by several coders. Dating back 14 years, it’s a reference to Apple’s decision to integrate features similar to third-party software called Watson into Sherlock, a search function in early versions of Apple’s OS X Mac software.

“Any software developer has to live under the idea that they could get ‘sherlocked’ at any time,” says Watson creator Dan Wood. “If someone’s going to write an enhancement to the experience of using a Mac or iPhone, they are going to have to be prepared that Apple may come along and do something maybe not quite as good, but something similar.” 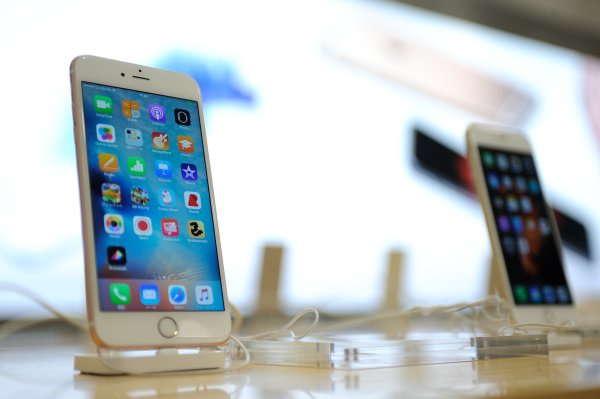 Here's the Latest Rumor About the Next iPhone
Next Up: Editor's Pick