Why Dads Are the New Heroes

Thirty years ago, when I first began teaching about masculinity, I’d ask my students who their heroes were. I’d get a predictable response: a near-equal split among athletes (Muhammad Ali, Michael Jordan), rock stars (Bruce Springsteen, Michael Jackson) and movie stars (Clint Eastwood, Arnold Schwarzenegger), with the occasional smattering of public figures, both living and dead (Martin Luther King, Gandhi, Jesus). Heroes were larger than life, embodying those traits that mere mortals could only imagine: being the best in the world at what they do, transcending the immediate moment for the eternal.

Today, that heroic landscape has changed dramatically. Sure, about half the class still lists athletes (LeBron James, Steph Curry), rock stars (Kanye West, Justin Bieber) and movie stars (pick your superhero). And sure, there remains a smattering of public figures (usually President Obama). But the single most common answer today—in a world of political cynicism and a 24/7 news cycle that digs up dirt on anyone who sets foot on the public stage—is “my dad” and “my mom.”

Celebrities are too distant, and the constant glare of the paparazzi flashbulbs reveals their many flaws. But parents are really there, working hard and sacrificing for their families, emotional advisors, counselors and even friends.

Lest this seem idiosyncratic, it’s confirmed in recent surveys. More than half of young people name a parent. There’s a pretty clean gender breakdown: with some crossover, of course, girls name their moms, and boys name their dads.

That girls would see their moms as heroes is interesting but not surprising. Many young women say they either text or talk with their moms every day, even after they’ve gone off to college. They talk about their lives and express their emotions. They often think of their moms as older friends.

That boys name their dads more often than any single public personality is, however, a bit surprising. For one thing, heroes are often more important to boys than they are to girls. Having heroes, role models, ideal visions to aspire to—these are long-standing themes of boyhood.

For decades, many critics complained that fathers were married to their work and absentee landlords at home, more like Don Draper and Mr. Mom. Earlier in the century, critics called fatherhood “a Sunday institution.”

But dads have to “be there” to be seen as a hero to young boys, who contrast their active and involved fathers to the remoteness of the celebrity models. So the fact that children see their fathers as their heroes tells us something not about the paucity of appropriate public role models, but about a richer abundance of time and energy that men are expending to be present in their families.

This shift is borne out in recent studies that find women and men equally committed to balancing work and family life and to being involved parents. And the dads, too, have some role models—other dads who go to extraordinary lengths to fully care for their families. Men like Will Pemble, a California engineer who took his son, Lyle’s interest in rollercoasters to new heights—building one for him in their backyard. Or Rocco Forgione and Corey Martin, who completely uprooted their lives when their son was born, so they could be near supportive family and friends. Or Miguel Avila, who logged countless hours of dance lessons because his daughter’s most fervent wish was to hip hop dance with her dad at her Quinceanera.

But many new dads express a more everyday heroism. In fact, it’s not even really heroic at all; it’s just called life. Men are doing more childcare (though not, alas, not that much more housework) than they have ever done in our history. Most new fathers are even adept with diaper changing!

And more than that, men’s attitudes have shifted. No more do qualities such as caring and nurturing make a man seem less “manly.” According to a recent survey by DoveMen+Care, on which I consulted, 7 out of 10 American men believe that being a real hero means putting other’s needs first.

This is a significant change. For decades, social scientists observed a growing gap between what men would say it means to be a man and what they were actually doing. While they clung fast to traditional definitions of emotionless, dutiful, hardened creatures who never cry and win at all costs, they also were spending more time with their families. This gap has begun to close—because men have begun to shift their attitudes about masculinity. Right alongside that archaic manly stoicism comes being caring, nurturing and being emotionally present.

Of course, caring for others has long been an abstract American masculine virtue: think of manly sacrifice in war movies or the heroic Western loner, who saves the town from the bad guys and then rides off into the sunset. Today, though, fathers are caring in more concrete and less abstract ways. Rising above the mundane, today’s Western hero rides off into the sunset because he needs to be home to share the cooking and washing the dishes before he puts the baby to bed. Now that’s everyday heroism! 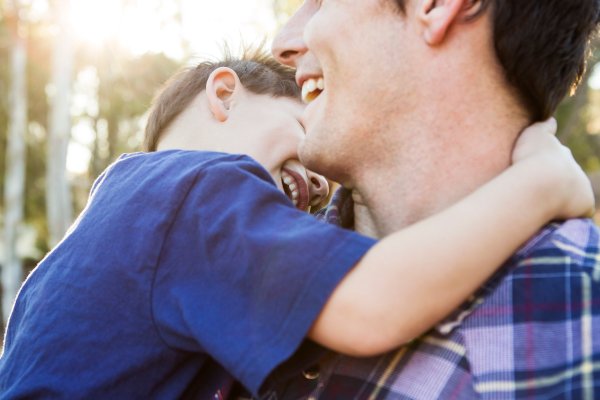 5 Lessons My Autistic Son Taught Me About Fatherhood
Next Up: Editor's Pick