Tributes have flooded in for British MP Jo Cox, who has died after being shot and stabbed while in her constituency in northern England.

The Labour Party politician, 41, was taken by air ambulance to a hospital in the nearby city of Leeds after the attack. According to West Yorkshire Police she was pronounced dead at 1.48pm GMT.

The mother of two was elected to represent Batley & Spen constituency in 2015. She is co-chair of the Friends of Syria All Party Parliamentary Group, and broke with her party in abstaining in a vote on military action in Syria. She has worked with anti-hunger charity Oxfam, advised the wife of Gordon Brown, Sarah, on women’s and children’s health campaigns, and was heavily involved with the Labour Women’s Network.

Tributes poured in from across the British political spectrum. Labour Party leader Jeremy Corbyn described Cox as a person “dedicated to getting us to live up to our promises to support the developing world and strengthen human rights.”

U.K. Prime Minister David Cameron and Chancellor of the Exchequer George Osborne shared their condolences on Twitter. Cameron called her death a “tragedy,” sending condolences to her husband, Brendan Cox, and two children. He had previously announced that campaigning to remain in the E.U. would be suspended in light of the incident.

Vote Leave campaigner Boris Johnson said it was appalling that a minister “should lose her life simply doing her best for constituents.”

French Prime Minister Manuel Valls also tweeted, in French, the words “Sadness for Jo Cox and the British people. Through her, our democratic ideals have been targeted. Never accept it!”

In the U.S. Gabrielle Giffords, the former Arizona congresswoman who was herself seriously injured in a mass shooting during a constituent meeting, paid tribute:

Others outside of the world of politics reflected on the killing, which is without precedent in modern British politics: 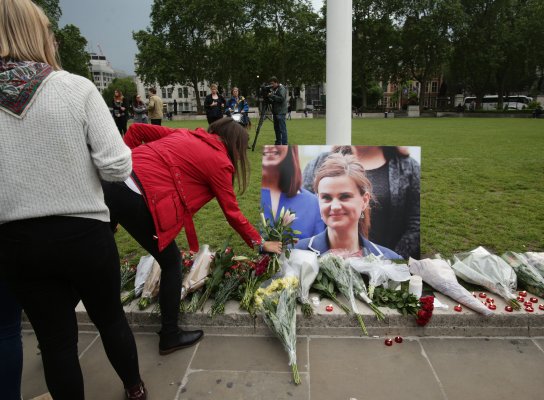 British Lawmaker Dies After Being Shot and Stabbed
Next Up: Editor's Pick