British member of parliament Jo Cox has died after being shot and stabbed multiple times during a meeting with constituents Thursday, days before Britons are due to cast ballots in a contentious referendum on whether to remain in the European Union. Cox was a vocal supporter of Britain remaining in the European Union.

Before embarking on a career in politics, Cox was head of policy with the humanitarian group Oxfam, a major anti-poverty organization worldwide. After graduating from Cambridge in 1995, Cox also worked for Save the Children, the National Society for the Prevention of Cruelty to Children, and as an advisor to the Freedom Fund, an anti-slavery group, reports the BBC.

The mother of two was married to Brendan Cox, also a humanitarian campaigner. On Thursday in the wake of the shooting, Brendan Cox posted a simple tweet including a photo of his wife with no accompanying text.

Cox isn’t the only MP to have been attacked in recent years but Cox is the first to have been assassinated while in office in a generation.

In May 2010, British MP Stephen Timms—like Cox, a member of the Labour Party—was stabbed twice by 21-year-old Roshanara Choudhry, a woman who said she wanted to punish Timms for his support of the Iraq War. Choudhry said later she was inspired by videos of Anwar al-Awlaki, the American citizen and Al-Qaeda member killed in a 2011 drone strike. Timms survived the attack and Choudhry was sentenced to a minimum of 15 years in prison.

Before that, in January 2000, Liberal Democrat MP Nigel Jones was attacked with a samurai sword by a Robert Ashman, a mentally ill man who believed the government was persecuting him. Jones survived with only lacerations on his hands but his assistant, Andrew Pennington, was killed in the attack.

All three were attacked during constituent “surgeries,” regular clinics where lawmakers meet the people they represent to hear their concerns in person. After the Timms stabbing, Harriet Harman, then acting leader of the Labour Party, suggested more should be done to protect MPs during such meetings.

“One of the great strengths of the British political system is the every day accessibility of MPs to their constituents but we can’t have a situation where MPs are at risk,” she said. “Parliament needs to consider how best to ensure MPs can carry out their responsibilities safely.”

Cox, 41, died Thursday afternoon after being shot and stabbed multiple times. A 52-year-old man whose name has not been confirmed by authorities has been arrested in connection with the attack.

Campaigning around so-called “Brexit” referendum has been suspended in the wake of the attack. 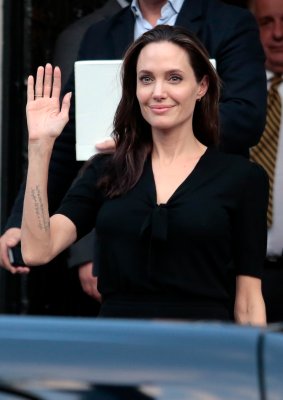 Angelina Jolie Pitt Has a New Job: Professor
Next Up: Editor's Pick