In the wake of the Orlando nightclub shooting, Donald Trump seemed to suggest that President Obama was somehow sympathetic to the suspected gunman, telling Fox News that there’s “something else going on” since his actions were not “tough” or “smart.”

Later, he told the Associated Press that Obama “continues to prioritize our enemy” over Americans. Finally, on Facebook and Twitter he posted comments that spelled out more clearly what he was suggesting: “Hillary Clinton received a classified intelligence report stating that the Obama administration was actively supporting Al Qaeda in Iraq, the terrorist group that became the Islamic State.”

But top military and Middle East experts, including vocal critics of the Obama Administration, condemned Trump’s suggestion as “ignorant,” “willfully ill-informed” and “ridiculous” in a half-dozen interviews with TIME. Several described it as a conspiracy theory.

As “evidence” for his claim, Trump linked to an article on the Trump-friendly conservative website Breitbart.com, which referenced a classified memo written by an intelligence source in August 2012 that was released last year.

The memo describes “the general situation” on the ground in Syria and notes that the terrorist group, al-Qaeda in Iraq, parts of which later joined ISIS, is one of the “major forces driving the insurgency in Syria.”

The Breitbart article then makes what Perry Cammack, an expert on the Middle East at the Carnegie Endowment for International Peace, calls a “logical leap of faith”: It claims that the memo proves that Obama administration, by providing assistance to Syrian rebels, “actively supported” what would become ISIS.

Trump’s social media posts suggest that the article and the memo amounts to a smoking gun. But experts say it’s all smoke and no fire.

More than a half-dozen top U.S. military, Middle East, and foreign policy experts who have worked for both Republican and Democratic administrations described Trump’s allegations as absurd.

“The U.S. has never tried to support ISIS. The U.S. had a common goal with ISIS in removing the Assad regime,” said Jon Alterman, a senior vice president at the Center for Strategic and International Studies. “The idea that Clinton or Obama cooperated with ISIS is insane. ”

He added that such an argument is the result “not a lack of understanding but a willful disregard that these are hard problems and have hard solutions.”

Aaron David Miller, a vice president at the Woodrow Wilson Center in Washington who has served as an adviser on the Middle East under both Republican and Democratic administrations, called Trump’s allegations “pure fantasy.”

Barry Pavel, a vice president at the Atlantic Council and former special assistant for defense policy to Presidents George W. Bush and Obama, called Trump’s statements “absurd and not credible,” adding that such allegations are “disturbing.”

“It’s incumbent upon those making these claims to show the evidence or be quiet,” he said.

Michael O’Hanlon, a senior fellow in Foreign Policy at the Brookings Institution, dismissed Trump’s insinuations as “hogwash.” “There are some issues where I might acknowledge Trump to have at least half a point,” he added,” but on this one he’s simply wrong.”

Several experts pointed out that there was no information in the classified memo that Breitbart posted that hasn’t been generally public knowledge for years.

Since shortly after the civil war in Syria began in March 2011, top military and foreign policy experts in the U.S. regularly—and publicly—referenced the complexity of opposition factions on the ground in Syria when debating whether the U.S. should intervene on behalf of moderate rebels.

It was well known by all parties that moderate rebels battling the regime of Syrian President Bashar al-Assad were joined by extremist groups linked to al-Qaeda and other Islamic extremist factions. The question was whether, and how, to aid a potential ally without inadvertently arming an enemy.

“You never have full knowledge. You can’t always choose angels as allies. Do we have unsavory allies in the Middle East? Yes,” said Alterman of CSIS. “But to then take the leap and say that amounts to cooperation with ISIS—absolutely not.”

Many Republican and Democratic officials, including Obama, expressed concern that U.S. support in the form of training and weapons shipments intended for moderate rebels would end up in extremists’ hands.

But others, including Clinton, U.S. Defense Secretary Leon Panetta, Chairman of the Joint Chiefs of Staff Martin Dempsey, and former CIA Director David Petraeus argued the U.S. had an obligation to support the moderate rebels and civilians, who stood very little chance against the well-armed Assad regime. New research indicates that more than 470,000 Syrians have been killed since the fighting began.

In 2012, top Republican leaders, including Republican Sens. John McCain of Arizona and Lindsey Graham of South Carolina, began urging the Obama administration to arm moderate Syrian rebels. “The Iranians and the Russians are providing Bashar Assad with weapons,” McCain said at the time. “People that are being massacred deserve to have the ability to defend themselves.”

Clinton has regularly acknowledged the dangers of arming rebels. “Wicked problems rarely have a right answer; in fact, part of what makes them wicked is that every option appears worse than the next. Increasingly that’s how Syria appeared,” Clinton later wrote in her memoir, adding that the “risks of both action and inaction were high.”

When the Obama administration eventually decided to arm and equip moderate Syrian rebels, the Pentagon focused on the difficult task of vetting recipients.

Critics of the Obama administration have argued for years that U.S. efforts to single out certain rebels for support may have inadvertently benefited other Islamic extremist groups, including al-Nusra, an al-Qaeda operation, but that was in no way a goal of the Administration.

Randa Slim, senior fellow at the Middle East Institute, told TIME that Trump’s suggestions that Clinton and Obama “actively supported” terrorist groups is “not borne out by any evidence on the ground.” If anything, she says, the criticism from Syria experts is often the opposite—that Obama was too focused on destroying ISIS, at the expense of supporting pro-democracy groups on the ground in Syria.

“There is a consensus among Syria watchers, even among critics of the Obama policy in the region, that Obama has been laser focused on dealing a mortal blow to ISIS,” she said.

The classified memo was obtained by the conservative group Judicial Watch using the Freedom of Information Act to request emails that Clinton sent and received during her time as a public official.

Miller of the Wilson Center, who has served for six secretaries of State since the 1980s, described Trump’s allegations as unprecedented.

“I have never seen a candidate either by omission or commission engage in such a willful and purposeful distortion of truth and reality,” he said. “The bottom line on these comments, and so many others, is that Mr. Trump is a man who really doesn’t know what he doesn’t know and he’s not in a hurry to find out.” 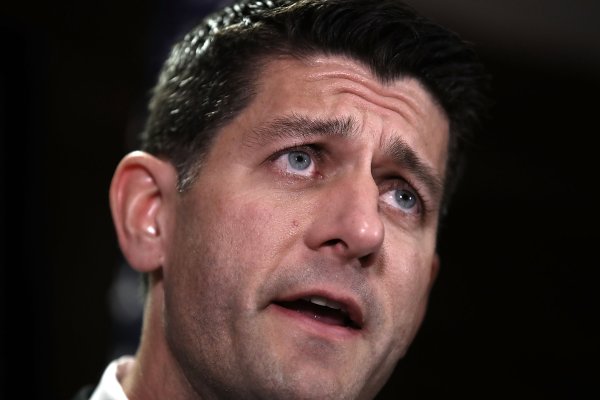 Speaker on Trump Comments: 'You Can't Make This Up Sometimes'
Next Up: Editor's Pick