Most of my VR experience so far has come in the form of single-player technical demos. While they’re immersive and sometimes fun, Star Trek: Bridge Crew has blown them all out of the water.

You begin the game on board the USS Aegis – the first of its class, apparently – and you play one of four roles: Tactical, Engineering, Helm and Captain. The twist is that the other three roles are also played by humans, all wearing VR headsets.

In the gameplay demo on show at Nvidia’s space at E3, I was thrust into a game with two strangers (whoever you are, I’m so very sorry) and an incredibly charismatic developer, who played the position of Captain. I chose to be at the helm, but missed the introductory video because my Oculus Rift headset wasn’t sitting correctly on my head. This may have been the reason behind our downfall.

Things were relatively straightforward to begin with, although since this was my first time using Oculus’ yet-to-be-released touch controllers, there was plenty to get used to.

With a few moments to breathe, I looked down at my hands – present and correct. I looked around. Everybody else was also looking at their hands in what appeared to be wonderment and awe; it was one of the funniest things I’ve ever seen.

With hand inspection out of the way, I turned my attention to the desk in front of me. I had a main screen, on which I could set coordinates, and a mini-map for spotting friends and foes. The ship is steered via touchscreen, with throttle controls visible on a second screen. Using my fake fingers to use the touchscreen was difficult to start with, and in truth it wasn’t something I ever fully became accustomed to.

Over the game’s built-in VoIP feature, I could vaguely hear the captain mention something about a huge piece of space debris, but I was only half-listening. Thunk. The Aegis had bumped off the side of it, but everyone had escaped unscathed.

Among the space debris were escape pods. We needed to get our ship close to the pods, deactivate our shields and beam escapees on-board. That was up to Engineering and Tactical; all I had to do was fly to the right spot. Naturally, this resulted in me spinning the ship around uncontrollably for a solid minute, before my team was able to do anything useful.

Finally, we were locked on and, one-by-one, beaming people aboard our ship. Alas, enemies appeared and began shooting threatening lasers at us. Engineering had to re-activate our shields, which meant we had to stop beaming and start shooting.

For a second time I spun the ship in the wrong direction (apologies, once again), much to the annoyance of everybody else. After some faffing, I pulled the ship into the correct position so my crewmates could begin shooting.

We sustained significant damage, and all around me I could see redshirts dying. One died right in front of the Bridge window, playing a guilt-inducing corpse for the rest of the demo. Our shields were down to below 20%. We had to get the hell out of there and jump to another, safer sector.

Whoosh. We narrowly escaped, with 12 of the 18 escape pod occupants on-board. Not an outright failure, but a good Captain never leaves anybody behind.

Star Trek: Bridge Crew demonstrates the potential for social VR very well. The game can be played by friends who are physically sat in separate rooms, but thanks to speedy voice chat and the hilarities of VR, they’re sharing an adventure in the same space.

Bridge Crew’s developers say they’re working on a proper campaign mode and randomised mission to increase the game’s replayability. You’ll also be able to play solo, with AI characters controlling the rest of the ship.

I’ve no idea whether the giddy highs and amusing lows of captaining a spaceship will have staying power in the games world, but if you can get four friends to buy VR kit and be online at the same time, Star Trek: Bridge Crew is a hoot. 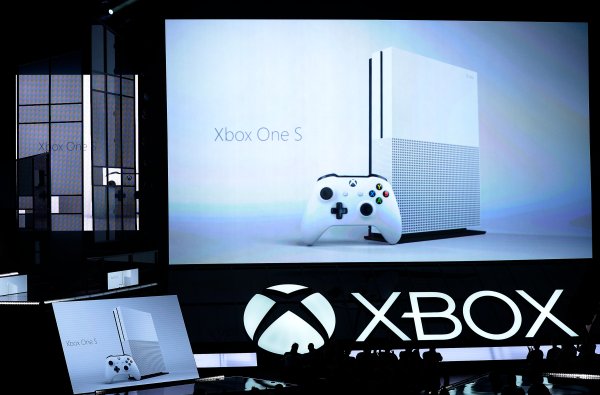 Microsoft's Gaming Chief On the Future of Xbox
Next Up: Editor's Pick