Japanese Defense Minister Gen Nakatani meets with reporters in Tokyo on June 15, 2016, at his ministry after a Chinese naval ship briefly entered Japan's territorial waters off the southwestern island of Kuchinoerabu
Kyodo—Kyodo
By Casey Quackenbush

Japan says it spotted a Chinese reconnaissance ship sailing through its territorial waters on Wednesday at around 3:30 am local time.

The Japan Times reports that the vessel was seen near Kuchinoerabu Island at the edge of the East China Sea, and authorities say it is China’s second naval infiltration since World War II.

Less than a week ago, a Chinese naval frigate was also seen in waters off the Senkaku Islands. Known in Chinese as the Diaoyu Islands, they are also claimed by China and Taiwan.

“China has long been claiming the Senkaku Islands, sending its patrol ships into the contiguous waters,” Foreign Minister Fumio Kishida told the press Wednesday. “The Chinese ship entered the territorial waters this time, but we are evaluating what this Chinese action means in the context of international law.”

The incident comes against the background of China’s increasingly aggressive claims to large parts of the South China Sea, where tensions have skyrocketed with both the U.S. and Southeast Asian countries over maritime borders. 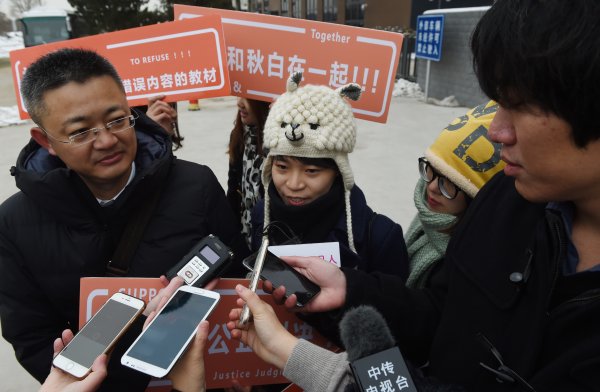 Chinese Woman Sues Over Textbooks Calling Homosexuality a 'Disorder'
Next Up: Editor's Pick