Jars of Vegemite are seen during a press call to celebrate the Vegemite brand's 90th year at the Vegemite factory in Melbourne on Oct. 24, 2013
Graham Denholm—Getty Images
By Nash Jenkins

Thursday is National Vegemite Day. This probably means little to the reader outside of Australia, the only place where the sticky, bitter condiment has ever been popular, but no worries — the Australians have, shall we say, overcompensated for your disinterest.

Condiments have always been curious cultural markers — the British have their malt vinegar and the Belgians their mayo on frites — but the Australian relationship with Vegemite is something else. “Reverence” is the aptest way to describe it. Case in point: if you searched the hashtag #NationalVegemiteDay on Twitter on Thursday, you would be greeted by thousands of tributes to the stuff that ranged from endearing to bizarre — from appreciative snapshots of Vegemite sandwiches to vaguely scatological portraits that used the tarry paste as their medium. The condiment receives a prominent shout-out in Men at Work’s sensational 1981 single “Down Under,” which the Australians have embraced as a de facto patriotic anthem. The Vegemite jingle, sung by chipper Australian children — “we’re happy little Vegemites, as bright as bright can be …” — is as entrenched in the Australian brain as the Oscar Mayer Weiner jingle is in the American.

A whole squad of academics, Australian and not, have devoted their research efforts to examining the condiment’s persisting cultural stature. Robert White, a researcher at the University of Western Australia, has observed that expatriate Australians can go through what they think is quite legitimate Vegemite withdrawal. “Vegemite is one of the clearest markers of cultural identity that has yet been reported,” the American psychologists Paul Rozin and Michael Siegal observed in a paper published in 2003, “and early exposure is an important, though not necessary, condition for acquiring a taste for it.”

To the untrained (i.e. non-Australian) palette, it is not bad, per se — just inordinately salty. It’s usually eaten on crackers, or on toast; in the case of the latter, a thin spread of butter between the bread and the Vegemite will cut the Vegemite’s sharpness. Still, most non-Aussies recoil when they taste it, which has become as much of a meme as the condiment itself. Early last year, Pizza Hut’s Australian operation marketed a new cheese-and-Vegemite-stuffed crust by filming foreign tourists trying (and viscerally hating) the pizza. The ad went viral among Australians, who took a perverse pride in just how much their beloved staple upset everyone else. Search YouTube for “Vegemite” and the first page of results is videos in the same vein (one features Oprah Winfrey sampling it onstage with Hugh Jackman in Sydney; she was a good sport).

We can trace Vegemite’s origins to late-19th-century Germany, where a scientist named Justus von Liebig discovered that brewer’s yeast could be concentrated and eaten. (Von Liebig, who could be called Germany’s George Washington Carver, is famous for being both the “father of the fertilizer industry” and the inventor of the beef-bouillon cube.) The resulting product was a dense, sticky paste, and by the early 1900s, it was being manufactured in the U.K. as Marmite, using leftover yeast waste from Bass’ nearby brewery.

The stuff caught on quickly in Australia, a British Commonwealth, so much so that when World War I disrupted the flow of imports from the U.K., Australian scientists scrambled to craft a convincing substitute. A chemist named Cyril Callister came up with the most potable alternative in 1923; after a public competition to name it, the name “Vegemite” was pulled out of a hat.

Its popularity was bolstered by the Cold War–era fascination with vitamins and other nutritional supplements; Vegemite advertised itself as rich in both. But in more recent years, its biggest selling factor has simply been its assumed status as a staple of the Australian pantry. “It’s never taken off anywhere else,” Michael Symons, an Australian food historian, told TIME in an email. “But its continued popularity [in Australia] … is presumably [because] each generation has inducted the next.”

There was a period earlier this decade when Kraft Foods (which owns Vegemite) was worried about how the brand would appeal to a new generation of consumers. The hype around National Vegemite Day, which has largely been driven by the company’s social-media accounts, may not be much more than a clever marketing scheme. But the raw data suggests that there isn’t much to worry about. Nearly half of the Australian population has eaten Vegemite in the past week, according to statistical averages; the Wall Street Journal reports that there’s a jar in the pantry of 8 out of every 10 Australian homes.

“I don’t often spread it on my toast, but I happen to have done so yesterday,” Symons said. “Still like it.” 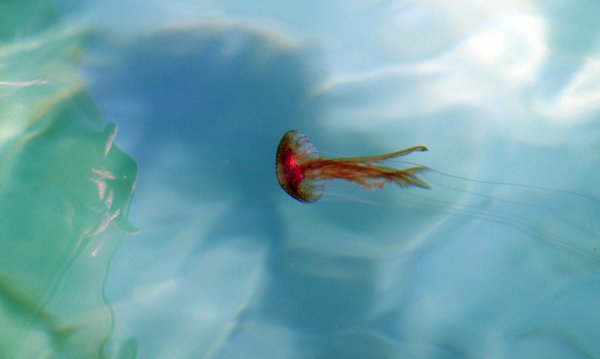 'Unique and Rare' Photograph Shows Fish Swimming Inside Jellyfish
Next Up: Editor's Pick