Congress Members Read the Anonymous Stanford Sexual-Assault Letter, and It Was Powerful

In their suits and pearls, members of Congress stood on the House floor and staged a public reading for a full hour Wednesday night. Their material was the viral letter penned by Anonymous, the woman who was sexually assaulted on the Stanford University campus last year. She had read the same letter to her attacker, Brock Turner, in court — describing what that night, the ensuing legal battle, and the fact that he was sentenced to only six months in prison, had done to her.

The reading began just before 8 p.m. Wednesday local time. The 19 members who participated in the reading did not introduce themselves as they cycled up to the microphone, for fear it would distract from the content of the letter. The result was that they seemed rather anonymous too, echoing a message that has taken on significance for women and men far beyond its author.

Many readers were women from the California delegation, but the group was female and male, Republican and Democrat. As they worked through the 7,200 words, the hallowed stage and the elegant attire starkly underscored the pained, graphic words that were being read.

Congress members read descriptions of the victim being violated half-naked behind a dumpster, waking up confused on a hospital gurney, finding pine needles in her vagina, being told that she liked being penetrated by a foreign object, not being able to sleep in the dark anymore, and being grilled by attorneys who wanted her to do nothing more than slip up. Many read loudly, trying to channel the disbelief and anger of the author. Others sat behind, listening, with hands covering their mouths.

Read More: Why We Can’t Call Brock Turner a ‘Rapist’

The reading was organized by California Representative Jackie Speier, who represents the area around Palo Alto, where Stanford is located. She began reading the 12-page letter, and introduced it:

“We are doing something tonight that’s never been done before on the House floor, we will read the entire gut-wrenching statement of a sexual-assault survivor who was attacked on the Stanford campus last year,” she said. “Emily Doe is a survivor in every sense of the word and her words deserved to be amplified.” She said the members were not moved by Brock Turner’s “excuse of alcohol,” nor his fathers reasoning that his son’s life shouldn’t be derailed “for 20 minutes of action.”

The whole letter can be read here, on the Buzzfeed site where it was first publicly posted.

Here are excerpts of what each participating member read.

Representative Jackie Speier (D., Calif.): “You don’t know me, but you’ve been inside me, and that’s why we’re here today … I decided it was my only night with [my sister], I had nothing better to do, so why not, there’s a dumb party ten minutes from my house.”

Representative Katherine Clark (D., Mass.): “The next thing I remember I was in a gurney in a hallway … A deputy explained I had been assaulted. I still remained calm, assured he was speaking to the wrong person … When I was finally allowed to use the restroom, I pulled down the hospital pants they had given me, went to pull down my underwear, and felt nothing.”

Representative David Cicilline (D., R.I.): “On that morning, all that I was told was that I had been found behind a dumpster, potentially penetrated by a stranger, and that I should get retested for HIV because results don’t always show up immediately.”

Representative Niki Tsongas (D., Mass.): “One day, I was at work, scrolling through the news on my phone, and came across an article. In it, I read and learned for the first time about how I was found unconscious, with my hair disheveled, long necklace wrapped around my neck, bra pulled out of my dress, dress pulled off over my shoulders and pulled up above my waist, that I was butt naked all the way down to my boots, legs spread apart, and had been penetrated by a foreign object by someone I did not recognize.”

Representative Maxine Waters (D., Calif.): “In the next paragraph, I read something that I will never forgive; I read that according to him, I liked it. I liked it. Again, I do not have words for these feelings.”

Representative Bonnie Watson Coleman (D., N.J.): “Sometimes I think, if I hadn’t gone, then this never would’ve happened. But then I realized, it would have happened, just to somebody else. You were about to enter four years of access to drunk girls and parties, and if this is the foot you started off on, then it is right you did not continue.”

Representative Judy Chu (D., Calif.): “When I was told to be prepared in case we didn’t win, I said, I can’t prepare for that. He was guilty the minute I woke up. No one can talk me out of the hurt he caused me. Worst of all, I was warned, because he now knows you don’t remember, he is going to get to write the script.”

Representative Mark Takano (D., Calif.): “Future reference, if you are confused about whether a girl can consent, see if she can speak an entire sentence. You couldn’t even do that. Just one coherent string of words. Where was the confusion? This is common sense, human decency.”

Representative Debbie Dingell (D., Mich.): “I don’t sleep when I think about the way it could have gone if the two guys had never come. What would have happened to me? That’s what you’ll never have a good answer for, that’s what you can’t explain even after a year. On top of all this, he claimed that I orgasmed after one minute of digital penetration. The nurse said there had been abrasions, lacerations, and dirt in my genitalia. Was that before or after I came?”

Representative Marcy Kaptur (D., Ohio): “He has done irreversible damage to me and my family during the trial and we have sat silently, listening to him shape the evening. But in the end, his unsupported statements and his attorney’s twisted logic fooled no one. The truth won, the truth spoke for itself. You are guilty.”

Representative Tulsi Gabbard (D., Hawaii): “Again, you were not wrong for drinking. Everyone around you was not sexually assaulting me. You were wrong for doing what nobody else was doing, which was pushing your erect dick in your pants against my naked, defenseless body.”

Representative Ted Poe (R., Texas): “You knocked down both our towers, I collapsed at the same time you did. If you think I was spared, came out unscathed, that today I ride off into sunset, while you suffer the greatest blow, you are mistaken. Nobody wins.”

Representative Eric Swalwell (D., Calif.): “The damage is done, no one can undo it. And now we both have a choice. We can let this destroy us, I can remain angry and hurt and you can be in denial, or we can face it head on … Your life is not over, you have decades of years ahead to rewrite your story … But right now, you do not get to shrug your shoulders and be confused anymore … You have been convicted of violating me, intentionally, forcibly, sexually, with malicious intent, and all you can admit to is consuming alcohol.”

Representative Loretta Sanchez (D., Calif.): “My life has been on hold for over a year, a year of anger, anguish and uncertainty, until a jury of my peers rendered a judgment that validated the injustices I had endured. Had Brock admitted guilt and remorse and offered to settle early on, I would have considered a lighter sentence … Instead he took the risk of going to trial, added insult to injury and forced me to relive the hurt as details about my personal life and sexual assault were brutally dissected before the public.”

Representative Susan Davis (D., Calif.): “Someone who cannot take full accountability for his actions does not deserve a mitigating sentence. It is deeply offensive that he would try and dilute rape with a suggestion of ‘promiscuity.’ By definition rape is the absence of promiscuity, rape is the absence of consent, and it perturbs me deeply that he can’t even see that distinction.”

Representative Paul Gosar (R., Ariz.): “The probation officer weighed the fact that he has surrendered a hard earned swimming scholarship. How fast Brock swims does not lessen the severity of what happened to me, and should not lessen the severity of his punishment. If a first time offender from an underprivileged background was accused of three felonies and displayed no accountability for his actions other than drinking, what would his sentence be?”

Representative Ann McLane Kuster (D., N.H.): “The Probation Officer has stated that this case, when compared to other crimes of similar nature, may be considered less serious due to the defendant’s level of intoxication. It felt serious. That’s all I’m going to say.” 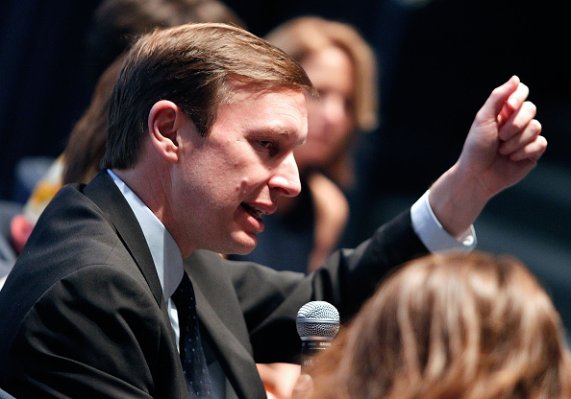 Democratic Senators Filibuster for Gun Control
Next Up: Editor's Pick