How Connecticut Politicians Are Leading the Fight on Gun Control

Connecticut’s two Senators tag-teamed on a filibuster Wednesday to push for votes on two gun control measures. A representative made national news when he boycotted a moment of silence over the Orlando shooting, arguing it was a time for action and not prayers. And the state’s governor has said he’ll try to use his executive authority to bar people on the terrorist watch list from buying guns.

It’s no coincidence that Connecticut’s politicians, all Democrats, are leading the fight for gun control in the wake of the deadliest mass shooting in U.S. history. The third-worst shooting took place in their state in 2012 at Sandy Hook Elementary School in Newtown.

But the way they are making their arguments is also notable. Connecticut’s pro-gun control lawmakers tend to use strong, visceral language, framing their cause as a moral fight.

Sen. Chris Murphy issued a widely quoted statement after the Orlando shooting saying that “Congress has become complicit in these murders by its total, unconscionable deafening silence.” Sen. Richard Blumenthal said he didn’t know “how someone can vote against taking guns away from people on the terror watch list and look at themselves in the mirror.” And Rep. Jim Himes wrote in the Washington Post that if the House of Representatives “had a solitary moral fiber, even a wisp of human empathy,” it would pass legislation instead of holding a moment of silence.

“We’re clearly not going to win on the facts of the case,” Himes told TIME. “So I think we need to start calling people out in more moral language.”

That emotional tone could help “break through a lot of the noise,” said Shannon Watts, the founder of Moms Demand Action for Gun Sense in America, a pro-gun control group based in Connecticut.

“(Murphy) is always saying things like, ‘Congress is culpable for murder,’” Watts said. “Those things are so incredibly powerful that they help with the national conversation.”

Watts founded Moms Demand Action in the wake of Sandy Hook, and the organization now has 3 million members in 50 states, working as the grassroots arm of Everytown for Gun Safety. She said Connecticut was the first state to see a sweep in its grassroots on the issue.

Ron Pinciaro saw it too. The executive director of Connecticut Against Gun Violence said his membership grew from 8,000 to 30,000 in a few months following the Newtown shooting. He believes that grassroots “organic, visceral response” continues to resonate with Connecticut’s leaders today.

“To have moments of silence for victims and not to protect future victims makes no sense at all,” Gov. Dan Malloy told TIME. Failure of gun control measures in Washington, D.C. “is discouraging, but Connecticut will continue to play a lead role in trying to make people safer.”

Following the legislative success in Connecticut, gun control advocates have consistently pushed a simple message at the national level: gun reform that succeeded in this small blue state can work nationally.

In the meantime, the frequent moral attack on pro-gun politicians by Connecticut’s congressional delegation and state leaders will continue. And yesterday, Blumenthal told TIME his moral argument is for not just Connecticut voters, but residents of other states whose elected officials oppose gun control legislation.

“It evokes deep moral outrage that Congress has been so complicit by its inaction in the continuing violence,” Blumenthal said. “The condemnation of Congress is very personal and moral.” 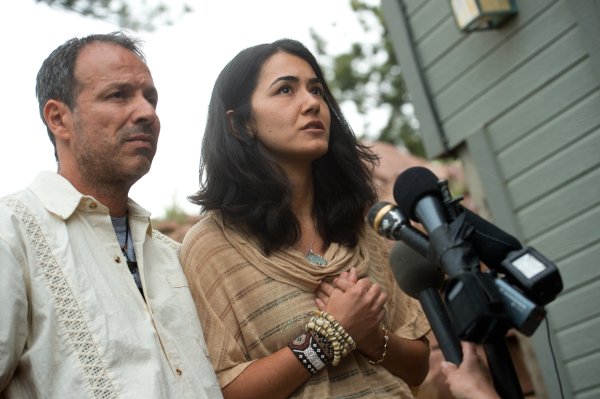 Ex-Wife Says Orlando Shooter Might Have Been Hiding Homosexuality From His Family
Next Up: Editor's Pick