These 5 Facts Explain How the Orlando Shooting Has Polarized the U.S.

The slaughter in Orlando marked the 136th shooting in the U.S. this year involving at least four victims killed or wounded. Aside from the sheer scale of the horror, Orlando also stands out for touching on so many hot-button issues at once: immigration, terrorism, gay rights and gun control. Here are five facts to put this tragedy in context.
(CNN)

1. Growing Radicalization Threat
At the moment, it appears that Orlando shooter Omar Mateen had no direct contact with ISIS. It’s reassuring that ISIS did not orchestrate this attack, but it’s worrying because ISIS was again able to partially inspire someone thousands of miles away to commit mass murder, boosting its international brand even as the terror continues to lose ground in its home territory.

Read More: The Tale of Two Killers in Orlando and France Shows How ISIS Operates Today

ISIS has been linked to at least 90 attacks around the world since its rise in 2014, killing more than 1,200 people. By my calculation, about a quarter of these assaults have been ISIS-inspired—like Orlando—rather than ISIS-directed, like the November attacks in Parks. These lone-wolf attacks may well become more popular because ISIS has refocused its propaganda campaign. As Turkey and other combatants in Syria have made it more difficult for ISIS recruits to reach the battlefield, the group has begun calling on supporters to stay home and commit terror acts in their own communities.
(New York Times)

2. Muslim Immigration
ISIS recognizes that one of its tactical strengths is the ability to use terrorism to implicate entire Muslim communities. We’ve seen this in Europe, where a fake Syrian passport was likely planted on one of the Paris attackers last November. The discovery helped anti-immigration Europeans score political points in the battle over the resettlement of Muslim Syrian refugees on the continent. This plays into the hands of ISIS, whose “Islam vs. the West” narrative is an essential propaganda and recruiting tool.

The trend is now obvious in the United States. A day after the Orlando attack, Donald Trump tried to use Mateen—who was born in the same New York City borough Trump was—as justification for temporarily banning Muslims from the country. But Muslim immigrants account for just 10% of all legal immigrants coming to the U.S.. That percentage is much smaller if we include illegal immigrants (surely Trump would). About 2,800 Syrian refugees have so far been resettled in the United States. The number of those Syrian refugees implicated in terror attacks? Zero.
(Pew Research Center, New York Times)

Read More: Kareem Abdul-Jabbar: Trump and ISIS Depend on Irrationality

3. LGBT Rights
The Orlando attack must be the most brutal act of anti-gay violence in American history. Given the strides made by the LGBT community in recent years, an entire generation of millennials have grown up in a society where, for many Americans, sexual orientation is no more a defining characteristic than skin color or religion.

Yet the Orlando shooting is a cruel reminder that homophobia remains a big problem. In a 2011 analysis, the Southern Poverty Law Center found that LGBT people accounted for 2.1 percent of the U.S. population but were the target of 17.4 percent of violent hate crimes. That means LGBT people are 2.6 times more likely to be violently attacked than black people, and 41.5 times more likely than whites. Unfortunately, the terrorism angle will make it much more difficult to use the Orlando murders to open a debate on this subject.
(Southern Poverty Law Center)

4. Gun Violence
The Orlando shooting has shown again how divided the country is on gun control. While the U.S. makes up just 4.4 percent of the global population, it’s home to 42 percent of the world’s civilian-owned guns. The American Journal of Medicine recently published a report comparing the U.S. to fellow high-income OECD members; the U.S. has a gun homicide rate that’s 25 times higher, on average.

Gun ownership is part of America’s culture, but the use of a powerful assault weapon has again raised questions about which guns are simply too dangerous to be sold to the general public—to say nothing of sales to people, like Mateen, who have appeared on terrorist “watch lists.” Unfortunately, it’s not clear that this debate will advance, even though a new poll from CBS News finds that the percentage of Americans who favor a ban on assault weapons has jumped from 44 percent in December to 57 percent today. Republican Senator Rob Portman, up for re-election in Ohio, has said he’s open to debate on a ban. But we’ve seen these gun control movements lose momentum many times before, and here again, the terrorism angle will make it more difficult to focus the debate on guns.
(Vox, American Journal of Medicine, CBS News)

Read More: Everything We Know About the Paris Knife Attacker Inspired By ISIS

5. Growing Polarization
All of these debates reflect the increased political entrenchment in American society. For the past half decade or so, individual instances of mass shootings haven’t brought the country closer to reaching a consensus on gun control. Given the current status quo and frequency of these mass shootings, that’s untenable.

And yet it’s not likely to change soon. From 1994 to 2014, the number of Republicans who have “very” unfavorable views of Democrats has increased from 17 percent to 43 percent. That figure for Democrats has gone from 16 percent to 38 percent over the same 20-year span. 36 percent of Republicans and Republican-inclined voters say Democratic policies “threaten” the well-being of the nation; 27 percent of Democrats and Democratic-inclined voters say the same thing about their GOP counterparts. At a time when the country needs an honest and open debate on the very real threats of Islamic radicalization, mass violence and homophobia, more than 80 percent of the country has little interest in better understanding the other side’s point of view. That just further compounds tragedies like Orlando.
(Pew Research Center) 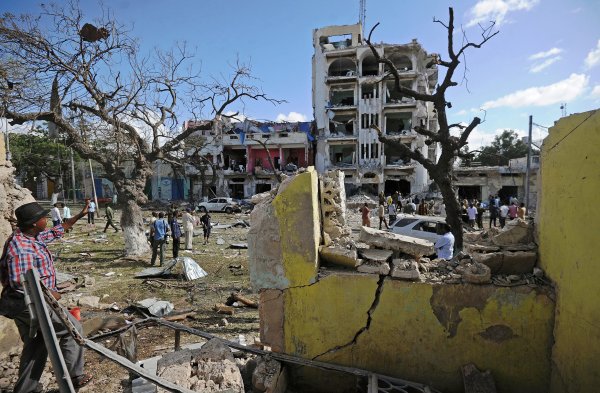 We Must Choose to Not Live in Terror
Next Up: Editor's Pick