Investigators work the scene following a mass shooting at the Pulse gay nightclub in Orlando, Fla., on June 12, 2016.
Carlo Allegri—Reuters
By Jared Malsin/Istanbul

One was an American private security guard with a history of domestic violence and no known criminal record. The other was a French ex-convict who had served two and half years in prison on a terrorism recruitment charge. But the propaganda arm of ISIS claimed both men—Omar Mateen and Laruossi Abballa—as “soldiers” after they committed murder in their respective countries.

The divergent profiles of the people claiming to kill in the name of ISIS underscores how the group embraces a broad spectrum of potential foot soldiers, whether or not they have prior contact with the group or a deep commitment to its ideology.

Read More: Kareem Abdul-Jabbar: Trump and ISIS Depend on Irrationality

An undated photo of Omar Mateen, identified as the gunman in mass shooting at a gay club in Orlando, Fla., released on June 12, 2016.
Handout/Reuters

Omar Mateen, the gunman who killed 49 people at a gay club in Orlando on Sunday, falls into the category of attackers acting in ISIS’ name without any known operational ties to the group. Other attackers, like Abballa, who stabbed two police officers to death in their home outside of Paris on Tuesday, follow a more familiar path to a jihadi-inspired attack, one that included personal contact with other would-be militants and time served in a Western prison system.

As information continues to surface, a more complex picture of Mateen’s motivations has emerged. Bar patrons said Mateen had frequented the Pulse nightclub before his attack. His ex-wife says he may in fact have even been gay. These descriptions of Mateen as a man who drank alcohol and may have struggled with his sexuality provide an awkward counterpoint to ISIS’ efforts to claim the shooter as a “soldier” of its puritanical caliphate—and the efforts of some in the U.S. to claim that Orlando was an ISIS attack.

Read More: Everything We Know About the Paris Knife Attacker Inspired By ISIS

Nevertheless, ISIS has endorsed both Orlando and the double murder near Paris through their official media arm. There’s a good reason for that—ISIS is losing ground in Iraq, Syria, Libya, and Iraq, and analysts say it is seeking to reverse an image of decline and defeat by claiming spectacular acts of violence, even if the group had little to nothing to do with them.

“It’s just an open casting call for anyone who wants to perpetrate violence,” says Clint Watts, a former FBI counterterrorism agent and a fellow at the Foreign Policy Research Institute in Philadelphia. “They’re desperate for success, but it works when there are people willing to do it.”

Two days after the massacre in Orlando, Florida, 25-year-old Laruossi Abballa stabbed to death an off duty police captain and his partner, also a police official, at their suburban home in the town of Magnanville, outside of Paris. He then sat down and broadcast a live video on Facebook in which he proclaimed his allegiance with ISIS. The couple’s three-year-old son sat behind him. According to news reports, Abballa gestured at the child. “I don’t know what to do with him,” he said.

Read More: What to Know About ISIS’s Role in the Orlando Shooting

A photo taken off Facebook shows an undated photo of Larossi Abballa, 25, who stabbed a policeman repeatedly outside the latter's home in Magnanville, a northwestern suburb of Paris on June 14, 2016.
AFP/Getty Images

Like Mateen, Abballa had also announced his support for ISIS at the last possible moment, speaking into his phone at 8:52 p.m. local time, shortly before he was killed by police special forces responding to the attack. Abballa’s message appears to have been very specific. He said he was responding to an appeal for attacks issued in May by ISIS spokesman Abu Muhammad al-Adnani.

Abballa was one of a group of men jailed in 2013 as a part of a plot to send militant recruits to Pakistan. At the time of his trial, he was quoted in Le Monde saying that his interest in militancy began when he was unemployed and lacking direction in life. “I needed recognition,” he said. He began to spend time with a group of men who spoke of jihad constantly. His former girlfriend told French radio that he became even more religious following his release from prison.

Abballa’s story is similar to past French attackers, including those who attacked the offices of the satirical magazine Charlie Hebdo in January 2015. He was an alienated man, jailed a young age and hardened in prison. He was well known to French police, but that doesn’t mean they were able to keep close track of him. Hundreds of young French citizens have traveled to Syria and Iraq to join militant groups including ISIS, and many have returned. “France has a jihadi problem,” says Ali Soufan, a former top terrorism investigator for the FBI.

The details of Omar Mateen’s phone call with 911 in which he reportedly declared allegiance to ISIS have not been released to the public. But other details suggest he had only a superficial knowledge of ISIS and what it stood for. Law enforcement officials say he had previously espoused admiration for al-Qaeda and Hezbollah, even though the latter—a Shi’a militant group based in Lebanon—is actively fighting ISIS in Syria.

But ISIS’ willingness to extend its brand to such a loose range of attacks is emblematic of its confused strategy for external operations. “Yes it helps them in terms of their propaganda value, but as part of a strategy it starts to fall apart,” says Watts. “I don’t know that on the investigative side, when you focus so heavily on the ISIS nexus, that it really helps you in terms of case-building or expanding things out.”

In his audio recording in May, Adnani, the ISIS spokesman, specifically called for attacks in Europe and the U.S., appealing to potential recruits who might otherwise travel to join ISIS in Iraq and Syria. He appears to have thrown open the door to any would-be attacker. That approach is part of a new era of transnational jihadism, one that embraces so-called “lone wolf” attackers. It is also a departure from an older model, which placed more emphasis on central control and the planning of more elaborate operations, like the 9/11 attacks. In letters that became public after his killing, Osama bin Laden cautioned against the use of solo attackers, and fretted over extending the al-Qaeda brand to less disciplined groups. But even Bin Laden’s chosen successor Ayman al-Zawahiri issued a call for lone attackers last year.

Soufan points out that that ISIS’ current laissez-faire attitude toward solo attackers is actually a reversal for the group, which previously distinguished itself from al-Qaeda by establishing a true state in the territory it occupied in Iraq and Syria, something bin Laden’s group could never do. “They are trying to do exactly what they criticized al-Qaeda for, which is going back to being a terrorist organization, an underground terrorism organization,” he says. 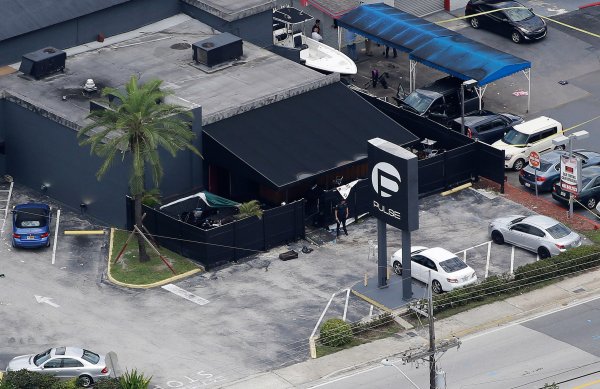