President Obama’s Wednesday meeting with the Dalai Lama in Washington ruffled a few feathers in China — around 1.3 billion to be exact, according to China’s Foreign Ministry spokesperson Lu Kang. The 80-year-old exiled Tibetan leader and global icon is seen as a dangerous separatist by Beijing, one is perceived as a threat to China’s sovereignty.

During a press briefing on June 14, Lu said of the upcoming White House meeting: “Under the cloak of religion, the 14th Dalai Lama peddles his political ambitions of dividing China all around the world. We ask all countries and governments not to give him any room to carry out such campaigns, even less risking arousing the firm opposition from the 1.3 billion Chinese people.”

While it is unknown what was discussed at the White House meeting — which U.S. officials called personal — the Dalai Lama has over the years crossed the globe meeting with a variety of state leaders, billionaires and celebrities. Speaking to TIME in 2014, the Dalai Lama explained that all he wants is compromise with China. “We are not seeking independence,” he said. “We are seeking general autonomy.”

Chinese officials are unconvinced, calling the exiled spiritual leader a “wolf in monk’s robes” who seeks to separate Tibet from China. Beijing says its sovereignty over Tibet goes back centuries, but Tibetans disagree. “Beijing has a very narrow view of what the Dalai Lama is, and they see him as someone who wants to split China apart,” says William Callahan, professor of international relations at the London School of Economics. “The logic is whenever any foreign leader meets with the Dalai Lama they are therefore supporting separatism.”

Read More: A Conversation With the Dalai Lama

The same year the People’s Liberation Army took control of Tibet in 1950, the Dalai Lama officially became head of state at the age 15. He met Chairman Mao Zedong while negotiating for Tibetan autonomy, but was eventually forced to flee Tibet to northern India with his cabinet in 1959.

The antipathy toward the Dalai Lama may have its roots in Chinese grievances that actually have little to do with Tibet. According to Callahan, Beijing’s stance on Tibet is tied in with “very deep feelings … of a ‘century of humiliation’” — a period in the 19th and 20th centuries where China lost control of its territory to Western and Japanese imperialists. According to this Chinese Communist Party founding narrative, that century ended when Mao established the People’s Republic of China in 1939. Even though the rest of the world — especially the Western world — views the Dalai Lama as a benign religious and cultural icon, Callahan believes that Chinese officials will continue to regard him as a political figure seeking to undermine their legitimacy.

“In a sense it is a sign of insecurity,” says Kerry Brown, professor of Chinese studies and director of the Lau China Institute at King’s College in London. “They are uneasy to questions about the rights of their control” and are “willing to throw diplomatic capital” over meetings that are actually of little geopolitical significance, like today’s encounter in the White House. Brown notes that in recent years Western leaders, apart from the U.S., have mostly stopped meeting with the Dalai Lama, largely over fears of negative diplomatic repercussions with Beijing. In 2012, U.K. Prime Minister David Cameron’s meeting with the Dalai Lama was strongly condemned by the Chinese. “They didn’t get ministerial visits from China for a year,” says Brown.

This is the fourth time Obama has hosted the Tibetan-Buddhist monk. It is important to note that their meeting was conducted in the Map Room, not the Oval Office, which is traditionally used for meetings with heads of states. Obama also limited the fallout with China by holding the meeting behind closed doors and out of the public eye. China’s anger may in part be bluster, but it looks like even America is listening. 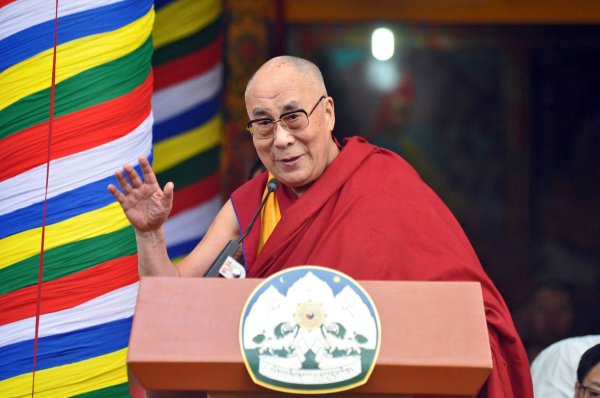 The Dalai Lama Will Speak at the Glastonbury Festival
Next Up: Editor's Pick