Tucked in the middle of Apple’s WWDC presentation this week was a series of updates meant to bolster Apple’s smart home efforts, which revolve around software called HomeKit. But over the past year, a triad of market forces — Apple’s goals, competition from rivals like Amazon and Google, and consumers’ needs — have been pushing the smart home around like a Ouija’s planchette. So what is the future for the smart home? As with the Ouija, the answer may depend on who pushes the hardest.

Apple’s biggest announcement around smart home technology was the unveiling of a new “Home” app, to be included in a forthcoming iPhone update. A control center linking together all of a user’s HomeKit-compatible devices, Home’s capabilities had previously been sprinkled around between the iOS Settings screen and individual device’s apps.

That approach was anything but smart. Imagine, for example, that you bought two different kinds of HomeKit-compatible smart lightbulbs for your living room. Outside of using Siri (more on that later), you would have to use two different apps to turn your lights on or off. Two apps, one unnecessary complication. Also: Some of the apps were dreadful.

But Apple’s new Home app should let you turn down your thermostat in the same place you turn on your lights. It’s a step in the right direction, especially when programming what Apple calls “scenes,” or favorite settings for given devices and given situations. (Dimming the lights for movie night, say.) In fact, it’s remarkable people like me tried to embrace the smart home before a solution like this existed.

One caveat: The new Home app looks like it relies heavily on Apple’s pressure-sensitive 3D Touch technology for its user interface. That feature is only found on newer iPhones, so owners of older models may want to prepare for more frustration. This design choice may give a tactile feel to the processes of turning up and down the heat, but it may also turn off smart home owners, because the $649 upgrade cost is a steep price to pay for what is effectively a light switch. Of course, it’s entirely possible that Apple will engineer ways for older phones to play house.

Still, anyone with an iPhone can use Apple’s Siri voice assistant to control HomeKit-compatible gear. This is where Apple has wisely planted its smart home flag. According to a recent voice assistant study by MindMeld, 45% of surveyed users just started using interfaces like Siri in the past year, and 43% use them at home the most. Apple figures that people carry their phones around with them wherever they go, and the voice assistant’s “Hey Siri,” command is suitable for triggering home devices.

But as a regular Siri user and smart home owner, my experience has not proven this true. Sometimes my iPhone doesn’t recognize my “Hey Siri” calls — and it’s not a microphone problem, it’s a software one. (If I wake the phone with the sleep/wake button, it suddenly starts to hear me.) Also, the iPhone’s ears have proven an ill match for the Amazon Echo’s seven mic array. The smart speaker’s microphones seem to hear me even if I just think of calling Echo’s name, all while playing blaring rock music.

That said, Apple has a Trojan Horse in the battle over the smart home: Apple TV. The new Apple TV’s Siri Remote will soon also be able to interact with HomeKit devices, so you’ll be able to use your clicker to turn your gear on or off. Looking ahead, it’s going to be a bloody battle for smart home dominance between these two devices this holiday season. (Google, too, recently announced an Echo-like device called Google Home.) Apple TV starts at $149, and Amazon Echo currently costs $179. There will be sales.

Another thing Echo has going for it is that its open ecosystem encourages development. That means any gadget you buy could possibly be supported by Alexa. By comparison, Apple’s HomeKit has required developers to install made-for-iOS chips in their products. The result is a safer, more secure device (which homeowners love, of course), but component delays have made it harder to get third-party, Apple-compatible gadgets on store shelves.

Apple’s relaunch of HomeKit seems to acknowledge that those manufacturing bottlenecks are coming to an end. Now that more products are coming to market, Apple is intent getting the smart home right. Will it happen? Only a few minutes of the WWDC keynote’s two-hour presentation touched on HomeKit. So, I’m not leaving the light on for it. 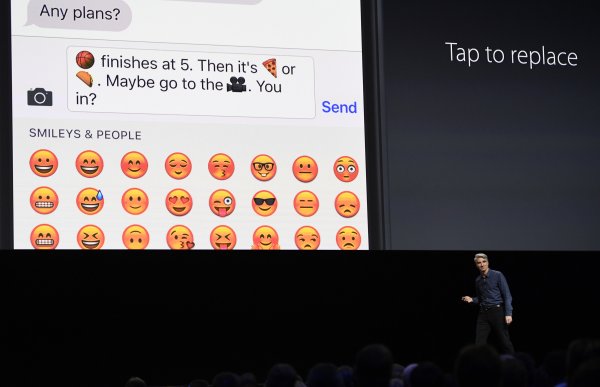 10 Ways Text Messaging on Your iPhone Will Change With iOS 10
Next Up: Editor's Pick