Kareem Abdul-Jabbar: Trump and ISIS Depend on Irrationality

Donald Trump speaks during a campaign rally at the Tampa Convention Center on June 11, 2016 in Tampa, Fla.
Gerardo Mora—Getty Images
Ideas
By Kareem Abdul-Jabbar
Abdul-Jabbar is a six-time NBA champion and league Most Valuable Player. He is the author of the new book, Writings on the Wall.

“We are deranged,” laments the narrator of Karl Shapiro’s poem “Auto Wreck” as he stands with other rattled witnesses beside a bloody car accident. “Our throats were tight as tourniquets,/Our feet were bound with splints.” That’s how most Americans feel following the mass shooting at an Orlando nightclub. We are deranged, the walking wounded—collateral damage of such brutal attacks, shuffling through our days looking for rational explanations and desperate solutions.

That’s why it came almost as a relief when the shooter declared his connection to ISIS. Now we had a name for our enemy, a target of actual villains to fire our rage at. The rants and fist-shaking began. ISIS blah blah blah. Muslims blah blah blah.

ISIS is indeed an enemy—to America, to Muslims, to the world—one that should be destroyed as quickly as possible. But we have to identify all the enemies we must fight, not just the easily targeted one that meets our need for vengeance. The satisfaction at identifying a concrete and familiar enemy allows us to be distracted from the damage being done to this country by those who also bear considerable guilt. Politicians profiting off hindering legislation to ban assault weapons are also villains here, AS are those who would exploit this tragedy for personal gain.

Every shooting brings the same cry for banning assault weapons like the one used in the massacre. And every time it fails, despite the fact that over half of America wants stricter laws around the sale of guns. Since the ban on assault rifles was lifted in 2004, assault-style weapons have been used in 14 mass shootings, 7 in the last year alone. When we examine the 10 mass shootings with the highest number of people killed and wounded, 7 of them involve assault rifles.

These rifles are so easily obtainable that an al-Qaeda spokesperson encouraged followers in America to go to gun shows to stock up on assault rifles because most states don’t require background checks for guns sold at gun shows, nor IDs to buy guns from private sellers. About 80 percent of the mass shootings since 1982 were committed with legally purchased firearms, according to Mother Jones.

Congress was elected to protect our children, not sell them out for campaign contributions from gun manufacturers and the NRA. They can yammer about the Second Amendment all they want, but that’s just another smoke screen so we don’t notice that their jobs are paid for with our children’s blood. Who really needs assault-style rifles that can kill 50 people and wound 53 more in a matter of minutes? Libertarian presidential candidate Gary Johnson claims the people need them to fight off “a growing police state.” Johnson believes when citizens have assault weapons, the government is more likely to grant them due process. Read that again; it’s as crazy as it sounds.

Not as crazy as Donald Trump using this as an opportunity to dumb-down America through fear-mongering. Anxious to make us forget the debacle of his racist remarks about the judge in the Trump University fraud case, he went off the offensive by being offensive. He has blamed Muslims for not turning in suspected terrorists he called the Orlando shooter “an Afghan,” even though he was an American citizen born in New York City; he has implied that President Obama may be a terrorist sympathizer.

Nothing on restricting assault weapons.

America looks to these national tragedies to reflect on our values. The problem with some fundamentalists—whether Christians, Jews, or Muslims—is that they want to impose their values on us through violence because they know rational people won’t accept their twisted visions. By attacking a gay bar, the shooter may have thought he was uncovering America’s corrupted values. Instead, he illuminated what America stands for. The hundreds of people donating blood, the thousands donating money, the millions sending prayers. It’s proof that American values evolve over time to be inclusive, tolerant, supportive. We may falter now and then trudging up that steep hill, but we always get up and continue the climb.

What’s really under attack is rational thought, with terrorists on one side and self-serving American politicians on the other. Trump, like ISIS, is really a symbol of this irrationality. They both appeal to those who feel powerless and inferior because they refuse to look at facts, weigh evidence, use logic.

The witnesses to the horrific accident in Karl Shapiro’s poem can find no rational explanation for the tragedy, and it scares them. They can find no peace because the randomness of the accident: “Cancels our physics with a sneer,/And spatters all we knew of denouement/Across the expedient and wicked stones.”

We have to do better. First, we mourn. But then we fight the threats from irrational terrorists, no matter what side of the border they live on.

Abdul-Jabbar is a six-time NBA champion and league Most Valuable Player. His forthcoming book, Writings on the Wall: Searching for a New Equality Beyond Black and White, will be released this summer. 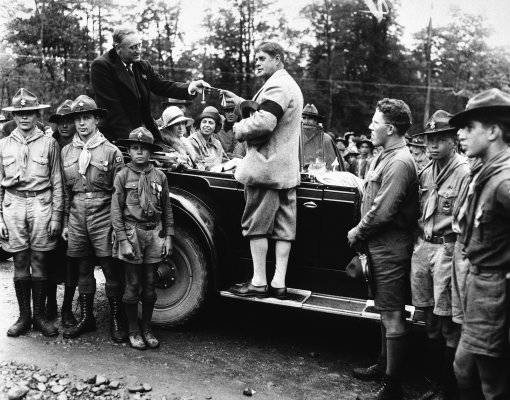 Here's Why The Boy Scouts of America Received Federal Recognition 100 Years Ago
Next Up: Editor's Pick