Cleanup workers in Florida’s Lee County got lucky on Monday: the 11-foot alligator that was stuck inside a storm drain had already died.

The Department of Transportation crew found the alligator inside a catch basin, which is a four-foot-wide drainage section a few feet before the ground, local station WPBF reports. Apparently, a caller reported a “bad odor” coming from the catch basin, which alerted the DOT crew to check out the situation. They ultimately removed the already-decaying reptile and got rid of the remains at a designated dump site.

The DOT director told WPBF that the 11-foot monster was indeed “an abnormally large gator,” but the crew is not unaccustomed to dealing with these situations, as they get calls about twice a year regarding alligators. Just another day on the job in Florida, which has recently given us a slew of alligator sightings, including this massive specimen seen sauntering across a golf course, this 9-foot beast spotted with a body in its mouth, and this giant that was shot by hunters. The largest alligator recorded in Florida came in at a little over 14 feet long. 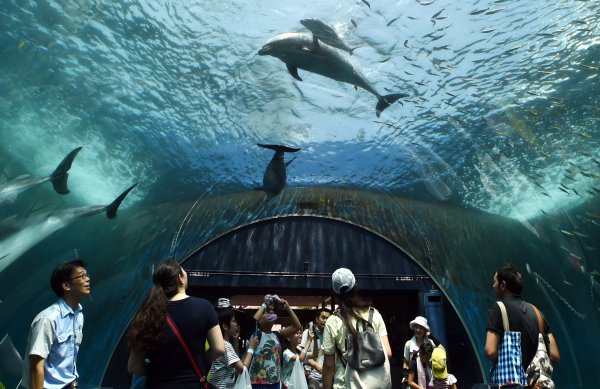 National Aquarium Will Move Dolphins to Protected Habitat By 2020
Next Up: Editor's Pick