YouTube videos posted by the father of the Orlando shooter over the last several years show him devolving from amateur pundit on Afghan politics to a man who appears to be suffering from delusions of grandeur.

A naturalized American who came to the U.S. from Afghanistan in 1986, Siddique Mateen has a Facebook following of more than 10,000 and has been airing an amateur interview show on YouTube called the “Durand Jirga Show.” He told TIME that he is founder and CEO of an organization called “Durand Jirga,” a religious nonprofit devoted to resolving the dispute over Afghanistan’s border with Pakistan.

Mateen started the recordings in 2011, and they became more preposterous since, with him wearing Army fatigues at points, several Afghanistan observers say.

Seddique Mateen inside his home in Port Saint Lucie, Fla. on June 14, 2016.
Christopher Morris—VII for TIME

In an interview, Mateen first said he wore the fatigues in the video because “those are the clothes I wear,” then said he bought them for Halloween. He said he paid about $100 for them.

In several videos translated for TIME, Mateen announces himself as the new president of the country and asks all government employees in Afghanistan to obey his orders and no one else’s. He subsequently orders the arrest of the real Afghan president, Ashraf Ghani, as well as several other senior officials, whom he refers to as traitors. He even encourages his supporters to strike Ghani, if not worse.

“We want to find a hero to take the turban off Ashraf Ghani and slap him a few times and very hard,” Mateen said.

He said the last time he had been to his home country was in 2014.

“From my popularity, they feel in danger,” he said. Mateen boasts that he has 20 million followers in Afghanistan, and that some of his videos have gotten up to 20,000 views.

Some of Mateen’s videos are aimed as getting Pashtuns, who live in both Afghanistan and Pakistan, to unite against other rivals. In some videos he criticizes the Taliban, and in others he credits them for bringing Pashtuns together. “Our brothers in Waziristan, our fighting brothers in the Taliban movement and national Afghan Taliban are rising up,” he says in one video.

On Tuesday, days after his son Omar Mateen killed 49 people in an Orlando nightclub in what is now considered the deadliest terrorist attack on American soil since September 11, the elder Mateen condemned the Taliban. When asked about the apparent support he voiced in his videos, he said, “Those are the killers. They kill the people of Afghanistan. You think I support the killers?” and added, “I wanted to bring the peace, and the Taliban is the main problem.”

When pressed further, he said “the translation must be wrong.”

The videos show an obsession with the Durand Line, the border between Afghanistan and Pakistan that was demarcated in the late 19th century in an agreement between a British diplomat, Sir Mortimer Durand, and an Afghan king, Abdur Rahman Khan. The division left the Pashtun ethic group on both sides of the border and is viewed by some in the region as an unnatural place for dividing people.

Indeed, there are tensions over this border to this day. But that doesn’t mean Mateen is a considered a legitimate voice on the issue, says Barnett Rubin, a renowned expert on Afghanistan and South Asia.

“A few years back, Siddique Mateen popped up out of the blue and starting sloganeering on the Durand issue,” Rubin, the Senior Fellow and Director at the Center on International Cooperation at New York University, told TIME.

“He’s a megalomaniac. And according to all of my Pashtun contacts, he’s totally unknown and totally irrelevant,” Rubin says. Rather, Mateen’s longing for his homeland may have one awry. “In any long-time exile community, you have people who develop an idée fixe about an issue, and he’s an example of that. It seems to me that he has a personality disorder,” Rubin adds. “And if you think like that, your son might have a problem as well.”

As he smiled calmly for a portrait photograph on Tuesday, Mateen said matter-of-factly, “I am the President of the provisional government of Afghanistan,” when asked about why he made the videos.

Mateen also rails against the evils of Pakistan, ISIS and a variety of other prominent figures involved in U.S. policy in Afghanistan, such as Zalmay Khalilzad, who served as Washington’s ambassador to Kabul. In all of the videos he is focused on a fiercely specific, nationalist view of Afghanistan. But in none of them does he espouse violence against Westerners, non-Muslims or homosexuals. However, on Monday, he posted a video on Facebook in which he said “God himself will punish those involved in homosexuality,” according to a Washington Post translation. The video has since been removed.

Seddique Mateen outside his home in Port Saint Lucie, Fla. on June 14, 2016.
Christopher Morris—VII for TIME

In many of Mateen’s most recent videos posted on his Facebook page, he is wearing fatigues, as if serving as commander in chief. And particularly chilling, just 12 hours after news of his son’s massacre broke, Mateen added a new picture to his page. It features his own image, looking presidential in suit and tie, emblazoned on a green t-shirt with his would-be title, looking as if he were running for office.

“I was here,” he says, raising his arm in the air,”and now he brought me down to there,” he points to the floor. “This stupid boy.”

Mateen says he will not resign his self-described role in the Afghan provisional government because of his son’s attack. “My son did this and I dishonor him, why should I resign?” he says. “Now my fight against terrorism is doubled, stronger.”

When pressed, Mateen gave an answer that is becoming something of a familiar refrain. “It’s not about politics,” he said. “It’s a very sad day.” 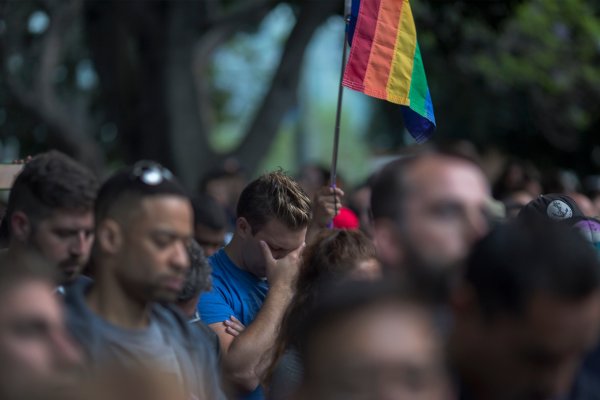 34 Years of Mass Shootings in One Chart
Next Up: Editor's Pick