What You Still Don't Know About Abolitionists

An engraving of fugitive slaves fleeing from Maryland to Delaware by way of the Underground Railroad, 1850-1851.
Universal Images Group / Getty Images
By Manisha Sinha

History is shaped by actors great and small. When most Americans hear about the destruction of slavery during the Civil War, they think of President Abraham Lincoln’s Emancipation Proclamation. But on the anniversary of Juneteenth—the day former slaves in Texas celebrated emancipation, on June 19, 1865, when the Union Army reached them—it is important to recall the central place of the enslaved themselves in the movement to abolish slavery. Thousands of slaves ran away to Union Army lines from the very start of the war and helped initiate the process of emancipation. They were simply doing what runaway slaves had done before the war: voting with their feet for freedom.

Fugitive slaves radicalized abolition by their tactics, contributing to the growth of the Underground Railroad. While we are well acquainted today with the derring-do of Harriet Tubman, soon to adorn the front of the twenty-dollar bill, Tubman was not alone. Many abolitionists made “running off” slaves a quintessential form of abolitionist activism.

The black abolitionist Leonard Grimes was arrested and jailed in Virginia for assisting fugitive slaves. Grimes eventually moved to Boston where he pastored the Twelfth Baptist Church, which was known as the “fugitive slave church” because so many of his congregants were runaways. White abolitionists were also imprisoned for their fugitive slave activism. Charles Torrey died in a dank Maryland jail, Jonathan Walker’s hand was branded with the initials SS for Slave Stealer in Florida and Calvin Fairbanks was released from a Kentucky jail only after the Civil War started. The abolitionist Laura Haviland confronted bloodhounds during one of her forays to the south. John Parker, a former Alabama slave, was perhaps one of the most daring conductors of the abolitionist underground along the Ohio River. Parker’s narrative abounds with military terminology when he describes his escapades, which resembled tactics of guerilla warfare and insurgency.

Nothing united the different factions of the abolition movement better than the fugitive slave’s desperate bid for freedom. Fugitive slaves abetted by abolitionist vigilance committees, antislavery lawyers and politicians moved the issue of abolition into northern state- and courthouses. Northern personal liberty laws—attempts to grant fugitives trial by jury and prevent the kidnapping of free blacks into slavery—challenged the extraterritoriality of southern slave codes and the fugitive slave clause of the Constitution. The preeminent abolitionist editor William Lloyd Garrison condemned the criminalization of blackness after the passage of the draconian Fugitive Slave Act of 1850, which compelled Northern citizens to participate in the capture of fugitive slaves or anyone thought to be one. It could easily make every black person a suspected runaway and facilitated the kidnapping of free blacks, as in the now well-known case of Solomon Northup. As the fugitive slave abolitionist Jermain Loguen of Syracuse, N.Y., wrote, “It outlaws me, and I outlaw it.”

The Underground Railroad arose in areas in the north that already had significant free black populations and abolition societies. These nodes of abolitionist activism—Boston, Syracuse, Christiana and Oberlin—became the sites of dramatic fugitive slave rebellions in the 1850s when abolitionists resisted the implementation of the fugitive slave law. The actions of fugitive slaves foretold the defection of runaway slaves into Union army lines. “Self-emancipated slaves,” as Garrison called them, also found their way into Indian territory, Mexico, Canada and the Caribbean, and even stowed away in ships all the way to Britain, making their freedom claims the stuff of international law and diplomacy. Long before the booming of guns, the enslaved and their allies were involved in a long-drawn out battle with slaveholders.

The daring activism of fugitive slaves also revolutionized abolitionist discourse. Slave narratives came to constitute the movement literature of abolition. In detailing the horrors of slavery, whippings, family separations and backbreaking labor, they provided an effective riposte to the proslavery argument that painted a picture of benevolent slaveholders and contented slaves. It was recounting and writing a firsthand account of his experience in slavery that made the great black abolitionist Frederick Douglass a leading light of the movement. Slave narratives inspired popular antislavery novels such as Harriet Beecher Stowe’s runaway bestseller (pun intended), Uncle Tom’s Cabin. Stowe listed the narratives from which she had drawn material in her Key to Uncle Tom’s Cabin when slaveholders and critics challenged her portrayal of slavery.

The abolition movement was an interracial radical social movement of disfranchised people, men and women, white and black, free and enslaved. Slave resistance lay at its heart. On this Juneteenth, it is important to recall that African Americans were not passive recipients of the gift of freedom but architects of their own liberation.

Manisha Sinha is the author of The Slave’s Cause: A History of Abolition and Draper Chair in American History at the University of Connecticut, Storrs. 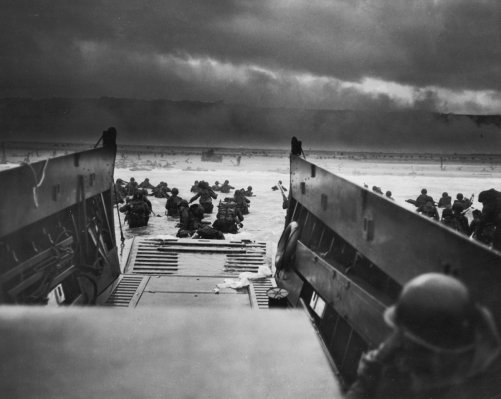 The D-Day Myth About Winston Churchill’s Pet Project
Next Up: Editor's Pick